Currently under a revamp!

Wolf Fang is carefree, independant, and smart. He loves a challenge, and gets bored pretty easily. He is athletic, but also enjoys scrolls and learning. He is very social and is not afraid to try new things. He is loyal to you if you can gain his trust, but it is hard to get even a little bit of trust from him. He is not lazy, but is fine with other dragons doing his work for him. He also loves flirting occasionally, and he's definitely a player. He has a certain wit and charm about him.

For his whole life, Wolf Fang has put his interests before those of everyone else. He uses his charm to get his way, and from an early age, he was a bit greedy. He's always wanted a life of excitement, and he isn't the type to settle for what he has. He pursues his goals, and he pursues them relentlessly. At one point, he used it to get through school, but now he puts that determination to use for stealing and getting what he wants.

Wolf Fang is lean and wiry. His build is athletic, and his wings are large and strong. Although he may look weak, his thin build hides strong muscles and powerful wings. He is a bit faster than an average DeathWing, and it is thought that perhaps he might have inherited some SkyWing blood from his father, who was rumored to be a distant SkyWing hybrid. He has sleek black scales that are slightly transparent. His eyes are stunning amber, and they sparkle like gold in the sunlight. His mask is shiny and polished, and it glimmers in the light of the stars.

Wolf Fang has corrosive vapor  and thin scales. He is also skilled in combat. His weapons of choice are daggers and throwing stars. His athletic build helps with his finesse and ease in combat.

Wolf Fang was born in Cliff Raize. He had two loving parents, Shaded Peak and Half Moon, and he also had a sister, Dripping Icicle. They got along well, and he had a pretty good dragonethood. His parents worked in the city, his father as a blacksmith and his mother as a healer. Because his parents were often busy, they enrolled Wolf Fang and Dripping Icicle in school at an early age. That's when things got interesting for Wolf Fang.

Dripping Icicle was a model student. However, that wasn't the case for Wolf Fang. He made good grades, but he was also a troublemaker. He would act up a lot in class. His favorite hobby was playing truth or dare with the other dragonets, and then doing whatever stupid stuff they dared him to do. When he was five, beginning his teenage years, he got into stealing. He hung out with a few friends who were bad influences, and they got him into small stealing, such as pickpocketing and shoplifting. Wolf Fang loved the thrill, and he enjoyed being able to get new things without having to buy them. He took up stealing as his new hobby.

Despite his habit of theivery, he was easily accepted into combat training because he had managed to keep his record clean. He never got caught in those early years, and it paid off. He went into combat training at the age of 6. Dripping Icicle followed in the footsteps of their mother, and trained to be a healer. Wolf Fang, however, took a different path and went into combat training. He studied hard, as he was determined to succeed, and he passed his exams with flying colors. For a few years, he was a guard at one of the outposts. Then, one day, he met up with his old friends and planned the biggest theft of his life.

Wolf Fang wanted to get rich. He knew the Lady must have some treasure, so he and his friends went to try and steal it. They nearly got away with it. His two friends escaped with the treasure, but Wolf Fang was injured and got caught by a guard. He faced a trial, and then he was exiled from the DeathWing Kingdom.

Once he was exiled, Wolf Fang became a wandering thief. He roamed across Phyrria, and eventually he made his way into the Scorpion Den. Life there suited him well, and he was actually pretty happy. However, as usual, he got bored. He started traveling again, and he ran into another nomad. She was a NightWing, and her name was Shadowchaser. She, too, was on the run from her tribe. Wolf Fang offered to buy her a drink at the nearest tavern, and they soon bonded. They quickly bonded, and their relationship grew from there.

They had a lot of similarities, which helped their dynamic. Their personalities even matched, and that made for some interesting banter between the two. They fell for each other. Around the time he was twelve, he and Shadow had two eggs. They were the sweetest little hybrids he had ever seen, but little did he know, the two dragonets had quite an interesting life ahead of them...

"Can I steal your treasure while you stay here at the bar? Okay, thanks."

"You know, I'm kind of surprised that I get away with so much. Really, dragons these days should be a bit more observant." 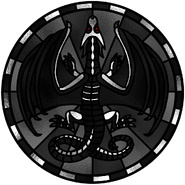 Sigil by Platy (I think) 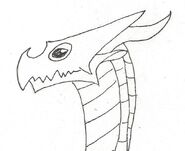 Base by Resa
Add a photo to this gallery

Retrieved from "https://wingsoffirefanon.fandom.com/wiki/Wolf_Fang?oldid=2296734"
Community content is available under CC-BY-SA unless otherwise noted.