Start a Wiki
verglas
“Like the bark of trees & the soil beneath us, the color brown is for support.”

Statuses: alive - royal, bigwings
This character belongs to Fear. Please do not tamper with this page's content. Also do not take any concepts from this page, thank you.
Appearance

Being notably larger in size than the others surrounding them, Verglas is the bigwings of the royals, the eldest daughter to the throne of Queen Axinite - yet to most, they do not uphold the appearance of a royal. In fact, they are often confused for the role of a prince or royal guard instead of being the current heir. With all of the 'they's and 'they're's, one can also safely assume that based upon their androgynous appearance they prefer the same treatment in regards to their pronouns.

Verglas' build is a mix of fit and slim for MudWing standards. Their head is flattened, as well as widened, yet it still holds a slightly disproportionate look to them with the thickness in their neck. Being slim for a MudWing - a bigwings no less - one expects the limbs to be slimmed too. The tail of the royal is narrower, noticeably longer in length than others. The texture of their being seems to be hard with a cold temperature; Ver's scales are presented with bumps and little nicks from a frosted appearance. The membranes of their wings also take upon a rougher feel due to this. With further inspection, one could decipher that she spends time up north with her typical scent of pine and (in general) the cold. One could also, at times, likely hear the shifting of weight much like trying to walk through a massive cluster of branches or through thick snow and ice. Mayhaps even both? Verglas' scales have a sound that equates to this, though it is not upsetting to hear. Some find it to be a soothing way to present themselves.

Though, the stiffness of the royal heir to the MudWing throne is not to be taken lightly. As a MudWing, they are still more than capable of handling their own in fights. Their noise assists them in wintry weather up north, but can still be burdensome regardless. They can move fast when they want to, and still blend in with their colors.

With primary scales of teak, and underscales of pine, most think that Verglas truly may be one with the forests. Their talons glimmer with the colors of ebony, spines and horns matching accordingly with streaks of the color. Naturally, the spines and horns of Verglas are a touch lighter. Secondary colors on the MudWing are presented bestly by the colors of deep cedar wood. Oddities are exhibited in portions among the topside of Verglas - in varying hues, from the head to the tail tip, there's a strange birch pattern; both in coloration and pattern. Their wing membranes are presumed to be a similar shade of cedar, if not a lighter shade.

Verglas also appears to have speckles of muddy brown in some aspects of their scales. What seems to top off their appearance though, seems to be the frosted, icy look to their light brown eyes. They take pride in their eyes, but do not find it to be their best or most notable feature. To them, they do not uphold any naturally attractive features. However, they do decorate themselves up at times. Most of the time the royal can be found wearing a pair of silver spectacles. On occasion they adorn themselves with silver earrings or necklaces that may contain icy gems, or a series of axinite cuts. Verglas seems to never take off a ring on their left paw which contains an axinite gem on it in regards to her relation to Queen Axinite.

While not known for being a beauty like their mother, Verglas is arguably the most reliable, trustworthy, and honest of her family. MudWings are known mostly for their visible strength, but they can also show their emotional and mental prowess if it is necessary to do so. They're a very capable individual, able to get things done rather quickly and efficiently when it comes to projects, meetings, or contracts of some sort.

Being a comrade to Verglas is something like being part of the family, being part of their troop. If you've gained enough of their trust that is. Outside, they do seem rather quiet, but it's not intentional. They sinply have the preference of observing and remaining reserved. To delve deeper into their personal thoughts and lifestyle, you need to be able to handle building a strong bond with them beforehand.

Though not known for being a comforting character, they will be around to talk things out with you if they must be or happen to already be there. They will not proceed with whatever else they have to do until the current situation is tackled and handled accordingly. Verglas is a strong believer of getting things done fully, as well as maintaining stability between others.

Despite seeming rather passive and pacifistic, Verglas is still a capable fighter and will defend herself. Her dominance is asserted in a motherly manner rather than through brute force and harsh words alone. They are not judgemental, and will not scold you for your beliefs or opinions. Though they may debate, they do not intend harm. They seek peace. To that they follow a motto, a well known one oftentimes phrased as "to each their own" - this could be in regards to opinions, in pacing, in thoughts, memories; they are patient and willing to accept others for who they are. They may offer advice on how to tweak certain aspects only if the other is unhappy with their current stance. Verglas very much enjoys the idea of living one's life to the absolute fullest, regardless of the bumps in the trail.

Verglas hatched during the last light of the moons before sunrise on a cold evening. They struggled pushing through the shell of their egg, but eventually prevailed. By the time the eldest MudWing dragonet was out of the egg and assisting their siblings, the sunlight was already beginning to slice through the darkness. With light aiding the hatchling, they continued their mission of helping the two other shells break. It took time, and after the Queen and King had awoken from their slumber, they'd been greeted by the chirps and coos of the three dragonets.

Axinite had questioned which of the eggs hatched first, since Verglas hadn't exactly looked much bigger than Basswood or Andisols. The younger dragonet duo was named first, in fact. But the moment Axinite noticed the bigwings' icy eyes, her decision was final. How they figured out Verglas had been the first to emerge was through the texture of the shells, and the fact the dragonet held the coolness of the night upon their scales.

(im not the best at writing histories/backstories so i usually leave them blank until the end. forgive me, i will work on this) 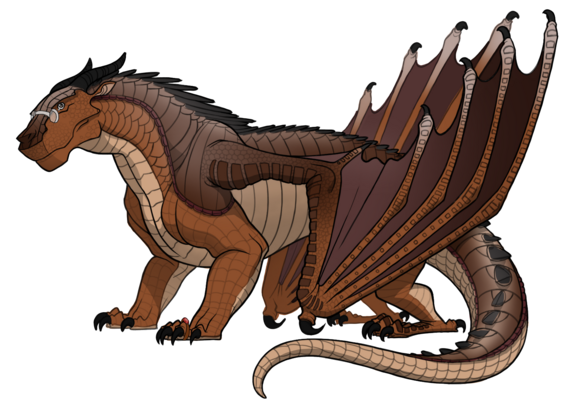 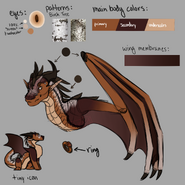 coloration ref
Add a photo to this gallery
Retrieved from "https://wingsoffirefanon.fandom.com/wiki/Verglas?oldid=1788612"
Community content is available under CC-BY-SA unless otherwise noted.