This is my sona, claws off, yada yada, thank you! The coding was done by NightStrike, please do not take it!

Appearance
Fantasy is a petite but curvy dragoness, with a small frame and fragile build. She is obviously a hybrid, with her spring green aquatic marks below her eyes, down her light grey wings, and down her SandWing horns.

Mostly, she looks NightWing, that is, if NightWings were pale pink. Her underbelly is a light blue, and in place of silver stars, she has light turquoise, green, and sand-colored speckles on her wings. Her tongue is black, and her snout is slightly chubby. Fantasy's tail resembles a SeaWing's. Her pupils are a cobalt blue; her sclera is black.

When it comes to apparel, Fantasy wears loose tank tops, khaki shorts, sundresses, pearl chokers, and sandals. She usually has body glitter on her shoulders, face, neck, and wings, and many Kawaii accessories, such as bows, clip on earrings, and necklaces.

Personality
Fantasy is quite the enigma. She can be described as bubbly, cheery, thoughtful, creative, wistful, and sometimes a bit loud. She loves art, glitter, SPACE, aesthetics, fun movies, and making up games. She can be pretty curious, which often leads into trouble, and "leap before you look" is somewhat her motto. She has many minor injuries from her adventures, but after something happens, she doesn't get a phobia, she just learns from her mistakes and keeps going.

Fanty loves reading, playing her guitar, listening to really loud dubstep-instrumental music, and organizing her mineral collection. She is also a blogger, and writes posts about conservation, her favorite topic is saving the ocean.

Fantasy can be quite the dreamer, she truly shoots for the moon. Some tend to not take her seriously at the first glance, but she can be really mature and professional for jobs, or things that call for seriousness.

She's very fanciful, and enjoys staring at the sea, turning upside down off couches or trees (yes she's fallen a few times), and star-gazing. Nature is her biggest muse.

When it comes to other dragons, she can be mildly shy, but if you open up first, or mention a topic she adores, she'll light up and act herself. But if she sees someone sad or in need of comforting she'll push through her shyness and talk to them.

Fantasy can be really kind, thoughtful, and selfless, she is also, surprisingly, a good listener.

Fantasy hates stress, so her key to beating it is going up in her room, blasting the AC, turning up some really loud Lindsey Stirling music, and karaoke away. She also paints, plays guitar, and sleeps on one of her gigantic plushies.

Fantasy can be snappy, only if she has a sugar crash, or you mess up a drawing, or break a mineral of hers. Her snappiness equals loud squabbling, pokes, and some angry squirrel noises. If she's really mad, she'll hiss.

Fan HATES violence, it makes her mind crazy. She actually only watches family friendly cartoons, the same goes for books. She also hates cruelty, the sound of screaming, anything gory, and bullies. She HATES bullies, or anydragon who points out flaws in others. This makes her fuming mad.

She's also really loyal. When it comes to family and close friends she'll defend you like a mastiff-in-waiting. Which can get annoying because she gets super nice with her friends, and offers a bit too much. She'll also defend you without stop, she's totally like a puppy. Sweet, lovable, loyal, and fierce.

Despite her strong mindset and stubbornness Fantasy can be emotionally hurt really easily. If you yell at her, or say really mean things she won't forget it, though she can't hold grudges for long, and she openly forgives, she'll still feel hurt. Even if the dragon who said it long forgot.

Fantasy also LOATHES conflict. it makes her want to crawl under her bed and put her claws in her ears. It makes her stomach twist into countless little knots. She always acts like the median. The dragon who tries to calm everyone down with kind words and worried smiles, but usually gets yelled at in the process. She hates it. But arguments is one of her fears.

Overall Fantasy is a pretty likable dragon. She's pretty sincere, but she can lie. Since she wants everydragon to like her, she can get scared and make a quick lie up if she does something wrong. This is something she's working on.

But despite her flaws, she's pretty nice...Beware the frequent unexpected tackle hugs though. XD

Relationships
Please ask in the comments below to be added!

Dreaming
AWESOME tribrid girl! ~Fantasy
Fan thinks of Dreaming as a really good pal, as they both have a lot of similarities. She knows Dreaming is very strong willed, kind, and loves animals, also she can be pretty witty too. Overall, Dreaming is one of Fantasy's close friends.

Stormbreak
"COOL, somewhat edgy, but really nice hybrid!" ~Fantasy
Fant thinks Stormbreak is really awesome, smart, and a great coder and artist. She knows they put off an edgy, antisocial, maybe intimidating vibe. But she believes they're really nice inside, and loves chatting and yelling with them! Fantasy also enjoys looking up edgy-cool aesthetics for them.

Peri
"Pretty, funny SandWing girl! I think she's still made that I ate all the marshmallows for her smore's though !" ~Fantasy
Fantasy likes Peri, but doesn't know her that well. She does know that she can be really friendly and witty when she's in a good mood. She likes going camping, and making smore's with her. Their last outdoor escapade resulted in Fant eating all the marshmallows for the smore's and Peri throwing the empty bag at her. XD. They ended up just eating the chocolate and graham crackers.

Lykaios
"Noice, clever, HP fren!" ~Fantasy
Fantasy admires the wolf-lover, and thinks her knowledge and creativity are really cool! She also enjoys ranting on about how awesome Tonks is. And other HP related things. "Fantasy enjoys playing guess which author wrote this quote" with Lyk.

Firestar
"AHHHH HE IS A FLOOF!!! I wanna huggle him!!!" ~Fantasy
Fantasy, being Fantasy, really wants to hug him and thinks his fur is SO SOFT. Despite her loving cats, she feels really bad about him having his curse, but it seems like he's ok with it now. Fant also thinks he's super nice, and considers him a pal.

Calico
Fun, pretty, twinsie!!! ~Fantasy
Fantasy thinks of Callie as a total twin! They both have SO much in common. She loves hanging out with the awesome hybrid, and thinks she looks super pretty. She also thinks her writing is AMAZING!!!

Blue Raspberry
Awesome slushie loving boi!!! ~Fantasy
Fantasy really likes the slushie loving fellow tribrid, she also loves he's a dreamer, just like herself. Fant enjoys play fighting with lightsabers, since she's a fellow Star Wars geek, and she always lets him have the blue saber. XD. She overall thinks he's awesome, and is one of her close friendos.

Nell
Sweet, super pretty, plant loving bae Also she looks like chocolate! AHHH!!! ~Fantasy
Fant really, really likes Nell! She thinks she's super smart, sweet, and super pretty! They both love girly things, plants, and bubble tea. She doesn't know her that well, but she's visited her often, and thinks its AWESOME she'll be the next ruler of Finnerbreak. Fantasy feels bad for her also, knowing that must put a lot of pressure on Nell. Overall, she sees Nell as an awesome girl, and hopes to hang out more.

Heartspring
Kind, funny, awesome floof who's also my boyfriend! YEEEEE!!!!! ~Fantasy
Fantasy totally thinks Heart is AWESOME, and loves going on picnics, snuggling, and watching movies with him. She thinks he's a super talented writer, and loves everything about him. Totally a dream couple, XD...She just had to get over the mental happy squeals since the first time he asked her out.

Sabotage (CB)
Kind of edgy, clever, space ship dude ~Fantasy Fant thinks Sab is really awesome, smart, and cool. She likes his fascination with history and spaceships, and relates to his love of classical music! Overall she thinks of him as a good friend, but would like to get to know him better. 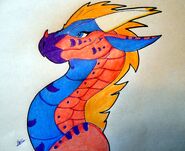 Fant by Pearl!!! TYSM she looks so cuuuuute!!! 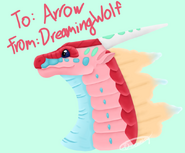 Fanty headshot by ADragonDreaming but gifted by Dreaming!!! <3 tysm!!! 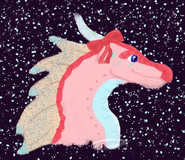 Christmas Fant by ADragonDreaming!!!!
Add a photo to this gallery
Retrieved from "https://wingsoffirefanon.fandom.com/wiki/User_blog:Dragonarrow5767/fantasy?oldid=2132800"
Community content is available under CC-BY-SA unless otherwise noted.