Tree Snake was made for the Oc Villans contest. She belongs to Queen Bluefire. Coding by me.

Line art by BFD, colour by me

"Your pain is my immense joy. Die!"

Whip-thin, small, and beautiful, Tree Snake looks mostly like any RainWing. She generally keeps her scales stunning, bright colours that dazzle her companions.

Her main scales are a light, almost minty green, and her underbelly is a pale cream, like the underbelly of a monkey. Banana yellow scales make up her eye and back ridge, while lolly pink dots follow the curves of her body.

Her delicate, stunning white claws are the same shade as her teeth, horns and back spikes. Tree Snake has a well muscled but still gentle body, and scales as smooth as polished river stones.

The membranes of her wings are a medium blue green, and the line of scales beside her underbelly are a darker cream. Tree Snake's eyes are white, with inky black pupils. Her eyes bore into everyone she meets, and other dragons melt under their intense gaze.

Tree snake carries herself tall. Always graceful, and serene, she seems like a cloud made into a dragon.

When Tree Snake was a dragonet, she was a much different dragon. Hardworking, strong-willed and easy to get on with, she played and laughed with her siblings just like all the other RainWing dragonets.

But it was not to last. Soon, the ignorant bliss of youth faded, and Tree Snake saw how the Rainwings bullied and ridiculed her albino father, Shard. This sparked a seed of angry hate towards the RainWings. She began to see them as weak, lazy, and she stove to be the very opposite to them.

Tree Snake is very intelligent, and is brilliant at tactical plans and puzzles.Easy to misjudge as weak or small, Tree Snake is a formidable opponent.She makes choices carefully and always strives to outwit her enemies.

Unlike most Rainwings,Tree Snake does not respect the trees or plants.She views them as tools and cover, part of the natural world that can be used to her advantage.Tree Snake eats meat as well as fruit, in a strange attempt to cast off all Raining ties.

Anger and rage may seem to be engulfed by her cold, calculating mind, but in reality, they govern most of her life. Tree Snake's soul is infused by the hate she bears towards the RainWings,and it boils and burns away her kindness.Maybe the right dragon could get rid of it, but for now, she battles with it to stop it gaining control.

Tree Snake strives to be better then her fellow RainWings.She is a perfectionist, and hates to see mess or dirt.Her living space is always perfectly clean, and without any sort of personal touches.

Though it may appear that Tree Snake is patient, in reality she is not.Tree Snake gets discouraged very easily, and prefers to lurk and change other dragon's plans then build her own. Tree Snake believes that she was born into the wrong tribe, and the idea of one united Pyrriha appeals to her.

Though at first she appears to have no weaknesses, Tree Snakes has many which she hides beneath her icy scowl.Tree Snake is colour blind, and she is deeply afraid that her order will find out and kill or throw her out because of it. Placing herself above overs, she is arrogant and fairly self-centred. She hates to be ordered around and will often disobey in some small way just to spite that dragon.

Like a vengeful wraith she never forgets a grudge, however small or insignificant it may be. Tree Snake has no friends, only enemies, as she steps on everyone to push herself higher.

She has all the normal RainWing abilities, and is a master at venom spitting and camouflage. She has taught herself to fly almost silently, and can sneak up on someone as easily as you might peel a banana. Her venom spitting is legendary among RainWings, and some say she can hit a fly from the air with a single drop of venom. This, however, is a tale her children spread to cause fear and awe. Tree Snake has the mind of a snake: cold, clever and calculating, the perfect recipe for an evil mastermind. She believes that she is superior to almost every dragon, and treats everyone as if they have the mind of a slug.

However, she is frustrated by the huge size difference between her tribe and the others. Rainwings, as the smallest of the tribes, can not hold their own for long in a claws on battle with a full grown SkyWing or MudWing, or any of the tribes for that matter. Because of this, Tree Snake has taught herself to use many kinds of weapons including knives, throwing stars, spears and chakrams. She hates the traditional Rainwing weapon,blow guns,because she thinks they are cowardly and weak, just like her tribe.

"Relationships are for heroes."

Her son Acid is one of the few dragons she actually cares about. Even though she sees him as a useful tool, Tree Snake harbours a secret love for him,though she shows it rarely. Tree Snake often gets exasperated and frustrated by his questioning personality and would prefer he follow orders, not ask why he was doing them.

Tree Snake's daughter Spoonbill is the closest to her asides Acid. Tree Snake favours her because she is so adoring and easy to please. Tree Snake, for all her coldness, loves her daughter very much deep inside and would kill anyone who tried to hurt her.(It helps that she is such a useful dragon). She has a tendency to see Spoonbill as a tool, not a dragon, and sometimes forgets to treat her as one.

Tree Snake respected her father, and hated the way the RainWings would scoff and mock at him. He was the only albino RainWing in living memory and was strong willed but gentle towards animals and dagonets. He always stood up to his foes with a fierce torrent of words that inspired Tree Snake be strong too. Shard always showed his dragonets and wife the respect that the tribe did not give him, and it was his love that sparked Tree Snake's anger at the RainWings.

Part Two:Out of The Rainforest

"Art. Such a beautiful waste of time." 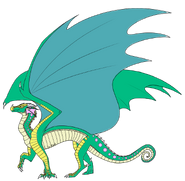 Jada!
Add a photo to this gallery
Retrieved from "https://wingsoffirefanon.fandom.com/wiki/Tree_Snake?oldid=2066421"
Community content is available under CC-BY-SA unless otherwise noted.