Trecento is a male LightWing with a bulkier, slightly taller build & stature than most. His paws and talons are spread slightly further, with his snout being a little wider and longer. His horns and spines are typical for a LightWing, with some features being notably different. His wings are known to be larger, having a pair of slightly larger eyes, and pretty floppy ears for his head. His neck is shorter, with his limbs being longer - you'd think of him as not being very proportionate; though when comparing each side to him, he's almost prefectly symmetrical.

Trecento the LightWing has slightly dulled lavender base scales, with the underbelly being a paler lavender. His top-side seems to be streaked with a very paled indigo, mixed with stripes of dark purple. Stripes are a recurring feature within the LightWing, proving him to be unique to others around him. Talons and horns of a similar dark purple, you'd confuse them to be black at times. His eyes match the color of his wing membranes, being a pink-ish tinged purple. The reflective scales upon his wings (and other parts of his body) seem to be a grey-ish pale purple. Some of these reflective scales are clustered in microscopic amounts to form the stripes near his underbelly, as well as the shimmering freckles that dance among his cheeks, wrists, shoulders, and ankles.

generalized: trecento is a very kind and loving LightWing. he has a very big heart, and a soft spot for orphaned dragonets. optimistic! wants to find good homes for dragonets and teach them wonderful things. also has a pretty good self esteem! he's pretty humble & modest. his anger is patient but when you get to the end of the wire with him he definitely shows it in some manner. (either in a snippy tone or flashing the scales of his wings) doesnt think much of these deities everyone's going on about. VERY MUSICAL LAD! has a very nice voice and will sing others to sleep if he knows they can't sleep! 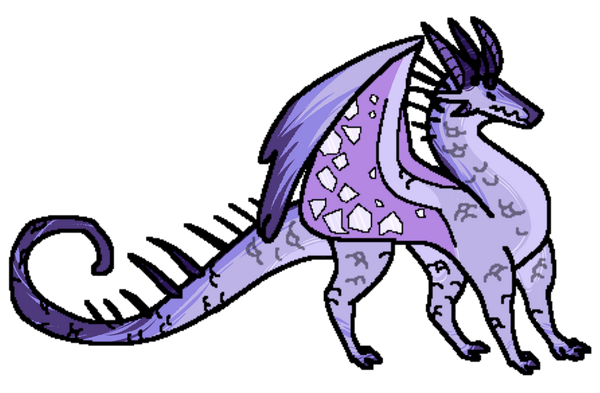 Retrieved from "https://wingsoffirefanon.fandom.com/wiki/Trecento?oldid=1597067"
Community content is available under CC-BY-SA unless otherwise noted.