Marx, coloured by me

To unite the SeaWings and the IceWings under his rule

A small, unnamed village in the Bay of A Thousand Scales

Being powerful, showing others what he's made of, winning fights, swimming

Being called small, being underestimated, losing at anything, other animus dragons

"I am your prince, iceberg-head!"

He's pompous, arrogant, bratty, and has a bit of a height complex.

He's the most powerful dragon in Pyrrhia, being the only known animus alive (400 years before the canon timeline).

His name is Tempest.

Well, he would prefer to be called "Prince Tempest of the SeaWings and IceWings", although his great-aunt, Queen Remora, doesn't recognize him as a member of the SeaWing royal family and refers to him as simply "IceWing" or "Hybrid"--if she chooses to acknowledge his existence at all. And Queen Borealis refuses to recognize him as any kind of royalty--mainly because she doesn't want "pristine IceWing blood" contaminated by blood from another tribe...even if that other tribe has animus magic.

So Tempest has made it his goal to become the prince of both tribes, whether he's backed by anyone or not.

But he's also the first animus the IceWings have had in 1500 years.

Could he be a tool of the IceWing queen?

To put it bluntly, Tempest is small. Puny. A shrimp, a runt. Pathetically short. But he more than makes up for his meager size with his larger-than-life personality!

At first glance, Tempest may seem like an ordinary IceWing--silvery-white scales with hints of palest green, sharp spikes, and whip-thin tail. Look a little closer, however, and you'll notice his striking green eyes--a rare eye colour in IceWings, it's a trait he got from his SeaWing father. A tad closer, and you'll notice the tiny, emerald-green scales freckling his snout. Even closer, and you'll notice emerald green along his spine and sides under his wings. Closer still, and you'll notice his webbed talons with serrated claws--which are now wrapped around your neck as he snarls, "What're YOU looking at?" As he digs his claws into your scales, you'll catch a glimpse of faintly-glowing swirls and spirals on his wings--a sign of the SeaWing royal family.

But that's about all you have a chance to see before he slams his spiky tail into your head, knocking you unconscious.

She'd fled the Ice Kingdom after the incident that had landed her at the very bottom of the Seventh Circle--even though it wasn't her fault! But the shame and embarrassment were too much, so she flew as far from the Ice Kingdom as possible.

Once she'd reached the Bay of a Thousand Scales, she found a little island to rest on. But the next morning she'd woken up to a welcoming committee of sorts--half a dozen fierce SeaWing soldiers, led by the handsomest dragon Crystal had ever seen.

Well, things happened after that--things that are unimportant to this article, but which ultimately resulted in a green-and-silver egg.

Crystal knew she wouldn't be able to go back to the Ice Kingdom with an illegitimate hybrid dragonet in tow--she'd get punished for sure. So she raised Tempest on the peak of Jade Mountain, where the snow and ice would feel like home. All was well...until Tempest's animus powers were discovered.

He had been learning to hunt on his own and was getting pretty frustrated with one particularly juicy-looking hawk that kept slipping away from him. In his anger, Tempest yelled at it, "Stupid bird! Come down here right now and DIE!" The hawk zoomed into his talons and died instantly.

Crystal was dumbfounded to learn about her son's powers. She instantly decided that she would take him to the Ice Kingdom and present him to Queen Borealis to reintroduce animus magic to the tribe and hopefully be rewarded. 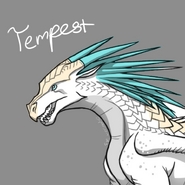 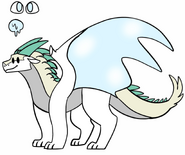 I totally forget who made this adopt--but thanks anyway, whoever you are!
Add a photo to this gallery
Retrieved from "https://wingsoffirefanon.fandom.com/wiki/Tempest_(SeaWingsareValid)?oldid=2172809"
Community content is available under CC-BY-SA unless otherwise noted.