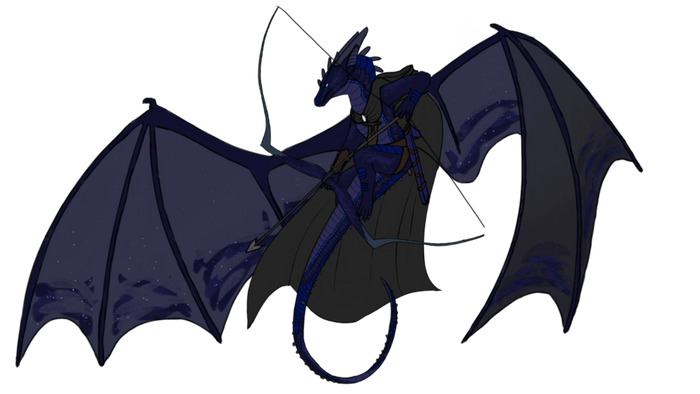 There are few dragons on the continent of Pyrrhia that can claim to be a Ranger. Known to be masters of stealth and archery, few know the true story of their order. Some love them, and some fear them. But all over, the select group is respected, even though they're shrouded in mystery. Talia is one of these Rangers. Her dark coloring gives her an edge over the other dragons who share the occupation, and her skill with stealth is nearly unrivaled. In the mountains of the TempestWing kingdom, Talia does her duty in her province to the best of her abilities.
This character is in the Canon universe.

Talia is small, which surprises most dragons when they meet her. Due to what she's done for the villages and towns in the area, the witnesses of her great feats have slowly exaggerated her stature, and many claim that she stands two heads taller than the tallest males. This is absolutely incorrect, but her small, wiry form shouldn't be underestimated to say the least.

Her structure is lean, and wiry muscle has been laid out on her body ever since she started training to become a Ranger. Her chest is an average size for a TempestWing, and her ribs aren't large to hold large organs such as the lungs. Talia has a strong and slim stomach, and has a feminine build, even if she doesn't act like it. Her neck is quite long, and she could easily disguise herself as nobility with her slim build - if she acted like nobility for once.

Her eyes are sharp and calculating, always in action. They are a light blue color, and have a cyan tint to them. Her eyes display lots of emotion, and it's hard for her to hide from dragons skilled at reading the eyes. She closes her right eye when she shoots her bow, and narrows the other for better aim.

Talia is often mistaken as a hybrid, even though she's pure TempestWing through and through. Her main scales have a slight cloud pattern to them, in a color ever so slightly lighter than the main scale color. On top of this, she has starry speckles that seem to move and glimmer when she moves, along with the cloudy pattern. Her wings have this pattern too, and most whisper about how they think that she has the blood of a NightWing running in her veins.

Talia almost always wears her Ranger's cloak, which is a medium gray. It is held in place by a light-colored metal circle clasp, and has a hood to cover her head. The fabric of a Ranger's cloak is believed by many to be enchanted by an animus, and it seems to shift colors based on the surroundings of the dragon. The perfect camouflage, Talia also wears it to cover her scars.

Attacked by a bear in her dragonet days of being an apprentice to a Ranger, Talia remembers the occasion by the long, vicious scars on her back. Five of them run down the right side of her spines, and they have a slight keloid quality to them, and are very rough to the touch. Talia hides them with her cloak in shame, and doesn't want to talk about the day she could have died, if it hadn't been for her former mentor.

Talia has a leather sash that carries her dagger, and this is the part of her clothing that she is least attached to. She doesn't use the dagger for fighting often, but does use it more than one would think in the wilderness.

However, her quiver and bow are never let out of her sight. The quiver is a shade of blue, and has leather straps around it to keep it safer (and prettier lol). It is on her hip, and she can easily pull arrows out quickly. Her bow rests nearby, and she has painted the majority of the bow to be akin to her galaxy-like markings. Her favorite weapon by far, Talia tends to it daily, caring for it like one might care for a pet. She wears a leather arm guard to protect her right arm from the tough string of the longbow. She chooses not to wear a finger guard on her drawing arm, preferring to develop callouses - you won't forget those in a rush.

All in all, Talia looks pretty average for a TempestWing, but her sharp gaze and stealthy movements set her apart from the other members of her tribe.

Talia is obviously an introvert, and really doesn't open up. She's really awkward around other dragons, even her fellow Rangers that she meets up with often. She kind of mumbles, but not because she's shy. It's just because she has trouble forming her thoughts into words, and tries to communicate without speaking. It works with her bird, but other than that, there are very few that can successfully carry on a conversation with her in her preferred method.

Strong-willed and determined, Talia won't back down from a challenge, even if it's one that is very unlikely that she'll win. She is still cautious about things, being a Ranger and all, but even so, she hates being talked down. If someone tells her she can't, she makes it her business to prove them wrong. She doesn't bow easily to authorities for this reason, and has trouble being formal and respectful like she should in their presence. Still, she follows the lead of some, and wouldn't trade her job for anything in the world.

Talia likes to get things done as fast as possible, and hates procrastinating. She wants to make everything painless and quick for those involved, and she tries to solve as many problems as she can before being told to stop and rest. This is one of the reasons she keeps her familiar, Gwylan, so close. He scouts out her next mission before she's even done with her current one. Her eagerness to solve problems is seen as a good thing by most who look at her character deeply, but Talia's haste on some cases has left some things unsolved, which she has yet to find out.

A free spirit at heart, Talia doesn't live in the village keep like some other Rangers do. She lives in the heart of her Ranger province in a small wood cabin, perfect for her needs. Simple but effective, she spends her free time just outside of it, tending to her longbow or familiar. She feels the need to roam, and often isn't even remotely near her cabin, and she loves to camp out in the woods.

The young Ranger is cautious, but doesn't think about things extremely deeply. She also doesn't look at things a second time, from her enemy's point of view, a trait that has gotten her deep into trouble multiple times. Talia is still a valuable Ranger however, and most of the older Rangers believe strongly that her weaker areas will develop with time.

Retrieved from "https://wingsoffirefanon.fandom.com/wiki/Talia?oldid=2023943"
Community content is available under CC-BY-SA unless otherwise noted.