Star is a rather small NightWing dragonet. She has dark blue-ish black scales, and a dark gray-blue underbelly and overscales. The teardrop scales running down her neck are dark gray, and her horns and spikes are pale silver. Her neck is unusually long, and she is covered in tiny white freckles that look like stars. Her eyes are a hue between pale purple and sky blue. Like all NightWings, the underside of her wings are black and scattered with silver scales, like a night sky full of stars. She has a short, diamond-shaped snout and silver claws.

She usually keeps her head down while walking, and avoids other dragon’s eyes. Her wings droop at her sides as though they are too heavy for her to carry them. The palms of her talons break into a sweat whenever she has to talk to a dragon she doesn’t know well, and her quiet voice comes out as barely more than a squeak. She flinches away when another dragon touches her, and often makes excuses just so she doesn’t have to talk.

Star is a sweet and nervous dragonet. She tends to think others are always judging her, so she finds it very difficult to make friends. She says that she doesn’t even want friends anyway, because she’s too busy studying. She is quite jumpy, and often stutters. When she was younger, her real parents abused her, which is why she feels so anxious all the time. However, even though she seems to be shy and awkward, she is actually very empathetic and always tries to think the best of every dragon she meets. She doesn’t like dragons that are stupid or think highly of themselves, though. She often wonders if she would be happier if she were a popular dragonet at her school.

She is very quiet and soft spoken, and many of her clawmates forget that she even exists, which she is completely fine with. She isn’t a fighter at all, and will run away in terror during a battle. During her break, she usually sits in the darkest cave at Black Rock Academy, hiding from they eyes of the other students. She isn’t proud of herself, and wishes she was half of what her friends were. She enjoys reading scrolls, particularly poetry, as it calms her down and fill she her mind with happy thoughts.

Even though she is a seer, she hardly ever gets visions, most likely because there were clouds covering the full moon when she hatched. She is frustrated by this, and wishes her powers were as strong as the other moonborn NightWings. She has a very low grade in her seer class. She’s not very good at math either, hardly ever paying attention, daydreaming about scrolls and itching to white or doodle. Her teachers often snap at her to pay attention, but she doesn’t care. She always tries her best to stay out of trouble, but no matter how hard she tries, she always manages to displease her teachers somehow.

She is often inspired to write a poem by little things, but especially calm and peaceful things, such as a puddle rippling in the wind, or the steady rain in the rainforest. When she writes poetry, it’s almost as though her heart is coming up with the words, not her brain. Poetry is the only things that makes her happy, besides spending time with her friends and foster family. She loves her foster family, and out of any dragon in Pyrhhia, she is closest to them.

When Star and Nighthunter were in their eggs, their parents got demoted and were very low on gems. By the time Star and Nighthunter hatched, they could barely feed themselves, let alone feed their dragonets. Nighthunter was always weaker than Star, and he eventually died. Moonriser and Dark didn’t know what to do with Star, so they were abusive. When Star was four years old, they set her up for adoption. Star got adopted by two elderly SkyWings named Buzzard and Wind. They were much nicer than Star’s original parents, and they helped Star overcome some of her fears and horrible memories. When she’s turned six years old, they decided she was ready to attend Black Rock Academy. Being a new student at the Academy, Star was treated like an outsider for a long time. Feeling confused and hopeless, Star gave up on trying to fit in until she met Conch. Conch helped Star by introducing her to some dragonets named Kiwi, Bluebell, and Shadow. Kiwi and Bluebell were both kind to Star, but Shadow was rude and unwelcoming, immediately becoming Star’s enemy. Despite Shadow’s rudeness, Star became close friends with Kiwi and Bluebell, but especially Kiwi. Star admired Kiwi and was inspired to be more like her and less shy. When Star humiliated an animus NightWing-SkyWing hybrid named Firepit by rebuking her in from of the whole class, Firepit immediately wanted revenge. Star was terrified of Firepit and wished she had kept her mouth shut. Bluebell told Star that she was planning to confront Firepit, but Star begged her not to because she was scared that the hybrid would hurt her friend with her animus powers. Firepit eventually cast a spell on Star that would make everyone in the class hate her, but Bluebell cast a spell on Star to make her immune to Firepit’s animus magic. Star was shocked and angry that Bluebell hadn’t told her that she was an animus. Bluebell explained to her that her parents hated animus magic, and thought that any animi should be killed, and that was why she kept it a secret for so long. Star understood and promised that she wouldn’t tell anyone. Bluebell urged her to not even tell Conch or Kiwi, and Star swore that she wouldn’t.

Conch: Conch is Star’s close friend, and Star has always had a crush on him. He most likely feels the same way. Conch helped Star make more friends, and Star looks to him for comfort. Conch protects Star from any dragons that are teasing her, and is very loyal to her. Star is very thankful for this, and often tells him how happy she is to be his friend.

Kiwi: Kiwi is Star’s closest friend. When Kiwi inspired Star to be less nervous and shy, the two formed a close bond. Kiwi is always the first dragon she goes to if she’s bored. Kiwi makes Star laugh, and Star enjoys spending time with her. Kiwi was concerned about Star when Firepit wanted revenge, and tried to make peace with Firepit. Star was thankful that Kiwi was trying to stop Firepit, but she told her not to, as she didn’t want Firepit to use her animus powers on her friend.

Bluebell: Bluebell is Star’s third and final friend. Star sometimes thinks Bluebell is too enthusiastic, but still cares for her and doesn’t know what she’d do without her. Star was touched that Bluebell trusted her enough to tell her her dangerous secret: that she is an animus. Star feels sorry that Bluebell’s parents hate animus magic, and wishes Bluebell didn‘t have to always be terrified that her powers would be discovered. 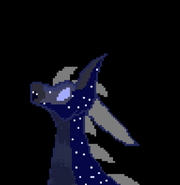 Star by Verglas
Add a photo to this gallery
Retrieved from "https://wingsoffirefanon.fandom.com/wiki/Star_(Tailbite)?oldid=1827211"
Community content is available under CC-BY-SA unless otherwise noted.