Slender, wiry, and kind of short, Spiritwatcher is an odd form of adorable grace. She has the body of a DeathWing, including the mask, with long spikes running along the base of her neck. She has a large sail on the ridge of her spine, winding down her tail, which has a fin as well.

Spiritwatcher’s scales are a light, glittering, blue-gray color, like her mother, with teal-colored membranes. Her underbelly is a light silver color, while her horns are a dark gray. Her mask is white, which is unlike her father’s, which is black, and royal patterns on her snout, barely visible underneath the mask. Her eyes are forest-green, with red tints within.

Spiritwatcher is curious and adventurous, exploring her home around the lake, much to her mother’s horror. Cerin is always watching his daughter, though, so she can't wander too far.

Hatched to Cerin and Princess Wolfdancer in a secret grove surrounding a lake, Spritwatcher was first told to be quiet and safe. She, being a young, newly hatched dragonet, longs to explore, and so she does, although her parents won't let her out of the grove for some strange reason. 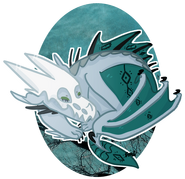 By the best noodle to exist !!
Add a photo to this gallery
Retrieved from "https://wingsoffirefanon.fandom.com/wiki/Spiritwatcher?oldid=1505245"
Community content is available under CC-BY-SA unless otherwise noted.