slushie is my alt sona and while he doesn't accurately describe me entirely, he's still displays a part of me and is therefore important to me. please don't steal / edit / use anything on this page without my permission first, please. unless it is to add needed categories.

Throughout the years, never has one seen such a being, a combination of three tribes, not just two. Which seems to be rather rare these days, in fact, hybrids in general haven't been increasing too much. Nevertheless, he doesn't live an incredibly interesting life, but he does have books. After obtaining a job at the public library of Sanctuary, in which he places books back on their proper shelves. Slushie can't help but have fun while he's at it, after wandering around the library for hours on end, he knows every inch of the library. Which tends to help him when happily assisting others... perhaps "assisting" is a very bold term used for him. Rather he kinda just awkwardly leads them to where they want to go and if they get sidetracked, he leaves them where they are.

They don't even seem to mind being left behind. It seems that's all there is to his life, growing up in a town called Sanctuary, known for the scavenger zoo at its heart.

Pointed rows of purple tinted sky blue run down his body, across his face and through his friendly smile. A tribrid, child of three different tribes, IceWings, NightWings and RainWings.

Like sky blue glass, shimmering in radiant rows of sharp scales, blue raspberry it seems in color to ripple across his body, Slushie is hard to not notice for the eye simply swivels in his direction. An obvious tribrid, with more distinctive relations towards NightWings and IceWings while his RainWing blood is see via the bright colors upon his scales. Cool colors ripple in soft hues across his body, the mainscales seeming to remain a cold sky blue with the effect of clouds as if mist running across them here and there.

Atop, an icy white, like blades they almost seem to slice their way into the picture, teardrop scales stud the middle row, near the tips of each spine, a vibrant dragonfly blue as though mercury and in following a crest of spines, starting near to top of his head and slowly curving downward towards the tail. You may notice him in and around the library of Possibility, assisting anyone in need of finding a certain book. There are strange appearances in Slushie's spine crest running down his back, starting is a fine sunset red and slowly rippling into a orange, as if a rainbow sits on top of him, soft pastel colorations that is.

A build short and stocky with slender, nimble legs, he's not very tall for his age, more he's all squashed together chubby near the legs and underneath with a short, kindly curved snout and cheerful green-blue eyes that, unusually, are surprisingly large. It's behind his head that two sky blue horns fading at the tips to a cool pastel green which seem to have silver dust specking the tips as though stars in a drowning sunset of beautifully swirled cool colors. Wings might catch your attention at the least, the membranes whorling with deep purplish-blues, violets and indigoes near the tips, slightly highlighting the areas and in turn clusters of stars scatter throughout the membranes which form no sort of pattern for it seems they even move.

Nearing the ending of his tail, needle sharp spines stud either side of his tail, remaining a nice shade of pastel blue with tips of a navy so fine, they seem as though the night sky itself dripped onto the tips and hardened. While that of the spinal crest spines stop when nearing the tip, now finally fading into a course indigo in itself. Slushie is quite a strange figure, enthusiastic, yet he holds compassion within his walls and quite an eye-catching appearance indeed. May I mention, while nearing the end, the tribrid's legs have seemed to remain a glittery yet dark frosting blue with, at the edges of each scales, has a fading pastel pink to it, this effect travels up the wings as well and in nearing each branching tip, seems to slightly fade into a lighter hue.

A bouncy, cheerful dragonet, perhaps more on the RainWing side.

Slushie can only be described as an overly positive dragonet with a habit to crack bad jokes to his friends. Yet you can see him stalking the shelves of Sanctuary's public library, placing books back on their shelves. For he can be reclusive when he wants to. Although he's usually prone to humming songs he loves out loud, or just plain singing at any given moment (usually when he's working). Most tend to avoid him, perhaps due to his tendencies to have a dark sense of humor and additionally incredibly weird. Not to the point that no one underst 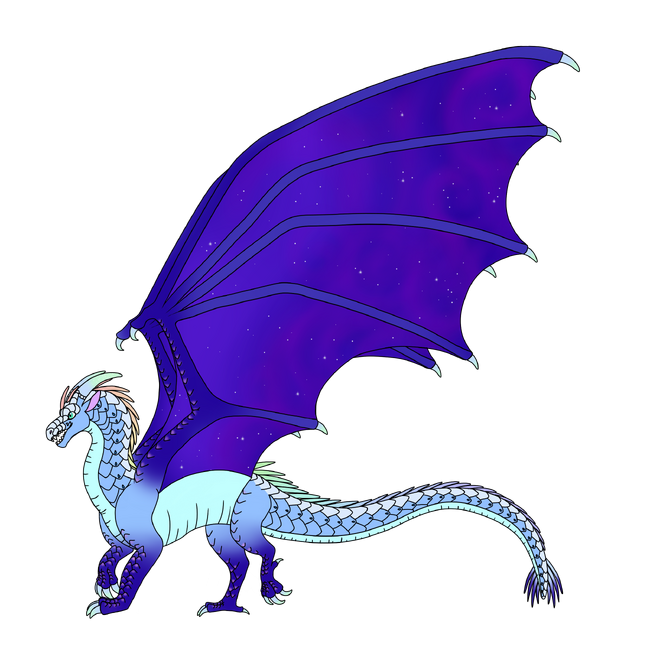 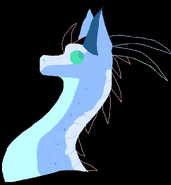 Sunset, thank you so much, he looks so adorable and fluffy!! 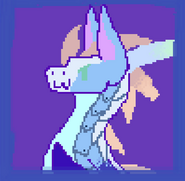 Add a photo to this gallery
Reference by Marx, thank you so much, I love it!!

feel free to add / yeet your sona or alt into Slushie's relationships, however this is only if we've talked long enough and had a good conversation

Sincerely, Slushie loves talking with Iceberry and finds her quite agreeable and fun, especially because they're both in the same house, Hufflepuff! He finds himself getting along with her quite easily and he really likes her creative ideas, although they haven't talked in awhile, their relationship is, in general, positive. Slushie would definitely like to get to know her better in the near future, but for now, he'd just like to appreciate her presence and love for Harry Potter too. The tribrid likes talking to her and finds her pretty nice, sometimes he likes visiting her character pages and read about them, since he finds it fascinating how she comes up with such creative ideas for them all. He'd consider her a good friend of his, although he hopes to forge more of a better friendship with Iceberry soon.

There's not much else to say about their relationship, other than the fact that the hybrid is a cool friend, he wants more opinion on her through conversing. Hopefully they'll get to know each other better in the future, who knows, but she definitely seems like someone he'd love to hang out with more often. I mean, he's just started talking with her about six or so months ago and hopes to stay in contact with her. Perhaps they'll both find another common interest soon, Slushie's just glad she considers him a good friend too and hopefully it'll stay that way. Altogether, Iceberry is a good friend and he likes talking with her about Harry Potter and other books in that genre and he would love to get to know her a bit better in the near future because she's really cool and creative.

Retrieved from "https://wingsoffirefanon.fandom.com/wiki/Slushie?oldid=2171411"
Community content is available under CC-BY-SA unless otherwise noted.