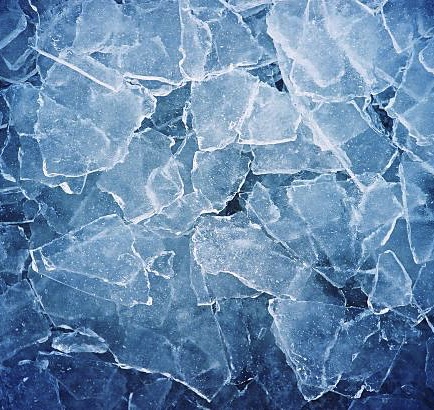 Many think her name almost fits her appearance perfectly, although Ice herself can barely see a connection. Shattered Ice isn't a bad reflection of her looks, with her irregular blue scales and silver-tipped wings, but it gives off the impression that she is broken, fragile, weak- and yet Ice is far from that.

Ice is strong despite her slim, almost fragile-looking frame, as though toughened overnight. Her scales are fairly smooth but hard. Shattered Ice has jagged, more square-like, irregularly-shaped scales, like the ice shards she was named for. Each is dark blue, silvery-white at the tips, fading into a brighter, slightly paler blue near the root, and can appear glassy under certain lights. Ice's underscales are practically non-existent, being a smoother, paler blue.

Perhaps the most impressive aspect of her appearance would be her wings. Ice's wings are large and almost majestic-looking, her convert feathers being a subtle gradient from bright blue to dark blue, and her flight feathers blue-black tipped with silver. She has a feathered crest, a gradient like her convert feathers.

SI has bright silver eyes, which seem to startle many when they look at her from talons upward. Indeed, one would have almost certainly expected them to be blue- like her sister's, and like the rest of her body. Although her eyes are silver, she has electric blue transitional scales, which glow almost white when she purposefully summons her power.

She wears a small kyanite pendant in the shape of an ice shard; this is surrounded by a small, ornately carved silver dragon that winds around it and is hung around her neck by a silver-infused cord, matching her sister's. This was found by her and Tall Shadow when they were young dragonets, probably dropped from a travelling merchant. Ice owns a dagger, which she named Shard. It has a blue handle and was stolen, along with Tall Shadow's matching one (Umbra), from a shop a year ago.

Personality snappish and grumpy, kind only around her closest friends. tends to ignore other dragons generally unless she is talked to, always fidgeting/looking for ways to escape. gets very panicky in bad situations.

her abilities are very spontaneous but powerful, and burst out strongly when she is mad or panicking especially, which makes her more mad/panicky. normally, just by touching someone her electricity dribbles out, which is why she ignores others. basically just pretty uncontrolled and cant really do anything useful with her abilities.

SI was born alongside her sister, TS. TS hatched first, taking a total of three minutes struggling out of the egg, before Ice pushed her sister out. TS hatched at the beginning of the storm, while Ice hatched during a wilder, more angry period. They'd hatched from the same egg, but since they were the first generation of sparks, they didn't have too strong a magnetic connection.

Just how powerful Ice's spark abilities became apparent when she was just four months old. There had been a suspected robbery near where Ice and Shadow lived, and the suspect was getting very violent and began hammering on the walls and swearing loudly. Ice began crying loudly, and when Snow Feather came to comfort her, she temporarily stunned her mother for a few seconds with her electricity. Snow, who had been raised outside the TempestWing kingdom from when she was little, wanted nothing to do with the TempestWing tribe and only came back because her husband wished her to; and a spark dragonet would be the very thing that would tie her to her tribe.

Retrieved from "https://wingsoffirefanon.fandom.com/wiki/Shattered_Ice?oldid=2094851"
Community content is available under CC-BY-SA unless otherwise noted.