To find a new home

The NightWing Island,(Formerly), none currently

Shadow belongs to Q.Bluefire, steal her if you dare! (She will bit you if you try. Hard)

Shadow has dark purple main scales, a lighter purple secondary scales, and a black back line.Her wing membranes are a purple so dark it looks black. She has long, white horns, and ivory spikes and claws. Her underbelly is purple tinged white.

Her claws are white, and her eyes are a deep purple.

Shadowseer's 'stars' on her wings are in clusters. They have a silver tinge to them. She has a nick in her left wing, just below the first 'finger'.

Very loud. Shadower has a outgoing, determined personality. She has very strong opinions, and won't take 'no' as an answer. She is rebellious, strong-willed, and brave. Shadow will fiercely defend her friends, and attack her foes with alarming enthusiasm.

Shadow doesn't think before she does something, and often lands herself in trouble. Some dragons think of her as rude, often because she tells everyone she meets her opinion, regardless whether they want to her it or not.

Being an author is her dream, and she's already written a few short stories, including The Everlasting Tree, and A Twisted Path. Shadow is often scorned for her writing, and never shows it to anyone.

Shadowseer has no NightWing powers. She can breath fire, like all of her tribe, and is a good flyer with strong wings.

Shadowseer was born to Joy and Arrogance. Arrogance wanted a son, and was heavily disappointed with her. Joy was always really busy, and simply didn't have the time to look after her dragonet properly.

At the time, The NightWing's home, the volcano, had not erupted yet, and so there was still plenty of prey, forests, and clean water.

Shadow's family is huge. She is descended from a cousin of Listener's.

Her father. A grumpy, cold dragon.

" How dare you! You son of a sea slug! You flame-snorting behind of a cow!" - to Buzzard

"Well, what else would I eat? Grass?" 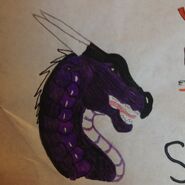 Her headshot by me

Shadower. Line art by BFD
Add a photo to this gallery
Retrieved from "https://wingsoffirefanon.fandom.com/wiki/Shadowseer?oldid=1775568"
Community content is available under CC-BY-SA unless otherwise noted.