Sandhunter belongs to Queen Bluefire. Steal at your peril.

Adopted as an egg by Queen Bluefire

His lack of Adventure

To stay out of trouble

Sandy (which he hates)

Sand up his nose, persimmons

Normal SandWing abilities, except he has to eat and drink regularly

A weapon? Him? You're kiddn'

Sandhunter has mostly brown ochre main scales, with a lighter line of scales touching his underbelly. His horns,underbelly, crest, tail barb and little ridges on his NightWing scales are a pale golden brown. His back fin is jagged, unlike a normal SandWing's, which is smooth. The back fin is a beautiful gold ochre. Sandhunter has twinkling toffee coloured eyes, and a light pink tongue.

Sandhunter has mostly a SandWing build, but with slightly smaller wings, and a smoother head.It's not hard to single him out from a group of SandWings. The most obvious thing is that he is too brown to be a pure SandWing. The NightWing scales also show that he is no SandWing. Sandhunter also has black blotchy marks on the edges of his wing membranes that look like ink splatters.

He loves making jewellery, and always wears a pair of black sky fire horn clasps that he made, and a gold earring in the shape of a snake eating its tail.

Easy-going. He is kind, law-abiding, generous, and mostly quiet. Wip

Sandhunter has no NightWing powers, although he has a uncanny knack at guessing other dragon's thoughts.

Sandhunter has some NightWing family, but he hasn't meet them.

His grandmother. A stiff,arrogant dragon who is furious that her daughter dared to stain the family line with SandWing blood. She has disowned him and his mother as any relation to her.

" I guess it's a funny name. But I don't really care."- When teased about his name.

"An adventure? Nah, I'd prefer to read." 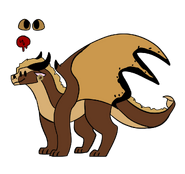 Add a photo to this gallery
Retrieved from "https://wingsoffirefanon.fandom.com/wiki/Sandhunter?oldid=2114652"
Community content is available under CC-BY-SA unless otherwise noted.