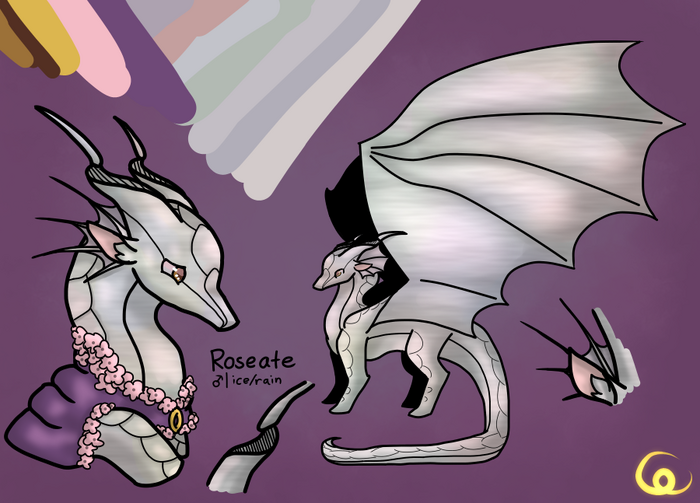 Belongs to Cloud, Sby and Wild! Do not touch, please and thank you.

Ice/RainWing that breaks the stereotypes :D

Roseate, the mix of Ice and Rain, but the one that didn't turn out quite right.

The first image associated with an Ice/Rain hybrid is that of a pristine dragon, decorated with iridescent white scales. It's the tale of perfection, the sight one would expect to see - and why searching eyes might pass directly over Roseate.

The dragon isn't slim in perfect, but disproportionate. He's stockily built, but with far too long of a tail, left dragging on the ground. His wings are too big, not in the grace of SkyWings but simply awkward, an aura that spreads everywhere for him. Odd, long, twisted horns, that get caught in everything. Short, stumbling legs. And a frill, with the webbing spread so sparsely it might as well not exist at all.

His scales, if not perfect and pretty, are at least unique. It's as if one tossed him in a mixture of paint - reds and purples and greens and browns thrown around without much thought. The pigments move on their own accord - always a mash of color that reflects neither emotion or a sense of control. Yet all these bright colors are drowned afterward with a layer of gray, like viewing them behind clouded, thick glass. The only hint of pure, pretty color would be in his eyes, which choose to be a brilliant, warm brown.

In terms of accessories, Roseate doesn't do much either, he tends more towards pastels, bright colors that attempt to hide the mess of his scales. He tends towards softer cloaks, and the limited cloth flower, resting along his shoulders.

You’ve heard the story: the Ice/Rain that was abandoned, or ignored, or hated, or lost both their parents, the dragon that rose up despite their horrible beginnings to become a wonderful figure. Roseate is the dragon that breaks that mould.

He grew up with two living, loving parents, that cared for him. They taught him how to be a good IceWing, because of where he lived. Just because he was half RainWing, didn’t mean he’d fall into their habits. No one ran away, no one died. Both parents helped him learn to hunt, fight and get by.

He didn’t really have any friends at first, but eventually he befriended a kind dragonet named Chill. Chill was a lot like him. In the background, quiet. They were reasonably close in-school, but that was as tight as their friendship got, as he never actually met up with Chill outside of school. Still, they worked on projects together, ate lunch together, and enjoyed each other’s company greatly.

Much like his fellow students, there were some teachers he loved, some he hated, and others he didn’t mind. He enjoyed learning history, although it was mainly taught to paint IceWings as the greatest tribe, and all the others as lesser. What he really wanted to learn about was RainWing history, as his mother never really told him much about herr tribe. Instead, it spoke about the evils of NightWings and how lazy RainWings were, which annoyed him. He wasn’t lazy! His mother wasn’t lazy!

Still, he enjoyed school. It was fun enough, inaccurate as it was. Roseate wasn't an athlete, or an artist, or a star student. He wasn't the teachers' favourite, not ever, but they liked him. His grades were at a steady B. Occasionally he'd get an A, marked with surprise and happiness from him and his parents, or a C, which was marked with annoyance and a lecture about how school was very important.

cloud
Add a photo to this gallery
Retrieved from "https://wingsoffirefanon.fandom.com/wiki/Roseate?oldid=2423248"
Community content is available under CC-BY-SA unless otherwise noted.