This Oc belongs to Gran

Please do not edit or steal for rps and fanfics without permission.

Out in the deadlands, you could hear a voice echoing across the cliff faces. Out beyond where the dragons cluster, flys Rhodonite in the most dangerous tricks ever.

Rhodonite has taken up much of her father's appearance. Ranging from his sharper features to even the genetic mutation that tints both of their eyes violet.

With that said, She's a tall and wiry dragonet. Built for aviation, not so much fights. Long wings extending up from her shoulders and reaching a normal length for SkyWing standards. Running on the blades between the vast wings is a very roughed up, feathery SandWing sail; Many chunks splitting apart from the original piece due to the actions of Rhodonite herself. Many would say that a SandWing hybrid would have a barbed tail, Right? Rhodes got the short end of the stick and gotten the thicker tail, agile and strong to help maneuver through the air. All of her claws are immensely curved, great for climbing, I guess.

Rhodonite has a face like a box. Longer stronger snout with a square jaw to meet it. Leading down her snout is her sharp jawline. SandWings and Skywings both have features that dilute the jaw. Rhodonite had neither. It's all just a sharp line. Spouting from her head are horns, dark and warped. The only other piece of jettison piece of bone is the curved spike on her snout.

When she first hatched, she was a bronze-brown color. But as she grew older her main sets of scales lighten up into a orangey yellow. But not every bit of her lighten up. Splitter scales, her sail, her horns, even when her scales lighten up came inky spotting (next paragraph). All of these remain as the darker, brownish features like they were first coming out of the shell.

From her eyes to the end of her tail, Rhodonite has inky Orveo spotting that gives her the name of rhodonite. Like what was said, it has an inky feel as it weaves between scales. From the ends of the skin and spreading inwards are loosely large diamonds that flake off and unravel themselves.

On a day-to-day basis, there's ever only one thing you'll see consistently. A silver nose ring around the left nostril. It shines brightly, and maybe into someone's eye.

Thrill-seeking. Recklessness. Rebellion. What else is there to say except that she's a normal teen that wants more.

Upon first being introduced to her, you'd notice that she's a talker. She replies to everything. She talks with everyone. Everyone seems to either enjoy or tolerate her conversations. And that's because of how observant and charismatic she truly is. She can tell what you like by having a few lines of dialogue. Rhodes was always a charmer and skilled with charasmia. Some may say there's something off about her noticing a lot of a dragon, or maybe even a little manipulative. But as always when anyone brings it up, she jumps on the fence saying otherwise.

From the moment it click in her head that she can both run and fly to gain speed,she has been anything but careful and incontrol. Ask her not to do something? Well you gave her a idea and she goes and does exactly that. Try reverse psychology? Too late, she does what you told her to do. She is notorious for actions like that, and more importantly, getting into extreme trouble with many dragons. At the end of the day, she'll get herself into any mess for the simple words of:"It will be fun."

Building and learning on the spot is her thing. She always loved putting things together and sometimes taking them apart to build something better. She likes challenges, something that can test her observation skills. But more importantly, she likes the threat of damaging failure.

She's a fairly stickly dragonet compared to other SkyWing dragonets. SkyWings are known for being great fighters, but Rhodes refuses to fight due to the fact that she will never survive the encounter. But instead of strength, she has agility and speed. Due to her build, she is much better at maneuvering and gaining speed. But she can do something. She has gained muscle due to her liking to tinker with metal and creating something out of it.

How is it that hard not to fail language arts? One could ask. According to Rhodonite that class is pointless. We can all read, so why teach us words that dragonets our age already know? Her best suites are Math (Even though she'd admit it's kinda hard) Science and History. She never did well in reading and writing for it bored her compared to others.

It's obvious, she's SkyWing dominant. A better respiratory system, built up for moving and exercising. More of a capability to breath fire for the longest time. All that great stuff that comes from a SkyWing. But now what about the SandWing side? Only three things. Last longer without food or water, heat resistance, and heat radiating off her scales.

In a room, two heated SandWing bodies looked down. In a basket of linen, a bronzed-orange egg hatched with a dragon somewhat the very tone came out.

Gemsbok knew this was bad. She just had to be a little selfish and got with that rugged SkyWing. But looking down at the sprawling dragonet, that looked entirely SkyWing; not to mention the looks Bronzite was giving it. He was bound to find out a week of it's existence.

But yet he didn't.

Surely a dragon would reject a dragonet that clearly wasn't his. But Bronzite never wanted dragonets, yet he did warm up to his supposive daughter. It was a miracle on the side of Gemsbok, finally they could have the dragonet she always wanted for the two of them. Surely a few secrets could be held up for ages, maybe even to the grave.

But from her hatching to the modern day, nothing really happened that is awinspering. Sure she did have a small phase where she ate nothing but yellow foods. Or all the various incidents where Bronzite had to watch her. In fact that was the most of it. Bronzite and Rhodes had an interesting dynamic, Bronzite loved seeing Rhodonite smile and Rhodey was having fun getting into trouble. This was undoubtedly feeding her recklessness, and with this fun growing with her father she started resented the strictness of her mom.

Something did happen. It was a slip of the tongue on Gemsbok's part. This was only a year ago but this single moment rocked Rhodonite. It was another argument between the two very different minds of Gemsbok and Rhodonite. Rhodonite was doing the same old same old, talking with a few other dragonets into venturing again into the Great Five-Tail river Canyon. She came home, leaving the other two on their ways. How it started was in a flash, but the words came out slowly.

"I'd wished I had never found that SkyWing, I was better off finding someone more tamed if his dragonets came out like this!"

Rhodonite slowly turned to face her mother. Eyes narrowing. She wanted to speak, she really wanted to. But what her mother said was not just regretting her creation, but saying that she cheated on a SkyWing to risk a hybrid for no apparent reason. With this sudden reveal, she had to leave this lot. She ran out and flown out far into the desert to live with her thoughts. But later when the moons were at their height, she had to return home. 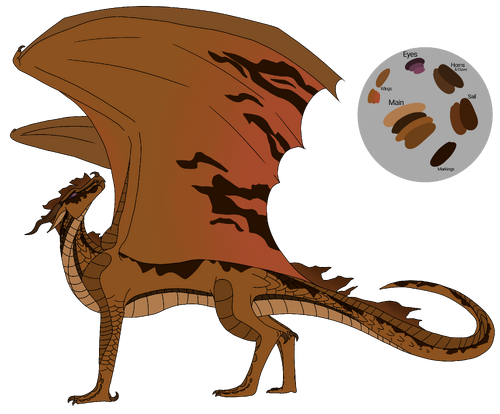 By Animal
Add a photo to this gallery

Retrieved from "https://wingsoffirefanon.fandom.com/wiki/Rhodonite?oldid=2188388"
Community content is available under CC-BY-SA unless otherwise noted.