I've adopted her, and plan to add to the page/revamp it a bit. (Proof)

Queen Fern is a tall, and elegant, Leafwing. Royal blood not only flows through her, but it can clearly be seen by the way she acts around her subjects, and her stance. Her scales are the color of newly sprouted canopy leaves, and turn another shade of green around every other scale. A lighter green, almost a lime. Her eyes are the color of a spruce trees bark. A beautiful shade of brown. They usually glow with pride, she was very proud of what she got to call ‘her tribe’. Her horns are elongated; around half the size of the average Leafwing should have. They almost curve into a ‘loop’ at the end. The fins that run along the back of her neck all the way to around the middle of her tail’s membranes are a spruce brown, much like her eyes. Finally, her wing membranes are the same spruce brown as her eyes, aswell. They look like the last dead leaf that would fall from a large oak as winter began. The same goes for the leaf-like fin on the end of her tail. She bears no special jewelry, unlike most queens. The only thing she ever wears on occasion is a small ribbon tied right around the base of the leaf-like fin on the end of her tail. Despite that she has a few scars on her stomach from her years on the street.

Queen Fern seems to be the perfect leader in her subjects eyes. But, indeed, she does have her own flaws. Her subjects love her for her kindness and generosity. She loves to help the poor and needy. She even takes from the rich to give to the poor. Yet, if you cause her harm, physically or even mentally, she will crush you like a bug. She'll ruin your life, your name, and take everything you own. It's best to not bet her to do something; especially telling her she can't do it. If you say she can't, she will.

Rumoured to be the only living Leafwing animus, but she was never proven to have it before she was killed in her sleep when HiveWing guards murdered her guards, and then murdered her.

Fern, as a princess, was an outcast to her family name. As a child she was never sophisticated or had any manors. She'd play horrible pranks on her mother, father, sister, and brothers. Because of this, her mother held a deep hatred for Fern. She was demoted from a princess, forced out onto the streets by guards and never let back into the Leafwing palace. She lived as an outcast until her sister, Alder, won a duel against her mother for the throne. When she heard the news, she strolled up to the castle to duel her sister for the throne. Even though she had only been queen for a mere day, Alder accepted this challenge. Yet, because of her years and years on the street, Fern overpowered her. Fern became queen, until the fateful day her whole family and all leafwings were wiped off the face of Pantala.

King Poison Ivy - Her husband. (Around 37 Years at death) 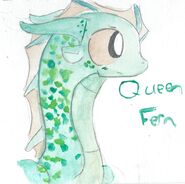 By Feather!!! Its adorable!!

Ref by me!!~ (Fawn)
Add a photo to this gallery

Retrieved from "https://wingsoffirefanon.fandom.com/wiki/Queen_Fern_(Lacey)?oldid=2134794"
Community content is available under CC-BY-SA unless otherwise noted.