And What If I Can't? What If I'm Not Worthy Of Her Ideals?

Protagonist of The Black Silk.

Viceroy has orange scales with black as well as scars and blood everywhere.

Her scars allow her not to walk well in certain circumstances.

Viceroy is usually kind, but is discriminated by most SilkWings for her distinct black color. As a dragonet, she was attacked, causing her depression. She still bears a scar from her mother, Ex-Queen Silverwashed, and a couple really bad scars.

Viceroy hatched as the princess and daughter of Ex-Queen Silverwashed (currently queen at the time) and Queen Atlas.

Many thought she was prophesied to bring disaster (similar to Deirdre from Deirdre of the Sorrows, not referencing Pokeball's OC). Some didn't, so Silverwashed tried to kill her but was caught by Atlas.

She didn't live a normal life. Everyday, Silverwashed tried to kill her. She then sent Viceroy to Jade Mountain Academy, but then went missing, so Atlas took the throne after a few weeks.

Silverwashed was angry and both tried to kill Atlas and Viceroy.

Kite: Can't fly... hates his mother... just like her, except about the flying part. 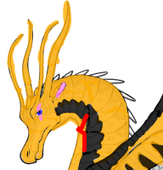 Old infobox picture by Pokeball (base by Joy Ang) 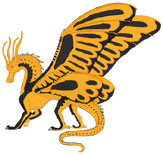 Viceroy fullbody without scars (base by Joy Ang) 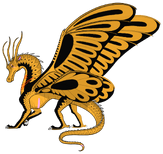 by moonmoon!
Add a photo to this gallery
Retrieved from "https://wingsoffirefanon.fandom.com/wiki/Princess_Viceroy?oldid=2076682"
Community content is available under CC-BY-SA unless otherwise noted.