Princess Abalone is created by SeaWing1983 (aka Candy Bagels). Please do not use without my permission- she is my main OC. Coding by Flare.

Description
Princess Abalone is a female animus SeaWing who lives in the Kingdom of the Sea. Her body build is average, and along her ridge and underbelly, she has the average spines and webbing, except a little longer. She has the royal sewing pattern on the underside of her wings. She has mostly the same pattern of her twin brother, Prince Ninegills except the colors are slightly different. She has an under belly with a mother-of-pearl coloring, her main scales are a light blue with ocean blue accents on her horns, gills, webbing and wing membranes. She has nine gills instead of eight like her brother and her eyes are a blue-green hazel color. Abalone always wears a diamond shaped tanzanite necklace on a silver chain to symbolize her relation to SeaWing royalty. She also has other pearl necklaces and small abalone earrings shaped like a small dove. The only thing she wears going into battle is her tanzanite necklace. She also wears a small belt with small pouches for different herbs and medicines for healing whenever she travels although, she doesn't wear it frequently.
Back Story
Princess Abalone was born at the same time as her twin brother, Prince Ninegills, on a night with two full moons, the largest and the smallest. She wanted to serve her mother and tribe so she joined the forces. She served in the army for most of her life and is a very good fighter since she trained since her childhood. She was never really interested in love, so she usually spends her days training and studying. She is very good in school and enjoys science, and english. She loves parrots and therefore, visits the Rainforest Kingdom very frequently. She also goes there to visit her brother's mate and dragonets. She is also a very good healer, and was taught the ways of healing of all seven dragon tribes. Now she is constantly helping her tribe with charity work and volunteering.
Allies

He is her twin brother and best friend. They have a good brother-sister relationship and will help each other at any cost.

They met through Ninegills and she had a few conflicts with the SkyWing-Skylar because of their position in battle, but eventually grew to like her. She became quick friends with Shadowrunner and his dragonet, Comet. She grew to like Comet and helped train her in the ways of healing and fighting.

They are part of Ninegills family and Abalone became great friends with them. She visits occasionally and studies the parrots there with the help of Parakeet. 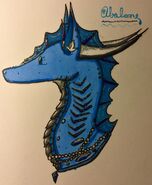 By The Happy Dragon!

Abalone's ref. sheet by me

Abalone by the amazing SkaiaGalaxy/crystallinedragons! Check them out on Deviant Art!
Add a photo to this gallery
Retrieved from "https://wingsoffirefanon.fandom.com/wiki/Princess_Abalone?oldid=2082681"
Community content is available under CC-BY-SA unless otherwise noted.