this character is a sponsor for project divinity, and belongs to fear, do not tamper with this page; also the info written will only be written this way temporarily. ill fix it later on 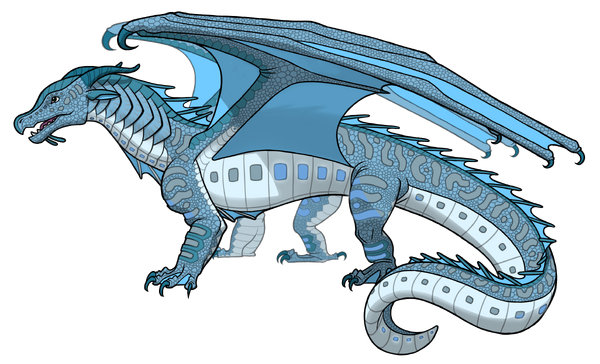 prince atlantic has a resemblance to his ancestor, Prince Albatross, when it comes to appearances. however, he is not an animus seawing.

atlantic is slimmer, sleeker in comparison to most seawings. his snout is blunter, and shorter than average, but nobody really pays attention much. the curved horns of his are curved more than usual, and are subtly asymmetrical. his arms and legs are a little longer than average, with his tail being thinner and longer too. he has gills on both the sides of his neck and on the sides of his underbelly.

("His scales were bluish-gray, but so pale in some places that they looked almost white, while his eyes were described to be hooded and a color blue so dark they appeared black." regarding albatross)

atlantic's colors consist of primarily pale blues and deep teals alike. base scale color is often associated as a grey-pale blue color. top scales are a teal or slightly darker hue. underbelly is very pale, almost white. gills are dipped/tipped with misty grey stripes. speaking of stripes, photophores are initially presented as misty grey without their glow, but they glow a soft periwinkle instead. has the royal designs on wings. horns are a deep teal, as are his talons. teeth are a pale grey. eyes are such a deep green they could be black. webbing is more of a lighter blue with more transparency. wings are larger and have a similar color scheme to webbings

despite being subtly pressured into the role of a prince, hes rather carefree and does what he chooses to do instead of what he's demanded/commanded/told to do. he's a closeted non-binary prince, feeling as if he could handle either role in the royalty ranks if he were given a chance to fight for the throne. can be brave, but doesnt see a need to do so. rather intelligent. nerdy, as others say when he has his snout in scrolls and books of all kinds. he gets anxious over the possible results of things, and is rather cautious. hes incredibly loyal to his works and projects. he finds it difficult to really bond with others on an intimate or Very Emotional Level. when put in situations that could trigger such, he gets very squeamish. hes also genuinely afraid of drowning despite being a purebred seawing.

regarding the other heirs and royals

the byproduct of a fling between a queen and a commoner

summarized: a dragonet which showed significant promise and progress in studies. was a dragonet hatched from a fling. raised by father, was forcibly silenced and told to keep his royal lineage secret. as he showed significant signs of intelligence, he ran for positions higher up in the rankings. soon, he met his mother (the current queen). queen takes him under her wing in regards to furthering knowledge, taking him on trips as an advisor and bodyguard, forced into being treated and acting like a prince despite his closeted decision. upon making a big decision to abandon the sea kingdom after having learned/had enough, he runs to the opposite side of the continent, running into [character; likely moonstruck or vienna] where hes offered a job at divinity. after hearing about the project, he sets aside a good Hunk of money to medical achievements and goals towards research in the project for the seawing duo, as well as parts for the skywing and nightwing duos. is currently raising and helping meduso figure things out and testing his purpose while studying everyone/thing else.

Retrieved from "https://wingsoffirefanon.fandom.com/wiki/Prince_Atlantic?oldid=2403563"
Community content is available under CC-BY-SA unless otherwise noted.