This OC is owned by Pom and can be used with permission from her.

Polar-Bear is an IceWing who attends Jade Mountain in the Gold Winglet. Before he attended Jade Mountain, he lived in the Ice Kingdom, close-ish to the aristocrat villages. He would see the aristocrats constantly trying to get up the "rankings" and be arrogant and snooty. He hated that, and wanted to be nothing like them. He gradually slept and lived farther and farther away from his house and the villages, and once even ran into Fractal while she was exploring.

Polar-Bear tries to be as humble as possible, but can't avoid appreciating priase. He hates stuck-up dragons and especially IceWing aristocrats. He tries to be as useful as possible and dislikes when he can't be. He likes when dragons help each other and when conflict is solved. He also kind of likes when stuck-up dragons get verbally BURNED. When faced with fight-or-filght, he usually chooses fight as his reflex. When he hears others in conversation near him, he instictively listens. He can be a bit gullible, however.

Polar-Bear is tall and regal. His icicle horns and back spines are smaller than average, and can almost appear like fur at times, almost. He is mostly white with some light blue scales scattered around his body, and even lighter blue wing membranes.

Winter: He hates Winter. Polar wishes that he didn't like scavengers so he could eat them all.

Pond: Bear is friends with Pond, he finds it refreshing to see a royal who isn't 100% full of themselves.

A typical IceWing by Joy Ang 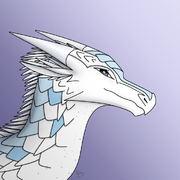 By Star-Dragon on the canon wiki! He is so handsome and beautiful! I love him!
Add a photo to this gallery
Retrieved from "https://wingsoffirefanon.fandom.com/wiki/Polar-Bear?oldid=1182809"
Community content is available under CC-BY-SA unless otherwise noted.