Pizza is my sona. Edit without permission, and I can and will splash tea on your clothes.

Hey there, Moon here. Meme has left us and left Pizza in my care. This character will become a memorial for them.

Thank you. For everything.

I'll be here, waiting for your return.

The flickering of her computer screen reflects off of it's pink shades while darkness eats at her room. You hear the crunching of doritos in the shadows while the gulping of soda fills your ears. Carefully, you reach towards the light switch, trying not to disturb them. As you flick on the yellow tinted lights, Pizza hurriedly turns their head towards you, revealing their looks.

They appear to be a short dragon, with the body structure of a SkyWing but with the horns and tail of a MudWing. Their scales are bright yellow like the sun, mixed in with several shades of gold and white-yellow. Pizza wears massive pink shades, hiding their moss coloured eyes. Red markings shaped like circles dot their scales, which is similar to their dark red underbelly. Their claws are curved like crescents, which their gray horns are of the same shape.

To some dragons, Pizza appears to be a creepy introvert who prefers to be alone. And, well, they're completely right if you consider it.

Pizza is an introvert, which means he prefers to stay by himself and stay indoors instead of going outside. He loves interacting with other dragons, sure, but the bad thing is that he can't talk to others without considering his life choices every second or getting nervous as he mutters and stammers. But, if you're his friend, Pizza is extremely sweet and enjoys others' company, if it wasn't for his nonexistent confidence in what he's does or how sensitive he is. He is also quite stupid in a way, whether it be forgetting what something is or how to solve math problems.

The most unknown thing about them is her trust issues. Pizza has a hard trusting others, which usually results in her pushing away dragons who could've been her potential friends. She dislikes how lonely they can be, despite doing it to herself. Sometimes, Pizza could be laying in her bed, thinking about how everything is her fault and no one would care if she were gone. The only thing she can do is put a smile on their face, shielding her true emotions so they don't get discovered by her friends, which Pizza is scared of them finding out because she constantly worries that it'll bring them down.

Pizza is also a hopelessly incompetent dragon. Whether it be hoping for something more or rambling about stupid stuff such as happiness, they always seem to be talking. They feel no emotion towards things such as death due to being used to it by now, and only grieves when necessary. They rarely talk about what they feel like, giving off the feeling that they're cold and emotionless, which differs from time to time. They are often compared to Nagito Komaeda by her friends, and doesn't mind one bit, because even Pizza admits that they are similar.

And then, there's Pizza's sense of humour. He always seem to be joking around and never take anything seriously, and when you're around him after he looked at the newest meme, beware.

Pizza was born in Possibility, which was full of thieves, assassins and crooks. Their parents soon moved away and into Sanctuary, the best option at the time.

For one, Pizza was always curious. They always had their nose buried in dirt looking for "buried treasure" or was looking for adventure. Their mind would always wonder in class, and they would never pay attention to the griping of their teachers.

And that's when they began to draw and write.

Pizza never liked drawing at first. They just drew stick figures when necessary, whether it be a letter to their parents or something for a holiday. But, after a while, Pizza began to draw more seriously. The many things they were good at drawing wise was sketching dragons.

For their writing, Pizza had always been good at that. They made sure to check their grammar and look over their spelling mistakes. They were soon noticed for their writing and praised, though Pizza never thought of themself being good at anything.

Meeting a few toxic friends who ruined their life, there was one IceWing named Jay. Pizza met him after shopping for pastries in a shop near to their home. The conversation started when they bumped into Jay, but no matter how much times they apologized, Jay didn't seem to accept it, but soon did.

The two began talking for a while, and Pizza soon began letting her guard down and let this dragon into her life. After leaving, they promised to stay in touch with Jay, which they did by sending each other notes.

Soon the two finally met up once again. Then again. Then until they were visiting each other everyday.

Relationships are open, but sonas only. Though, if you're a close friend of mine, you can ask for a non-sona character to be in Pizza's relations, but only two.

Pizza thinks that Balach is very fancy. They hope to meet her again, but Pizza doesn't expect to. (Neutral)

Pizza loves Cloud! She liked his somewhat introverted personality at the beginning, though she believes that he can stop judging dragons quickly. She doesn't mind him imitating her behaviour or that of other dragons, and would never dare to copy him. She wishes he can just be happy for once and stop being so self conscious of himself.

And then, there's Cloud's somewhat manipulative behaviour. She dislikes how passive aggressive he can be when arguing and wishes he could accept that he is in the wrong. Though, she relates to how he questions life and such. (Very Positive)

Pizza loves their sibling, Bustard, despite not being blood related. They both can relate to each other, and Pizza allows Bustard to open and be themself around them, and Bustard lets Pizza do the same as well. The two share the same interests and they both approve of their anime tastes.

"Oh, you like Fire Emblem AND Danganronpa? Well, I see a fellow dragon of culture."

Pizza really enjoys Noble's company and loves how creative the NightWing can be. Though she can be sensitive, Pizza just likes Noble's stories, art and references. She would love to hang out more with the NightWing, but will respect her decisions to be alone most of the time. (Positive)

Pizza loves this dragon! She's so sweet and kind, and he can heavily relate to her phobias. If anyone disagrees with how  kind she is, Pizza will pull out his katana and slice em up! He just wants to give the SkyWing-SandWing hybrid a big ol' hug, despite her being a firescales.

Even though Pizza gets triggered when Sunset pronounces Danganronpa wrong, he still loves her like a TRUE friend should. (Very Positive/Friend)

Pizza honestly loves Venus in the no homo kind of way. She likes to irritate the green SandWing constantly, and wishes that Venus would just become a little more carefree and open up to others around her, though that's just Pizza's opinion. Overall, Pizza just wants to be Venus' friend. (Super Positive) 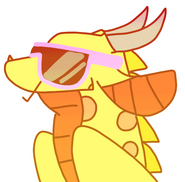 Some art by me! 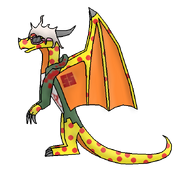 Pizza cosplaying as Nagito Komaeda by Wolfy Mesmer! Thanks! OwO

"Nagito and I are similar if you think about it."

me and my gf *villager noise*
Add a photo to this gallery
Retrieved from "https://wingsoffirefanon.fandom.com/wiki/Pizza?oldid=2126733"
Community content is available under CC-BY-SA unless otherwise noted.