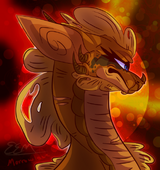 The following code and template have been compiled by Unique.

Unless told otherwise by myself alone, please do not steal/refurbish/use my coding!
Theft of this template and the page's coding will NOT be tolerated and will result in an IMMEDIATE warning and ban.

belongs to sora!! new sona!! feel free to use her for anything just ask me first

Otterpop has a short figure, not close to the height of most normal dragons. Her frame is small and mostly thin, resembling that of a four year old's rather than a six, like herself. Her head is rounder and she has a stumpier snout. Otterpop's horns are more curly and a little on the large side. But it compacts to look very nice in general, even if she is certainly not the prettiest dragon you will ever see.

The main of her scales is dark grey, and the shape of them resemble a NightWing's. She has the rows of teardrop-shaped scales near her underbelly, which are a pastel, pale pink color. Some of them fade to a darker orange-pink. Otterpop's underbelly is also light pink, but in the very center of her underbelly, furthest from both scales, the color ombres into a dark red.

Otterpop's wings are around normal-sized, due to her being half SkyWing, and they have the power of a small SkyWing dragonet, allowing her to be quick and nimble in the air. The membranes are dark red with a very pale pink stripe running through each of the membrane portions.

Her back-scales, claws, tail tip, and horns are all light pink, some of her features (like her horns) ombre to dark red at the ends. Her tail tip also does this.

Otterpop's eyes are a pale teal that increasingly get darker the closer you get to her pupil. Each of them refract the bright colors pastel pink, pastel yellow, and pastel blue, creating those colored dots on the outer edges of her pupil, just off of it.

She also wears a pastel teal bandana with the pansexual flag stitched onto it in the center, pastel pink, pastel yellow, and pastel blue. She's very prideful about her sexuality.

Otterpop is a very friendly dragon. Sometimes too friendly. She's cheerful and also very loud. The hybrid tends to worry people with her excessive and never-ending supply of energy.

She's bright and loves to show new people she's just met things. Otterpop is what some dragons may consider "popular", only she's humble and dodges every word of it.

The hybrid, is, unfortunately, sometimes broken. Her energy can and will drop almost instantly, if anything she feels goes wrong. She makes lots of mistakes and sometimes doesn't learn anything from them, resulting in bratty behavior and immaturaty, although she is learning and trying to get better at this.

Weapon Combat: Using her baseball bat, which is wood and wrapped in plastic with a flower design, Otterpop is quite strong. She hardly ever needs to use this, as physical combat is rare in the beach town, and this kind of violence is illegal.

Flight: Otter has extremely fast flight. Not quite as fast as a full-blooded SkyWing, but she has larger wings and a small body, giving her the ability of flying as fast as a 3-4 year old SkyWing who's wings haven't fully developed, but they can still move around in the air very fast.

Fire: Otter has extremely hot fire, hotter than any normal SkyWing's. The fire is so strong that she often cannot breathe it without hurting her own throat. She chooses to hardly ever use her fire due to her constantly coughing smoke after using it.

Intellect: She's fairly smart. There really isn't much to say, she is not a genius or a child prodigy. She exceeds in language arts and world history, but cannot stay interested in science and is not any good at math.

Athletics: Otter isn't good with athletics. Sure, she can run, fly, or hit a baseball, but she really isn't good at understanding what to do during sports and cannot do many push-ups or sit-ups.

Technology: This is Otter's true strong suit. She is incredibly smart with technology and has run multiple online background checks, rid computers of viruses, and outsmarted bad people online. She's eager to meet new people online and isn't very wary of anyone-- but if they give her bad vibes she can easily ruin their online lives if they try anything.

Otterpop was hatched fairly normally, to Thoughtbreaker, a fantastic and smart NightWing who worked with the army, and Marble, a beautiful SkyWing with a tight yet kind personality. Her family moved around a ton because of her father's job, resulting her gaining and losing friends often.

From a young age, Otterpop could be considered slightly spoiled. She often got whatever she wanted from her father, but her mother made sure that it never went overboard.

Otterpop also suffered from an eating disorder early on, making her late in developement and making her pretty small and thin, although over time she did manage to gain a lot of the weight back, but kept her short structure.

Otter's little brother was hatched, a deep orange dragon rather than her own pink and black coloring. He was called Pumpkin. Things began to fall apart after that as Thoughtbreaker and Marble fought more often. Otter caught onto the tension and tried often to reason to her fighting parents. Fortunately things never got physical, but it scared her and her brother plenty.

Her parents divorced and Marble took hold of both of the dragonets. Thoughtbreaker married to another NightWing and they hardly saw him and his new wife, Rosemind. Otter began attending a new middle school and was considered "semi-popular", as she wasn't that great as physical or mental activites but was fairly good looking.

Otter joined percussion and gained friends quickly, but drama rose and went down again as she was caught with annoying best friends and rude others. Over time, she completely settled and met one of her only long-term best friends, Rosegold. She and Rosegold hit it off immidiatly and have been close friends ever since.

Three years of the same school passed until Otter went to the next level after intermidiate middle school and gained quite a few more Percussion friends and reunited with some older ones. Everything had been going great so far, and then school let out again. The summer came and Otter was often lonely while visiting her father, missing most of her friends. (WIP!!)

Rosegold: "!!! I LOVE YOU u are the best dragon ever oh my gosh. rosegold is really pretty and really awesome and super smart and is the best derg on the face of pyrrhia"

Otterpop really does love Rosegold. She's her best friend and has always been there for her. Rosegold is the only dragon that Otter trusts fully, and would confide in her any day. She hopes to always stay friends with Rosegold, no matter what happens.

Blood Moon: "hebhuebf you are my good friend m'dood but killing ants is not coooOOOOOOL.., owo still love u"

Otterpop considers Blood Moon to be one of her best friends in Pyrrhia. She thinks its really cool how they are (almost) the same tribes and have a lot of the same interests (other than Pokemon). She really would hang out with Blood Moon any day.

Jacaranda: "oof one of my best friends here!! thank you so much for staying with me ever since we met haha"

Otter thinks Jacaranda is great! She would love to hang out more often with the mysterious hybrid. She thinks the visual of her energized self dancing around an enigmatic, grumpy Rain/Sea is one of the best things to think of.

Disc: "she's awesome!! i think she's a really really great friend and is considered one of my closer friendos."

Otterpop considers Disc as a very good friend, and loves talking with her. She absolutely adores her art as well, and loves to see the improvement from when Disc first began posting. She would love to talk with Disc more often.

Wings: "another sky/night hybrid!! wings is SOOOO cool,, i just kinda wanna be her best friend?? she's the cool older person that everyone just wants to get to know so much? ggosh"

Yeah, Wings is really that older person. Everyone's had them- the older person that they think of so highly because they'll talk to you. That's how Otter thinks of Wings. She'd love to talk with the Sky/Night more.

Santoka: "OWO i need to spend more time with you!! ur so nice and wonderful uwu"

Otter is good friends with Santoka. She absolutely loves playing video games with her and would like to do it more often. She'd hug Santoka any day and isn't afraid to ask support of her.

Otterpop thinks dreaming is nice. Overall, she thinks that Dreaming is a nice dragon and would like to chat more. She is still a little wary of Dreaming, but that could easily be solved by the two of them talking more!

Kukui: "i kiss my pillow too because I'm gay" Otter doesn't know Kukui as much as the others, but would love to talk more! She considers Kukui to be closer to her than the other dragons listed below, however.

Storm: "oof i don't really know her but she's cool. i'm gonna have to talk with her more i think uwu"

Sabotage (CB): "aa!! I've seen him once or twice around uhh, he seems really cool and nice and i'd love to talk with him more !!"

Lightsearcher: "light is super pretty and but,,really quiet. i can't seem to get close to her yet, hmmmnnnnmhmmhm .."

Asteria: "she's super cool!! she's also a nightwing hybrid which is really cool! she also likes the same music as i do ouo"

Sprocket: "OOF she's super fun and i LOOOOOVE her steampunk style! i want her goggles really bad so imma snatch them"

pixel by nibby!!! thank you so much!!

by yurimonger!!! thANK you so much i really appreciate it!!! 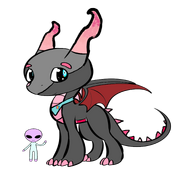 by ivyfrost18!! thank you so much, the little alien is adorable!!!

by lightdragon935!! thank you so much, you have such a cute style!! 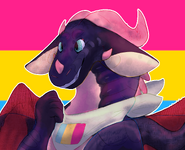 by enigma!!! thank you so much gggosh??? 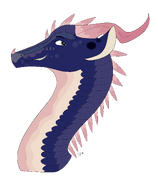 by morrows!!! i love ur style gosh and these colors??? 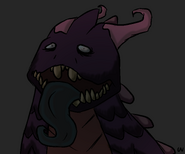 A SPOOKY OTTER BY CONSTELLATION!! thank u!!!

A set of Insignias for Otter by CB 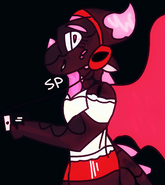 by me i'm not a furry (but if i practice my anthro style furries can pay me to draw characters >:) 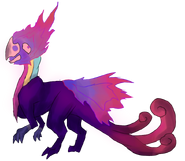 by spero!!!!! thank u so much!!! i love it!!
Add a photo to this gallery
Retrieved from "https://wingsoffirefanon.fandom.com/wiki/Otterpop?oldid=2639267"
Community content is available under CC-BY-SA unless otherwise noted.