NIGHT WIND BELONGS TO PEAK! DO NOT STEAL, EDIT, OR COPY! ASK ME IF YOU WANT TO USE HER! THANK YOU!

I got special permission from Wings to make her

Walking down the street, you catch a glimpse of a miserable-looking DeathWing. Her neck is long and graceful, but as it usually is, is hunched over. She would have great posture if it were not for her sleep deprivation. Dark circles line her eyes, almost shadowing the fear in them. She hears you coming and looks up at you. One glance, and then she turns and runs in the opposite direction. What an odd dragon.

Night Wind is a pretty dragoness; her scales are a beautiful coal black, contrasting sharply with her snow-white mask. Her dark brown eyes would be gorgeous if it were not for the obvious pain, fear, and mistrust that you could plainly see. Dark circles lay under her eyes from the sleepless nights staring at the walls hearing the spirits in her room.

Her body build is sleek and graceful like that of a cat. Night's neck is long and arching but only looks toward the ground, giving her neck pains and horrible posture. Her legs are longer than most's and she is tall, but every inch of that is hunched with fear like she is trying to make herself as small as possible.

Night Wind can hear and see all of them. They can talk to her and see her and she can do the same. Even in the day, she can see the faint outlines of them floating around, whispering and hiding from the sunlight. It is a miracle that she hasn't gone insane from the stress yet; the added side effects of being able to see spirits would drive anyone else crazy.

Other than that, she's not too special. Night Wind has a knack for knowing lunar and tide cycles and she's not very good at using her vapor. Neither can she fight, kill, or maim any dragon, even when she is at her stress limit.

Ages are referred to in human years

Night Wind hatched as a joyful dragonet. When she first came out of her egg, she saw her parents gazing down at her in awe and love, but that wasn't it; spirits, shimmering faintly, made out of glittering outlines, filled in with dark shadows. They hovered by her parents' shoulders, some grinning, some laughing, some cooing and others glaring at as if they wanted her dead. Night Wind had looked at them curiously and laughed, at which their faces turned stark and they disappeared.

She didn't pay them much heed for the first year or two of her life. She left them alone, getting occasional nightmares but they usually were short and mundane. That changed when her older brother came back from college. The first day he came back, a group of rude spirits hovered around him, making rude gestures and calling him dirty names. Night Wind didn't like it much; as they were leaving a room, Night Wind promptly called them out for making fun of her brothers and stuck her tongue out at them. They all laughed and left.

The night that followed was the worst one Night Wind had ever had. Her nightmares were more vivid, more real. Spirits threating to kill her floated around her subconsciousness and she couldn't wake up until the following morning. When she woke up, the spirits were back, circled around her bed. They told her that if she crossed them again, she would suffer worse consequences than the previous night.

Over the years, the spirits started to become more violent. She suffered nightmares every night and murderers watched her as she slept. Others followed her around, talking, whispering, mocking her. At times, they forced her to go to graveyards, knowing what would happen, threatening to hurt her if she didn't. Night Wind started to keep herself up, not sleeping to avoid nightmares.

Around her tenth birthday, she was invited to her first sleepover. Her parents reluctantly let her go, knowing that her nightmares would keep her up at night and possibly scare the others. Night Wind went over to her best friend's (Frozen Pine's) house and had a great time, the first in many years. They stayed up until midnight, joking and laughing and spilling secrets. Night Wind became exhausted; Frozen Pine could see that and suggested they go to bed. Night weakly protested but collapsed onto the extra bed and was asleep instantly.

A horrible nightmare plagued her; it was of her family dying, spirits screaming, swirling black masses covering a silver figure in the distance. A maniacal laugh echoed through her head as she covered herself in a blanket in her room, the masses coming closer and closer until she woke up screaming. Frozen Pine fell off her bed with a thud, trying to take off the blankets wrapped around her legs.

It woke up Pine's sister, Snowy Lake, who came running into their room to see what was wrong. It took them an hour to calm Night Wind down. When she was calm, Night Wind was pressured into telling them her secret. It freaked both of them out but they promised not to tell a single soul.

Three years later, Snowy Lake fell deathly ill. Frozen Pine was heartbroken when Lake died in her sleep. Pine wouldn't eat or go outside or talk to anyone when her sister passed, plunging into a pool of misery, only asking Night Wind if she ever saw her sister floating around somewhere. The reply was always no, she did not. Night Wind didn't understand why she didn't see Snowy Lake immediately as she did with the others; the only difference is that Snowy Lake didn't fear death, and to Night Wind, that meant possibly losing a friend to grief.

Months after, Night Wind was almost asleep in her bed, her eyelids wavering open and closed when she saw the familiar figure of Snowy Lake emerge from her wall. Though alarmed at first, she calmed down quickly. Frozen Pine was overjoyed when she heard this and steadily started to regain her health. Night Wind benefited from this too: with Snowy Lake around, the nightmares slowly dwindled into an almost-bearable state.

That was, until Night's thirteenth birthday. Always superstitious, she knew that something, just something would go wrong.

And it went worse than she expected.

A silver dragon appeared in her dreams, prowling around the edges of a dark cave made entirely of a black, surreal substance that enveloped her lungs like smoke. When the dragon slunk closer, she realized that it was an IceWing who was very much alive. He stated that his name was Crevasse, an IceWing necromancer who lost his family. He was compassionate, telling her about his past, drawing her in to trust him, telling her that he knew how she felt. Night Wind had never met someone like herself before, and, even though every instinct in her was against it, began to like him.

Time passed. Not long after, her family had an unexpected visitor that forced her family into hiding.

It was a corpse, with gaping holes in its bloodred scales, swirling black masses covering the most grotesque parts of his wounds. His eyes were empty and dead. It spoke in the voice of the silver dragon, telling her family that it was cursed, that something was coming for them. Night Wind felt like a fool for putting her faith into someone so wicked who now knew who she was.

The next day, her family abandoned their cave. They moved to a bustling SandWing city, remaining inconspicuous as an out-of-place DeathWing family could. Night Wind still lives in fear of being found by the cold and cruel necromancer who first discovered her. 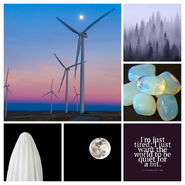 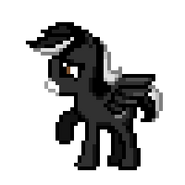 Night Wind as a pony by Morpho!
Add a photo to this gallery
Retrieved from "https://wingsoffirefanon.fandom.com/wiki/Night_Wind?oldid=1560648"
Community content is available under CC-BY-SA unless otherwise noted.