Start a Wiki
please don't edit or steal coding.
~
Something To Remember

i will never forget you, for you were the reason i smiled every day.

aquamarine scales, with a light sapphire underbelly. his wings are a gradient of indigo and zaffre, and are decorated with royal swirls that are the same hue as his underbelly. glow-in-the-dark stripes are sapphire, and his horns are indigo. he has deep grey eyes, like the clouds on a stormy day.

awkward is probably the first word any dragon would use to describe. he locks himself in the library, his room or is alone on his island of blue. awfully shy, extremely self-conscious, detests attention and very secretive. he's quiet and doesn't talk to anyone, except for cascan.

he isolates himself and is not accepted for his mediumship powers, especially by his own mother, queen pearl. he doesn't have many friends, only one to be exact, and is amateur to the idea of friendship. he bottles up his emotions, which can lead to him sometimes losing his temper and being confused about his feelings towards others. he's not too good at social interactions and is often quite stubborn. to him the world is a confusing, beautiful yet mysterious place and he wishes to uncover it's secrets.

zafria is his older sister by 4 years. when neptune was neglected as a dragonet, she was the only one who spent times with him, despite the severe consequences. he loved her very much, and still does even though she has passed away.

cascan is his best friend, and current boyfriend.

queen pearl is his mother. she has neglected and looked down on him for almost his entire life. however cascan helped her understand what she was doing was wrong and showed her that neptune didn't deserve that. they are currently trying to mend their relationship, though it is a hard thing to do. 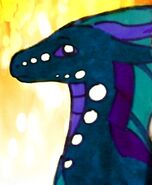 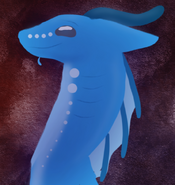 by cloud!!! tysm!
Add a photo to this gallery
Retrieved from "https://wingsoffirefanon.fandom.com/wiki/Neptune?oldid=1001238"
Community content is available under CC-BY-SA unless otherwise noted.