Moon's eyes are very bright glossy blue that almost glow in the dark. They would be cooler but his eyes do almost nothing to contrast from the rest of his body, making them stand out less against the big mass of gray-blue that moon is.

Moon’s sail pattern is fairly simple. It consists of two colors, the backdrop of the membrane being the same bright blue as his eyes, and the pattern being the rich, royal DriftWing black. The pattern on the sail itself is centered around repeating diamonds, with straight lines between the diamonds and a ‘lesser-than’ sign under the diamonds. Compared to some of the more flashy patterns, Moon’s is underwhelming. He thinks the simplicity is grand, though.

Moon’s build is fairly scrawny, but he has some small muscle feature in his arms. He is also pretty short. The top of an average-sized scavenger’s head would probably come up to his shoulder.

In summary, Moon is a lil' dork. He looks up to most of his siblings (for different reasons) and is generally a cheese ball of sunshine. The second part of Moon consists of his caring of his pet, Moon Jr. who he loves dearly and protects with his life. There is a secret part of Moon that loves playing the Viola but he's not very public about it, and is very selective of who he allows to hear his music. (He’s only comfortable playing to his brother, Upsong.) He just thinks that he’s not very good and that other dragon would find his playing annoying, even though he’s pretty decent.

Moon bites his claws, which makes them short and not very useful. But it does help when he plays his instrument, as having shorter claws helps with the strings.

Moonseeker’s name comes from the time as a newborn, he flew up high and tried to grab the shining, full moon. He was so infatuated by the brilliant moon that he broke into his older sister's room just to get a better look at it.

Graceweaver- Moonseeker appreciates the hard work his mom does to stay close to her children. He thinks that it must be hard to be a role model for so many people.

Blazecaster- Moon doesn't know his father. At all. All of the times he’s visited, Moon was in school or buying food for Moon Jr. From what he’s been told from his other siblings, his father isn't very pleasant to be around and kind of a jerk. He wants to meet him, though, before he makes assumptions about him.

Dreambreaker- Moon probably looks up to his older sister more than anyone else. He doesn't understand how carefree and downright amazing she can be.

Lightspinner- Moon thinks that Light is kind of annoying. He tries to accept her, because he knows that she has ADHD, but it’s hard sometimes. Also, he absolutely loves her pet sloth.

Flynn- Moon absolutely loves Flynn and his amazing personality. He always feels warm and fuzzy when talking to him.

Stormcaster- Moon thinks his brother is hot. He doesn't like talking to him a lot, but admiring his beauty from a distance is regular.

Driftwing base by Resa, haphazardly colored by JB. 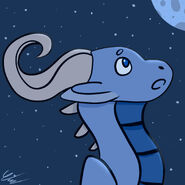 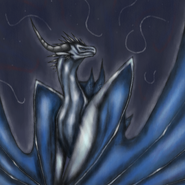 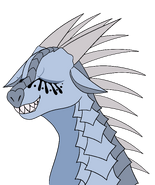 new art by wolfkeep/steph
Add a photo to this gallery

Moon Jr. is Moon's pet Peacock, she is sassy, smart, and beautiful.

Moon is very forgetful, and Moon Jr. takes advantage of that. Whenever Moon accidentally leaves the door to his room open, Moon Jr. takes the opportunity to escape. She usually hides in Dreambreaker's room, under her bed.

Retrieved from "https://wingsoffirefanon.fandom.com/wiki/Moonseeker?oldid=2063404"
Community content is available under CC-BY-SA unless otherwise noted.