Metalmark is a female SilkWing. She was once friends with a HiveWing called Braconid when she was in Wasp Hive, but left him to die after he stole the Book of Clearsight. Soon, she moved to Ciada Hive, where she gave birth to a green SilkWing named Hairstreak, and now works on the construction crew. Metalmark is incredibly loyal to Wasp, yet she's spunky and sassy, throwing insults and comebacks everywhere she goes.

Her job describes what she looks like. Brown and silver, anger and smirk always on her face. Which is why Metal was named after the metalmark butterfly.

Standing tall, like a soldier. She keeps her talons still, but is commonly seen twitching her antennae and tongue. She lashes her tail at strangers, and when she walks, she stomps on the ground that can make fragile grounds rumble, although it's totally unintentional and Metalmark does not plan it.

Metal has a very rocky and big snout, and her jaw was incredibly thick. Her eyes are petal green, sometimes filled with dirt, almost giving it a rusty look. Her atenanae are metal grey, while her horns are dark brown, almost black. Her ears are small, yet they work just fine.

Metal's neck is filled with ,muscles, and is very short. The dots in her spine are silver, on top of a different brown shade. The spikes on her back and the same colour as her horns, with her underbelly greatly dark. Since she has already reached her metamorphosis, her wings are ginormous and take a bunch of room. Silver streaks flow through brown like petals, tiny blue spots dotted all over them. Metal has grey eyespots on the top of her wings, slighty covered by the blue spots.

Metalmark has biceps in each of her legs, pumping with sweat all the time. Her talons curl, just like her black sharo claws, something her son inherited from her. Each silver dot is covered with dirt and rust, leaving really messy and stained scales. Metal's tail has a curvy end, still made of purely muscle.

Metalmark has the powers of a normal SilkWing. She can sense danger through viberations with her antennae, and can easily climb walls. Already going through her metamorphosis, Metalmark has a superb use of silk and is very adapt to her flying abilities.

Metalmark has tons of knowledge of construction use, such as tools and a vast idea of how cranes and building work. The SilkWing is also a greatly advanced reader, and knows a bunch about Silk studies. Metalmark has a great idea of butterflies, due to her sons rambling about it.

Metalmark is a horrible actor, and anyone can tell when she's lying. Her sass may also get her into trouble, and it has on several occassions.

Metalmark was hatched in Wasp Hive to normal SilkWings. They found her looking like metal, so they named her Metalmark. Life was fairly normal for Metal as a dragonet. Sure, she had a huge spunk. But, she still studied everything she knew.

Everything changed when she got her wings. Metal had fell in the usual trance, and when she got out, she was assigned to the construction crew group. During this, Metal had been noticing a green HiveWing watching her. He soon came up and introduced himself, as Braconid. Metal smiled as they both became friends.

During that time, Metal had grown an undying loyalty to Wasp. Sure, she got in Misbehaviours Way a bit for sassing her way and making insults, but she resoected the queen with all her heart. Noticing Braconid had dissapeared to the temple, she followed him, unknown to him.

When Metal noticed he was planning to steal the book, she was shocked and enraged. When Braconid confessed her love to her, Metal left him to die in the hands of the librarian. She quickly moved immediately to another Hive, and forbid herself to fall for someone.

Soon, after a bit of arguing and comebacks, Metal had moved to the Cidada Hive. She hatched an egg with an unknown mate, which turned out to be a green SilkWing named Hairstreak. Metalmark loved that dragonet with all her heart, but noticed how different Streak was. He kept his head low, and let others tramp on him. Still, Metal loved that dragon.

One day, they went to the Mosiac Garden to look at all the murals. She smiled as Hairstreak had bonded with the butterflies in the garden. She commented with happiness as they landed on her head. She sent Hairstreak to the school, SilkWorm Hall, now still attending at her construction work.

Tell me what you see from Metal: the first thing that comes to mind is sass. A comeback or insult is always on the tip of tongue, and is always easy to anger. Metal has a huge spunk, probably due to her work and past. She can disrespect anyone she wants, even royal HiveWings. After all, she left her friend to die, showing loyalty. This leads to a few Misbehaviours Way trips, but Metal personally wouldn't care one bit.

Metal, of course has a mothers instinct. She has a protective nature, ready to protect her son and his friends from basically any threat. This leads to a nervous yet arguative state when Hairstreak has gone somewhere without telling her, and can constantly have a spazz because she's a mother. She uses her parentage status to her ability, always giving playful threats to her son, like smacks or being grounded.

Metal is very defensive about her work, and adores it. Her loyalty is Wasp has been proven to be unbroken, and has desires to even build a whole Hive! Metal hates liars, and would be very angry at finding out the truth. She knows what Wasp does is good, but mind controlling a bunch of dragons? Nope. Metal likes people having their own mind, so she can be cocky with them herself and not the queen.

Braconid was at one time, a friend of Metalmark's. He felt slightly ignored, and Metal was there to comfort him. One lie broke their friendship, though, as he tried to steal the book to test his "invisibility", leading Metalmark to leave him to die. After that, Metal despises Braconid, and wishes to never see him again.

Despite Hairstreak keeping his head down and is nothing like his mother, Metal loves her son with all heart. Explaining to him all the SilkWing strugggles and advantages are one thing, but she always reads a story to Streak when she's back from work. Sure, she gets angry. But, it's her son.

A Metalmark aesthetic by me! 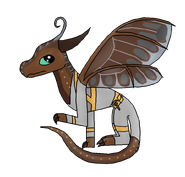 Metalmark on Halloween as a construction worker, by Wolfy Mesmer!

Metalmark as a human by Sby! Thanks!

Flight Rising Metal by Sby! Thanks!
Add a photo to this gallery
Retrieved from "https://wingsoffirefanon.fandom.com/wiki/Metalmark?oldid=1870331"
Community content is available under CC-BY-SA unless otherwise noted.