Mermaid has teal-ish scales on the top half of her body (#0674a0), light blue underscales (#3ccee8), dark teal horns (#09697a), light blue light-up scales (#78dbed). She also has a fish tail instead of a dragon's back legs, so here are the colors for that: small black and white stripes line the sides of her tail, a light lavenderish color is in the middle of her tail (fades as it gets closer to the bottom in a triangle shape), she has lionfish like sidefins at the top with a light lavender webbing in between, and lionfish fins down the back of her tail.

Mermaid has always been a sweet-and-sour type of princess. If she is swimming through the air in Jade Mountain Academy, she will look for fellow students to welcome. She will swim up and say hi, and then probably swim away with a cheerful goodbye. However if she doesn't get something she really wants, she will make a small tsunami at the dragon who won't give her it. Also, she gets very protective of who and what she loves, and she will do almost anything to keep them safe. She can lash out at times, and tends to be easily angered. She gets very angry when anyone touches the ones she loves.

Mermaid has an animus curse that was put on her when she was 3. She used to be a normal Seawing, able to walk and survive on land, but one day she was wandering the beaches, and a strange dragon came up to her. The stranger threw her into the ocean, and that caused her animus powers to act up and try to save her from drowning (she had underdeveloped gills when she hatched). This caused her to be stuck as a half-fish half-dragon creature of beauty, for the rest of her life.

Mermaid has had a good, but rough history. When she was an egg, Auklet took her everywhere. She has always been spoiled, and never has wanted the throne. Once she was captured as an egg, by a group of Nightwings. They planned to sell her to the Scorpion Den in the Sand kingdom, but the sellers couldn't accept the egg, for they had no idea whether it was a genuine royal Seawing egg or not. The Nightwings eventually gave up and returned her egg to the guards that were looking for her. She went to Jade Mountain for a semester, just to try it out. She did make friends, but in the end, she didn't really like school. Once she got locked up and studied by the Nightwings. This is the reason for her hatred of Nightwings. She was studied for 4 days, and wasn't given anything to eat. She killed the guards when she got a chance, as they didn't know about her animus powers, and got the key for her chains. She lashed out later, because of her powers. She accidentally killed 20 innocent Mudwings, and is therefore feared by them. Her story is told in the scrolls, and told to every Mudwing dragonet when they are old enough to hear it. Some of the dragonets think that she is fake... until they see her on her rocks by the sea. Her picture is in the Mudwing scrolls, so the dragonets know to run when they see her. She is thought to be a monster. She is a skilled fighter, but has more to learn from her teacher, Clam.

By me, in an anime maker 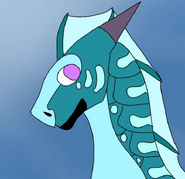 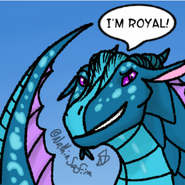 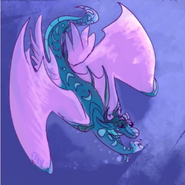 mermaid as a smol bean, wanting to be magic 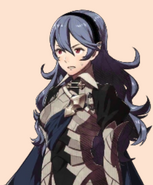 when mermaid plays fire emblem fates and selects her avatar: lol thank you?
Add a photo to this gallery

Retrieved from "https://wingsoffirefanon.fandom.com/wiki/Mermaid_of_the_Seawings?oldid=2513169"
Community content is available under CC-BY-SA unless otherwise noted.