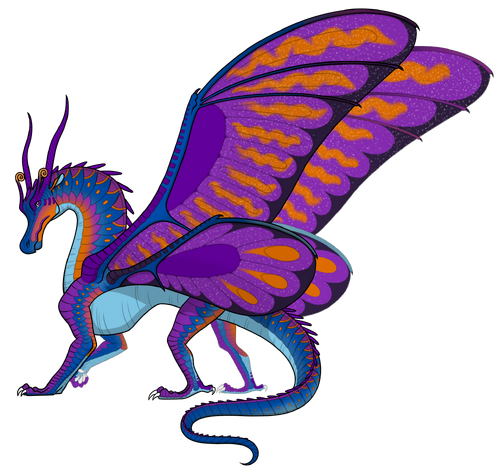 M A R I P O S A
This character belongs to BanderItchy. Do not steal/edit/use without permission. Coding by AvalonCat, edited by Itchy.

Mariposa is a female SilkWing who has just finished her metamorhisis. Straight after, she travelled to Pyrrhia to tell Andrena to return to Pantala to save the day. A curious and friendly dragon, Mariposa is as innocent as sugar.

A P P E A R A N C E
Mariposa is a very skinny dragon with very few muscles. She keeps her tangerine antennae curled like a cutie, and her horns are large and thick. The SilkWing has a combination of purple and orange on her ridge. Mariposa has dark blue with a glimmer when she's happy. Her mouth always curves into a smile, and appears to be constantly like that. Mariposa has a large ear, like a dog when it's upset.

Mariposa has a baby blue underbelly. Her scales are normally orange, but purple had glided through it, which Andrena calls as a fresh stroke of paint sliding onto her scales. She has orange dots fluttering on her back, tiny yet very noticable. Her purple spine has a sharp edge, yet you get the feeling that it won't do any damage.

Mariposa's talons glitter in the sun like daisies. She looks perfectly clean, and her legs are perfectly sleek and have a normal SilkWing stereotype posture. Her wings are purple, yet the orange stripes are wiggly like the ocean waves. Her tail is straight and skinny, like the rest of her body.
P E R S O N A L I T Y
At first, Mariposa seems like the average SilkWing. Sweet and innocent, she seems to enjoy being a second class tribe. She lets others trample on her, and would never cause trouble. She seems to always obey the rules, with a curious addition. She loves to learn stuff, and asks questions a lot. She wonders what is in the book of Clearsight, but is always taken back by other SilkWings.

However, that's a side she only shows. Mariposa has strict beliefs, and takes huge risks to make them right. Mariposa displays a coregeous trait, and would sacrifice herself to continue the mission. Mariposa doesn't hate the queen, and would not dare to kill her. However, she knows what the queen does usn't right. Mariposa would prefer to change the opinon of another instead of fighting them.

She believes that anyone can do what they want, with huge kindness. This leads her to be way too trusting for her own sake. Mariposa feels that betrayal came when Clearsight arrived. She holds a grudge for the NightWing seer, because the Tree Wars started because of her having all those HiveWing children.

Sappy and loving, she always has a kind word to say on the tip of her tongue. Mariposa is indeed one who will always be your friend, with her risks to show she is loyal. Along with being naive, Mariposa is one you need on your adventures.

S K I L L S
H I S T O R Y
Mariposa grew up in a kind family, to a few SilkWing parents. They raised them to be kind, and obident like many others in the public, and Mariposa's parents were the perfect example and sterotype of one SilkWing.

However, that's only what they showed people.

In private, Mariposa's parents were part of the Chrysalis, a group to overthrow Wasp. In this area, the parents talked horrible words about the HiveWings, often destroying the hideout at times.

Mariposa never knew that. She only saw the kind, obident side of them. And, she followed that, finding them the perfect example.

Until they were found.

Mariposa found out her parents rebelled, and the dragonet remembered her parents thrown into prison, the cuffs tying them together, unable to use loving motions to their daughter. Not that Mari thought she was going to get one, anyway, after their betrayal.

But, she did. And......Mariposa called it the most heartbreaking thing she ever witnessed.

"Come here," Mari's father replied, with a surprising kind voice, not the harsh one he used on the HiveWings. "Don't waste your life, be great."

"Remember us, don't waste it. It was for the greater good." Mariposa's mother beamed suddenly, a smile on her face, like a daydream. "Don't trust Wasp, she's doing horrible stuff......"

Then, her two parents, once loyal to Mari and loyal to the queen, now disrespecting Wasp, stabbed themselves with their tail, blood chortling out of the chests......until they died of blood loss.

After a while, Mariposa followed thier last words, and watched the HiveWings and Wasp with hawking eyes. Then, it clicked. Wasp was controlling the HiveWings. She didn't care for anyone except her own rule.

Still, Mariposa was never going to follow her parents way of handling it. It wasn't her way of ending a war. She'd send someone from the other continent, after her metamorphisis. A goal to save the day, save the SilkWings, or ar least get a new heir that would make Pantalan a better place.

One day, Mariposa was off to the market, buying a few candies until a dragon came along. Kneeling on their knees, the dragon spoke in a croaky voice:

When Pyrrhia has found a saviour,

The world will crumble, with one's behaviour.

Those who flamed, prepare to burn and learn,

Never find the secrets one has hidden,

As many have been forbidden.

Find the one, concealed in black and red.

Capture the girl, the guilt of jail surrounding her, leading to her fled.

One in the colours of green,

Is never what she seemed.

Those good, a new queen will occur one year from today.

As the dragon collapsed, Mariposa knew this was a prochecy about her plan. She needed to be quick, fast.

But, she needed to come back. Bring the one back. Do everything in her own will to stop Wasp from doing more damage, without killing her, of course.