Note to anyone drawing her!!! She has a pair of prosthetic hind legs that almost perfectly match her scales, only they aren't as iridescent!! C:

Everything else will probably be changing!! Including some of the code!!

Wolfy's Sona.Do not use in Rps, fanfics, or art without permission.Lyla Is being revamped, sorry for the disorganization and lack of information in some areas :3 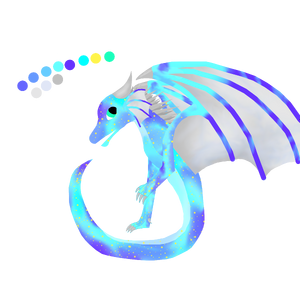 Lykaios is a rather short, thin dragonet. She has a long, snake-like body, with iridescent scales consisting of mainly tealish-blue (Hex code #66ffff) with overlapping clouds of purples and blues (#6633ff, #66ccff, #6699ff, and #6666ff). Her snout is shaped like a SeaWings, and her tail is long and whip-thin at the end. She doesn't have hind legs, as she was born without them, but she still manages to move around quite well and doesn't let it interfere with her daily life.Her wings are rather large,with a soft silvery color (#d5d9e2) for the membranes, and are lacking the 'elbow' membrane most dragons have.Her underscales are a lighter version of her main scales, and she is covered in yellow (#f7f353) illuminating SeaWing scales speckled all over her body, gathering in clusters particularly around her talons and tail.She has a large, floppy RainWing frill behind her long, pointed ears, with the frill membranes being the same color as he wings.She has large, puppyish eyes, with large black pupils and teal(#19ffbc) irises. Her horns and talons are a light grey color(#c0c0c0), though they have a rainbow sheen in some lighting. She has a line of thin, long IceWing spines going down her back with the same coloration, though they grow smaller and smaller until they eventually stop at her upper back.

One way to describe Lyla would be obsessive.She has a ton of favorite shows,books,and movies, and if you ask her who her favorite character is,it'll usually take five minutes, and even then she can never pick just one!She has a soft spot for animals, especially cats, wolves,and puppies. Lyla is very outgoing and bold when it comes to meeting new people, especially if they share a common interest.She does have a tenancy to drift off during a conversation,seeing as her mind wanders a lot. She will discuss her fan theories until she's forced to stop and can never resist a chance add some random knowledge to the topic. She can rarely have a conversation without a witty remark or some sarcasm.She loves memes, they are the best kind of humor,and also enjoys puns, no matter how corny.She is not easily offended, and actually enjoys exchanging insults, as she sees it as a battle of wits.She absolutely loves reading, memes, drawing, and hanging out with animals. Her favorite kind of animal is a Wolf, though she also adores cats and raptors.She loves being out in the rain, and cold weather is her favorite. When outside she can be found playing with animals, or climbing trees.She doesn't like heat; summer is her least favorite season(spring and autumn are her favorites).

Lykaios is very fast, but she can only fly for a short amount of time before tiring out. She climbs well,and loves heights.She can handle cold very well,but hates heat, as it makes her slow and sluggish.She spends most of her time thinking of sarcastic remarks and is never at a loss for words, except on rare occasions.She is a fast thinker, but that means she doesn't consider outcomes before saying or doing something. 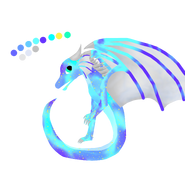 By Me!!
Add a photo to this gallery

Ask in the comments to be added. Preferably only sonas/alts, but I will occasionally add a normal oc.

Dreaming~ Lylas good friend, and fellow Marvel, Wolves, and How to train your dragon fan. Fun to talk to and laughs at Lylas puns!

Peri~ Lykaios enjoys Peris company, and enjoy talking to her

Jargon~ Lykaios really likes talking to Jargon, especially about Harry Potter and Marvel :P And likes Selkies as well as her.

Iceberry~ Lykaios loves talking to Berry, and considers her a great friend!

Stardust (81)~Lyla loves chatting with Stardust about books/scrolls, as well as blurting out random things with her :P

Morpho~Lyla loves hanging out with Morpho and shares a lot in common with her!! The two are already good friends, though Lykaios would love to get to know her better!! C:

Vaporwave~ These two get along very well, and they share many interests!! Lyla love talking with Vaperwave, who is definitely one of her closest friends!! c:

Hydra (PumpkinThePumpkin)~ Lykaios doesn't know Hydra super well, but thinks she's fun to talk to and would love to get to know her better!!

Retrieved from "https://wingsoffirefanon.fandom.com/wiki/Lykaios?oldid=2164128"
Community content is available under CC-BY-SA unless otherwise noted.