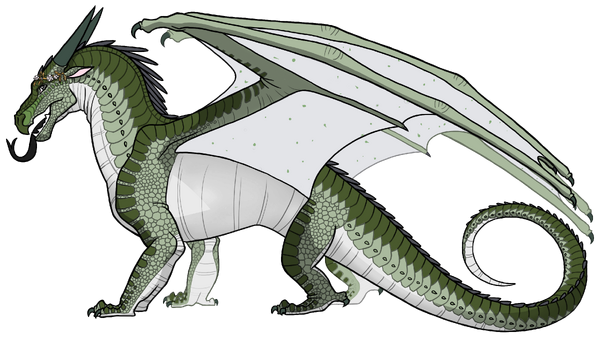 Coding is by Essence

Soft scales, ready to float off at the touch. A small body, sleek and skinny. Green scales, unusual for a nightwing. This is Laurel, the green nightwing. Well, she’s not the only one. Their sister, Rosemary, her dead baby brother, and maybe her lost parents. Well, she’s not just green. She’s bright. A wonderful, Sage green, shining like olives.

Her build is small, and skinny. Slightly malnourished, but her soft skin covers her ribs. Her scales are small. Barely seen, from a distance it looks like Laurel has no scales. At her touch, you feel calmed. Her palms, so soft. Her tail is short and thin, curving in a hook at the end. Their spines are long, soft and definitely don’t protect her. Her wings are average, if not large. Tiny stars dot the underside of their soft wings. Their wings are defiantly not made for flying. They were made for nothing. For show. If she tried to fly, her wings would be ripped. But gliding is in the range of possibility. Laurel loves gliding on the wind, trying to race. You wouldn’t say she was disabled, just soft. Very fragile.

Now for her colours. Everyone would describe her with three words. Green. Soft. Weird. Their scales are a specific shade of green. Olive at the first glance, or sage, maybe. But her scales are the shade of Laurel. Named after their favourite herb. The bay laurel. The stereotypical gold winners crown. We will get to that soon. Her topscales and crest are deep green. Dark mint green. The colour of most herbs. Rosemary, Sage, Thyme, Basil. Most herbs for Laurel’s scales. Her underscales are different, more nightwing like. A light shade of grey. Shining silver, white or grey. Tinted with green. Same with her underwings. Light grey. Their small teardrop scales are a darker green. Basil, brighter green are the colour of the specks under Laurel’s wings. Their secondary crest is the same.

Her crown, her wonderful Laurel leaf crown. Deep gold. Real gold. Made by her sister, Rosemary, a talented metalworker. The colour is deep. Gold, but tinted with a deep green. A wonderful fit to her green and grey colours. Laurel loves it. She sometimes pokes wonderful, blooming flower blossoms in the gaps, making it more beautiful. When they wither, she plucks more.

she shall not be deleted. I’m gonna vent concepts into here. Ignore them,,,

- sister that she lives with

- lives in the rainforest in a hut called “Sage Mist”

- dream job is to be an athlete,, she’s a super fast flier and practises with her sister every morning. has a wonderful garden outside her house, mainly growing herbs and flowers

- lil draggo... big sis looks after her like a mum. Both are outcasts

- weak fire. sister has strong fire. Is fine with it

- very good artist. is kinda addicted to herbs so does still life paintings.

i suck at history...

-cast her out cause she was green

-sis was green too so cast them both out

-sis built the sage mist and they stayed there

-rosemary made laurel her gold laurel leaf crown. They both still thought they were deformed rainwings. Rosemary was a good metalworker, and laurel a good painter. Artists apparently run in the family.

- her name was found after researching shades of green

- their parents are unknown

- rosemary is 5 years older than her 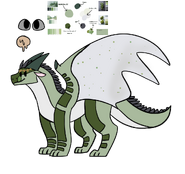 Simple jada by me! 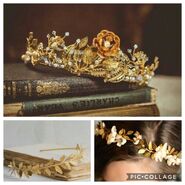 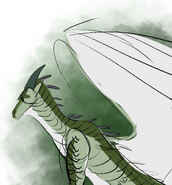 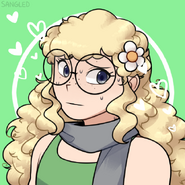 as a human by me 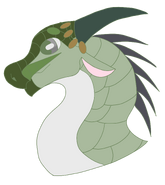 by lacey as some secret thing

Reference (with scales) by pokeball
Add a photo to this gallery
Retrieved from "https://wingsoffirefanon.fandom.com/wiki/Laurel?oldid=2087826"
Community content is available under CC-BY-SA unless otherwise noted.