"Everyone says death is scary and cruel." 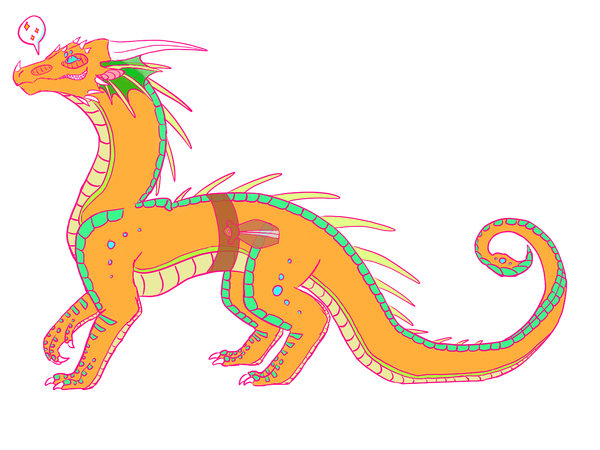 Of course, she acts exactly the opposite of what you'd expect.

This bouncy 'lil dragonet had endless energy, despite her gruesome and dark job.

But to her, it's all fun and games.

Laeta was adopted by me, Sorapaw, but originally made by Infinity! Please don't edit/use without permission.

Any similarities to Ellipsis are probably because they have the same job(with a few differences). I've talked to Sleepy about it.

"I suppose the name is kinda fitting, but a little too morbid for me."

"What I actually do is really fun though!!"

Laeta definitely isn't a normal dragonet, in terms of looks.

It's obvious she's a hybrid, the barb is a dead giveaway(don't hurt me please, bad puns are my specialty). Her spines are also much longer than a normal RainWing's, which makes other dragons assume she's part IceWing.

At first, it looks like she has no wings. But actually, all she's doing is camouflaging them.

Laeta has a fairly normal build, though a bit small(but then again, she's a dragonet). She has rather short and slightly chubby legs with a long tail. It's prehensile like any other RainWing's, but her barb sometimes gets in the way.

Thankfully for everyone, you can't see her intestines or anything like that.

If she even had intestines.

Like most RainWings, this dragonet is very vibrant. Her scales are a bright yellow-orange, while the rest of her are cool colors. The dots on her thigh and upper foreleg are a mix between aqua and sky blue, along with the ones near her eyes and barb. The thicker scales along her spine and legs are a weird green, like real but much more verdant.

The weird stripe separating the underbelly from the regular scales is about the same color as her spines, only much brighter and saturated. Laeta's underbelly is perhaps the least vibrant and most SandWing part of her(color-wise), since it's a pale yellow.

Her horns and claws are white, while her spines are an interesting pale yellow-green.

The webbing on her ruff is a translucent green, bright yet comforting. She keeps it this way mostly for the contrast, yet it somehow flows well with the rest of her colors.

Her eyes are a bright aqua and always cheerful.

Laeta always carries around her lucky shears. They're pristine and not dull at all, which sure prides herself in. She's tucked them into a belt type thing, much like a scabbard for a sword.

"I welcome souls to the afterlife or whatever!"

"I have to kill them with my shears first, though."

These words pretty much sum up Laeta's personality, though like anyone else she's still complex.

She loves greeting new dragons, making sure to be extra cheerful and spice up their day if they seem sad. "Caution" isn't a word in her vocabulary- not like she can get hurt or die, she's a ghost after all.

For one with what you'd think is a morbid job- she actually enjoys it. To her, it's all about meeting new dragons and making their day. When she ends a dragon's life, she sees it as ending their suffering and setting them free from the torture they felt before.

Aside from all that dark stuff, Laeta acts exactly like a normal dragonet. She likes to have fun and move around, and is always up to a game.

It's hard to get Laeta's spirits down once they're up- so if you're a bully, have fun!

Speaking of rude dragons, this cheery 'lil dragonet has absolutely zero tolerance for them. Be mean to her or her friends and she'll give you a good telling-off.

Which is admittingly kind of amusing to watch, seeing a pint-sized hybrid squeaking at a full-grown dragon.

But, like anyone, she'll get upset if you mention one particular thing close to her heart.

Of course, no one really knows about this(nor is curious about it), so she's rarely seen sad.

"It's not the most pleasant thing to do, to be honest."

"But someone has to do it!"

Laeta hatched a few years after the Scorching.

Her family consisted of one kind mother, one loving father, and two mischievous older brothers.

They were a happy bunch, living in a hut just off the rainforest. There was a nice pond there, along with fresh vegetation and neat rocks.

The first and second years of her life were quiet. Nothing big happened.

Then on Laeta's third hatching day, things took a turn for the worse.

She became violently sick, coughing and hacking and barely able to breathe. Her family was afraid she would die, and like any family, they didn't want that.

So her parents sought the help of a mystical healer, who was said to be able to cure anyone. The healer agreed to help and followed her parents to their hut.

The healer, who was an animus, enchanted Laeta(who was on the verge of death) to become immortal, so she wouldn't die.

Well, the enchantment kinda failed, as she had died during the moments the animus was preparing their spell.

Although it kinda failed, it also kinda worked.

After that, Laeta awoke in a dark room. A pair of scissors were floating a few steps away from her. She grabbed them and was instantly teleported somewhere.

Laeta had learned of her new job as the Grim Reaper. It was actually pretty easy. She would "kill" dragons by cutting their life string.

Many years after she began her job, Laeta was teleported to her next "friend". A MudWing/SwiftWing hybrid named Sin.

Laeta instantly fell in love with the older dragonet. Reviewing her Death Files, she was surprised to find out that she had murdered 6 dragons. Laeta thought that she didn't deserve her hell-bound home, and decided to disobey the rules and bring Sin along with her.

Laeta's love for Sin was more of a friendly love, not romantic at all. It was like she was the little girl who was partenered with an older kid for a project, and the younger kid absoultely wants to be like the older kid.

Laeta continued with her job just fine, and is really, really, REALLY happy to have someone with her instead of doing her Grim-Reaper-ing all alone.

"And I stepped up to do just that!"

"I like it because I get to make new friends!!"

"Though not all dragons take being dead easily."

"Some cry, some scream, and some get really angery."

Sin - Laeta believes Sin is a true fallen angel, not a demon, but a misplaced angel. There's something about her, it's like a little kid kinda liking/crushing on someone older, and wanting to be friends with them so desperately. Laeta isn't romantic, well...she is a dragonet, so she doesn't think of Sin much in that way. She just wants to be really close friends.

Oasis - She likes Oasis, but the tension between Sin and Oasis is unreal. Laeta, of course, sided with Sin, her best friend, so Oasis is out to kill them both again, even if it isn't possible.

"So I calm them down and make them happy again!"

"Well, to the best of my ability." 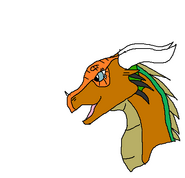 By Morrows!!! Thank you a lot!
Add a photo to this gallery
"Oh my, look at the time! Gotta fly!"

Retrieved from "https://wingsoffirefanon.fandom.com/wiki/Laeta?oldid=2273631"
Community content is available under CC-BY-SA unless otherwise noted.