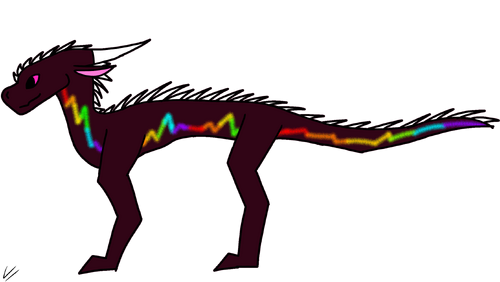 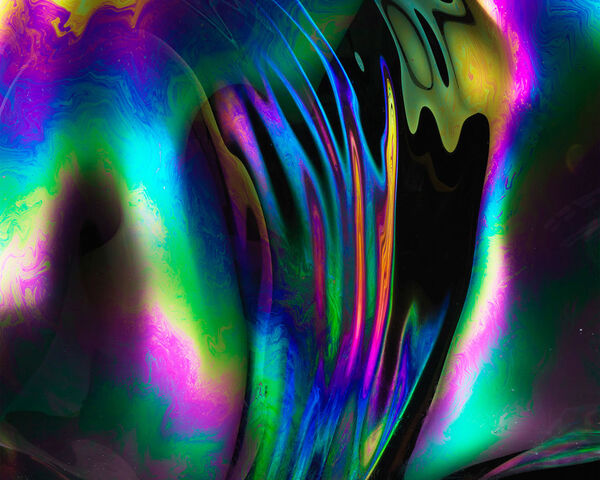 Kai generally resembles a SkyWing. They have an aerodynamic build, with a thinner waist and curving neck. Their face is fairly elegantly built as well. Their horns curve slightly and they have a row of spikes down their back, staring between their eyes.

They hatched no wings, but will occasionally use a prosthetic pair. These have dark red membranes and are very realistic, but they only use them if flight is necessary. These wings "unfold" and merge together from several small pieces of metal on their shoulders and back, the exact same shade as their scales, making them virtually invisible. Kai dislikes using them because the wings attract attention, but will if they have to.

Their scales are a dark maroon, thin and flexible. They are slightly reflective, but less so than other dragons' scales. Their eyes are a somewhat bright pink.

One of Kai's most noticeable features is a stripe on either side of their body, similar to a TempestWing's transitional scales. It starts out red at the top then fades to orange, yellow, green, blue, and purple. It is jagged like a lightning bolt. The jagged pattern is asymmetrical on the stripes.

Kai enjoys wearing comfortable clothing, like flannels, t-shirts, jeans (usually black ones), leggings, and hoodies. They'll also wear baseball caps (their favorite being a black one with the Jurassic Park logo) and beanies. Kai will also occasionally wear earrings or other jewelry.

They have the ability to channel the energy of the cosmos into various forms, including their "firebreath" and "fire-talons" (appearing as if their talons hold flames). The energy is opalescent in color, but primarily white.

Kai isn't one to stick out in a crowd. They tend to go with the flow or stay out of the way of others, unless the situation is desperate. They keep their head down (both literally and figuratively, they look at the ground a lot). Eye contact makes them uncomfortable, but it also worries them that they might not seem like they're paying attention if they don't look at another dragon if they're being talked to.

Kai is an insomniac and has trouble getting to sleep and staying asleep. They also think they have social and/or general anxiety disorder. They overthink everything and are usually convinced others hate them for wearing the wrong shirt or something. Kai also has a lot of trouble speaking to dragons they don't know or to groups. When they do, they shake and stutter a lot, as well as become extremely aware of everything they believe they did wrong, which really only makes the situation worse. They know these fears are illogical, which bothers them immensely.

They have lower self-esteem, and criticize themselves a lot. They somewhat dislike their own voice, as it's lower than they'd like, but don't normally think too much of it. They enjoy spending time with their small group of friends, listening to music, and watching Netflix or YouTube.

They aren't very athletic and would much rather stay inside and draw than go outside where it's windy and there's bugs and literally every disgusting thing. They aren't a huge fan of talking on a phone and would rather text.

When they're talking to others they don't know very well but are comfortable enough with, they try to express the best sides of themselves to seem less awkward.

Doesn't like avocados, Brussels sprouts, celery, or pineapple on pizza.

Feel free to ask to be in their relationships!!

Sabotage (Overhauled): They don't know Sabotage very well, but thinks Sabotage is cool! They like his easygoing nature and how he can speak Pantalan.

Ace: They don't know Ace very well, but think she's really cool!! They'd totally like to talk with Ace more and can definitely agree that coffee is life.

MASSIVE thanks to anyone who's added to this!! 💜

old ref by me

Another amazing drawing by RD!!!!
Add a photo to this gallery
Retrieved from "https://wingsoffirefanon.fandom.com/wiki/Kai?oldid=2132687"
Community content is available under CC-BY-SA unless otherwise noted.