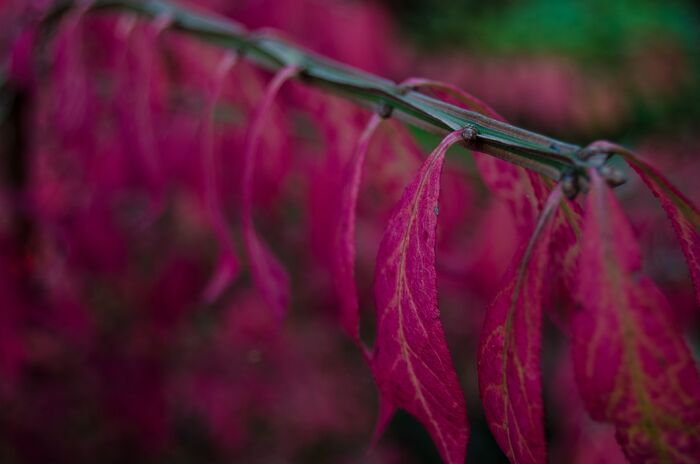 A magenta leaf is not strange when you live in the world you are about to enter. Take a leaf, the strongest give you good luck. Just take one, and I’ll lead you from there. 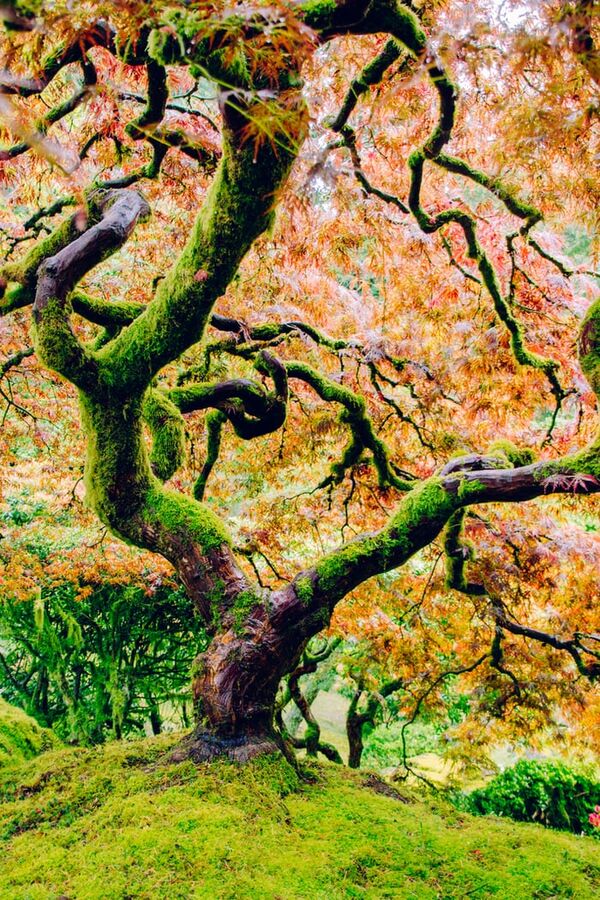 My little sweetheart for the Aesthetic Inspired Contest!

Welcome to a wonderful world

Where the maples bloom

Come into the strange place

Imagine. Just imagine, oh, how lovely an evening, while the sky is just a rainbow of love as it overlooks this cottage in a subtle way as the maples bloom. A broad barked tree comes into view as you pass only the first stage of rolling hills and you nearly trip over it’s roots, tangled gnarled things they have become, as you enter a valley where wishes came true.

Next, the second stage awaits as you step hard with little might, up and up as the sky gets closer, or so it seems, as you reach the top of the robust knoll. Suddenly, a quaint little cabin, a darling little thing comes to view, made of untidy logs rolled dumbly into place, and a flat triangle roof that seems slightly off centered, but who notices these things?

A dragonet, flatteringly much more petite then the cottage is a surprise, swinging on her puny excuse for one to swing on, singing her song as the lovely breeze encouraged her on.

A SkyWing, possibly, or maybe it’s just the sun shining on her that warps her colours? But no, the small SeaWing is an odd sight to see, yet in the average light of the sun, her colours shine bright and beautiful which gives her the name Japanese Maple.

An average-framed dragoness is what she is, stalky legs and a curvy build adding just a sun-kissed effect to the sight she possesses. A large, stumpy tail acts as a burden, too short yet thick for her size, and becomes a struggle to keep from lagging across the ground, resulting in many bruises and a raw tip.

Linear talons grip the swing chains, and teetering yellow-orange blotched claws go to and fro to keep the momentum going. Shimmering in the light of the setting sun, the tips gleam with their bluntness, unable to hurt even a fly.

Strong is not her go-to tag, nor how she has ever thought of herself. A soft, plumper body makes her completely normal, only her magenta scales differing her absolutely from the crowd. Though not entirely stealthy, it’s in her best interest to become so, and the amount of hide-and-seek her and her friends play encouraged her to practice on silence.

Swirling magenta scales may remind you of a sunset, or fiery coral, or maybe you’re just startled by the odd bright colours that make her up. Pastel autumn leaves might flutter against her underbelly, pink, orange, yellow, and pale reds in an array of fall beauty, matching with her transparent frills as they glide down her back. The scales running down her back are interestingly hued, with a pinkish colour fading down to a dark raspberry.

Glowing rosy lights shine most of the time, though sometimes they shine as though the shimmering light of a sun’s rays billowing under the sea, dancing across the ocean floor, and they do seem so. Her eyes are a bright taffy shaded pink, yet another piece of pink to add to her collection of already pink scales.

A soft, kind expression gives you the accurate insight on her, shy and insecure while being slightly crazy around her friends.

(I suck at personalities so bear with me here... just some bullet points...)

Embarrassed real easily. Like, if you laugh at her at all or she messes up once, she’ll have to force down embarrassment and laugh sadly, though unheard.

Not too smart, but hasn’t gotten worse then a 3-

Very sweet and influences her personality by the dragons around her

Without fantasizing every recess, Japan would be lost, really. They keep her creative juices flowing, encouraging her to keep going, having something to look forward to after almost two hours of work, to go and be free, even if only for a few minutes.

Obviously all SeaWings are fantastic at swimming, and Japan is fairly decent at it, nothing special.

She is just terrified of storms, which started after she was stuck in school while the storm raged outside, turning the sky pitch black as well as the waters. The only light source was their lights, flashing in the sunlight the darkness.

It’s more of what her imagination creates to live in the darkness rather than the dark itself.

Born on a day of utmost beauty, though rain coming down does soak the trees and drums hard upon the rooftop doesn’t daunt any of the plants that wait for this magenta wonder to pop out of her shell, for they already know Japanese Maple and the fire she possesses.

Her mother, Coral, is of a religion that very few believe in and is therefore not classified as a religion so. It is the religion of plants, or the belief that they have feelings, and dragons should care for them as they care for each other. They are the mute green dragons of Pyrrhia, yet allknowing nonetheless.

As a young child, Japanese Maple was all about nature, making it her all in life and cherishing every single living thing, as she’s meant to according to her belief. She kept a small flower garden behind a saloon door in her room, talking to her plants once in awhile while watering them.

Of course, it wasn’t just her and her plants for her entire dragonhood, and she made a friend at the coral shop underwater called Baleen, Bailey for short. They began to hang out, making up their own tribes and creating otherworldly places and ideas, like shapeshifting and being polar bears wandering the tundra (in the winter).

When they were put in school, Bailey was going to the same one as her, acting even crazier at school then at play dates. It was fine with Japan, enjoying her friend’s outgoing personality.

As she progressed throughout the year, her grades were mostly average, but she especially loved art, drawing, and creating new things as well as painting. She mostly painted pictures of her and Bailey as different animals, such as foxes galloping across the night sky and them as horses, free on the plains.

Every recess, the two friends would go out and play together, pretending to be shapeshifters and becoming a new animal every time they helped the group of animals they’d become. Once they raised kittens on a mountain as snow leopards, caused a riot as owls, and brought peace to the warriors as cats.

As summer arrived, it was harder and harder to ignore her mother and father arguing constantly, yelling at each other, and listening to the doors slam all the time. Often, she was stuck in the only quiet place in the house, which was her garden, where she’d go and talk to her plants.

On summer break, Bailey was going away to see the Rain Kingdom where she’d stay in one of the current Queen’s hotels for foreign dragons, so Japanese Maple had nobody to hang out with for two whole moons. This was very sad to her, having no other friends.

Her parents decided to set her up for a camp about plants and trees and learning to survive by themselves called Nature Camp. Japanese Maple hated the idea of this but had to go nonetheless, since maybe she would make new friends.

When Japan got there, she was surprised. There were hardly any dragonets, and the instructors were giddy with excitement, kind and nobody was seeming aloof at all, in Japan’s skepticals. Already she was feeling better about herself, happier and butterfly-less.

These two get each other. While Rainbow Eucalyptus is just slightly oblivious, Japan is crushing on her hard, though not obviously. 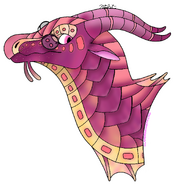 Line art by Glam, colouring by me! 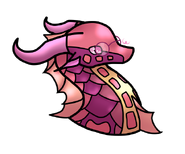 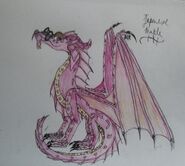 So cute thx Ani
Add a photo to this gallery
Retrieved from "https://wingsoffirefanon.fandom.com/wiki/Japanese_Maple?oldid=2247940"
Community content is available under CC-BY-SA unless otherwise noted.