"Bast-- This feeling, now that we're in school together, I think I love you."

Inferno is a SkyWing who attends Jade Mountain Academy in the Silver Winglet. He is clawmates with Bast the SandWing. Before he attended Jade Mountain, he lived in Sanctuary with Bast the SandWing as his neighbor. They became close friends and in their application to go to Jade Mountain, they specially requested to be in the same winglet. After being in school together, Bast and Inferno realized their love for each other, however, their relationship is very light-hearted and casual.

Inferno is kind and understanding but has trouble putting his thoughts into words. He understands miscommunication and is empathetic to those who have his same problem. He mainly thinks in feelings, pictures, and concepts. He likes to draw pictures of things he has seen; like plants, animals, even his friends. He hates being judged and especially hates hypocrisy. He can be shy at times.

Inferno is a fiery red with orange wing membranes and orange underscales. He is tall and muscular. He would be intimidating, if not for his kind, amber eyes.

Bast: Bast is his true love. They truly understand each other, and help each other be their best selves. Despite this, their relationship is very lighthearted.

Egret (PomegranateTheRainWing854) They both have the same worst fear: judgement. They bond over this.

Cleverness: Cleverness and him bond because of Cleverness judging and making fun of himself. It helps Inferno see that not everyone else is perfect. In addition, being a mind reader really helps Cleverness understand him.

The rest of the Silver Winglet: He tries to be understood by them, but mostly, he just kind of is in the same place as  them. 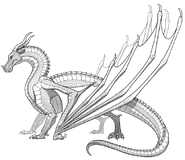 A typical SkyWing by Joy Ang 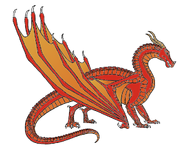 Ref by me
Add a photo to this gallery

Retrieved from "https://wingsoffirefanon.fandom.com/wiki/Inferno_(PomegranateTheRainWing854)?oldid=2048696"
Community content is available under CC-BY-SA unless otherwise noted.