Imagine is Pinktiger2107's OC for the randomly generated color contest. No using anything on this page without permission. Comments and critique are always appreciated.

Imagine, like most SilkWings, is a very beautiful dragon. Her main scales are violet, and her top scales are a darker shade. Her underbelly is a very light lavender. Her horns and snout fade into a purple-blue color and the spots on her main scales are the same color. Her spikes are a rather dark shade of purple. Her wing membranes are also mainly violet. They start out a dark violet, similar to the color of her spikes, near the fingers of the wing, but get lighter the closer they get to the edge, ending in the same shade as her underbelly. Gold is speckled around her eyes and her snout, and hints of it shine under her scales in the sunlight. Her eyes are the same shade of gold, and her small, sharp teeth and claws are pure white.

Her face is sharp and defined, but the rest of her body is more round and curved. She has a bigger head and bigger eyes, and she is quite small, making her look a lot younger than she is. Not one scale on her is chipped or crooked and all of them shine like gems. She can usually be found with a distant and spaced out facial expression, not paying attention to her surroundings.

Imagine is a dragon who never truly grew up. She's always dreaming, always imagining something big and new and exciting to escape life. She's always going on about the hundreds of stories and worlds in her head and will tell them to anyone who listens. She's bubbly and excitable, always looking forward to something. She is rather naive, and oblivious to the horrible way SilkWings are treated by the HiveWings, and how most generally veiw her. She thinks life in the hives is perfectly fine, if not a little dull. When she's not thinking or weaving, she's laughing and joking with a group of friends. She's pretty ditzy and forgetful, and she always complains about not knowing things that were usually explained right in front of her. She loves a good joke is pretty funny. She's quick to fall in love and, before she was paired, had a new crush every other week, one or two of them even being HiveWings. She's not very responsible and is almost never up to demand on her silk weavings. She's normally quite polite, at least when she's listening. She's empathetic, understanding and humble, and most dragons enjoy her when they look past her childish exterior.

Imagine is... not the best fighter. In fact, she's disgusted by the very fact that dragons would hurt each other in the first place. In the very few moments she might have too, she usually refuses to fight, so she hasn't had much practice. Even if she had, she's even less built for fighting than most SilkWings. She's slow and quite clumsy, not very good with any weapons.

Imagine's care-free and dreamy personality is generally looked down upon by dragons who don't know her well. They think she's lazy and purposely neglecting her duties as a weaver, which is simply not the case, she's just forgetful. People who do manage to get to know her generally enjoy her company, as she's polite and dragons, ecspecially young ones, find her stories fascinating. She's not very good at the other end of the friendship, actually listening. The dragon she's listening to says something even slightly interesting and her brain goes on a spiral of fantasies, making up possible stories and remembering something she was told earlier that was funny, and then forgets to listen to anything else and when she's done has no idea what anyone's saying anymore.

Even though she's not good at staying on demand, Imagine makes beautiful silk weavings that are generally very liked among both HiveWings and SilkWings. She's able to think up magical and beautiful things to weave, ranging from simplistic to carefully detailed. She gets a lot of requests, only about half of them actually completed. She hasn't made anything for anyone important yet, but she dreams of doing so.

by Willowdolphin64!! Thank you so much!! 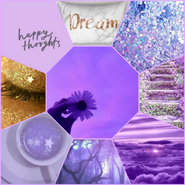 Beautiful aesthetic by MKDragonet!
Add a photo to this gallery
Retrieved from "https://wingsoffirefanon.fandom.com/wiki/Imagine?oldid=1631748"
Community content is available under CC-BY-SA unless otherwise noted.