Sticks (A dragon, not the tree kind)

Fish, being in populated places

Flamesilk, heavy wings that can knock someone out, but she cant fly.

"What kind of SANE DRAGON would sit under a WATERFALL?!"

This character belongs to PumpkinThePumpkin! Do not use unless granted permission!

Hydra has two wings and deep rose scales, her horns are curved inwards like a sheep. She inherited antennae from her father and the body of her mother. Her large heavy wings are too much to fly with, so she can only hop.

Hydra, unlike her brother Fig, is extroverted, she likes making friends and enjoys publicized areas. She is a lot more strong-minded than Fig and makes friends most every day.

Hydra's history is interesting. Her Silkwing found his way to her mother, and had eggs. They lost Hydra when the Sandwing Succesion was a few years before end. The other eggs were raised in the rainforest, but Hydra hatched alone. She knew nothing of her heritage and grew up responsibly. Once she was 4 a Sandwing named Sphinx found her and brought her to her long lost brother Fig.

What about the wings?

'How does she get around?' you might ask, she gets around by running, on land, but if she has to fly she might bring a dragon to help her wings stay afloat. The wings are caused by the Silkwing genes, Silkwings have 4 wings, but her wing shape was that of a Mudwing and the 4 wings merged into 2, forming gigantic heavy wings. I wonder where she is now...

Hydra huffed at the dragon she followed, "Why in the three moons would any dragon go near a WATERFALL?!" she protested. The dragon only laughed, and brought Hydra over to it, "Now, go fish." Hydra grumbled but did as she was asked. She brought back a few fish, shaking from fear that the waterwall almost swallowed her. She tried a piece and- "It's delicious!". "See?" the other dragon ate her own, "Waterfalls aren't all that scary." 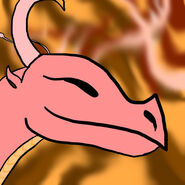 full body by WindFaith (THANKS!)
Add a photo to this gallery
Retrieved from "https://wingsoffirefanon.fandom.com/wiki/Hydra_(PumpkinThePumpkin)?oldid=1621459"
Community content is available under CC-BY-SA unless otherwise noted.