This character belongs to Pokeball. Base code by Element. Coding from https://heliosanctus.fandom.com. Slight edits by me.

Grima is a hybrid of all (canon) tribes created by the SkyWing scientist Forneus. Forneus was careful giving Grima divine dragon blood, causing Grima to be superior. Grima is the true antagonist of Awakening who is attempting to take over the world of dragons and kill every dragon, making he and his army rule superior. Before his name was Grima, his name was just "Creation". 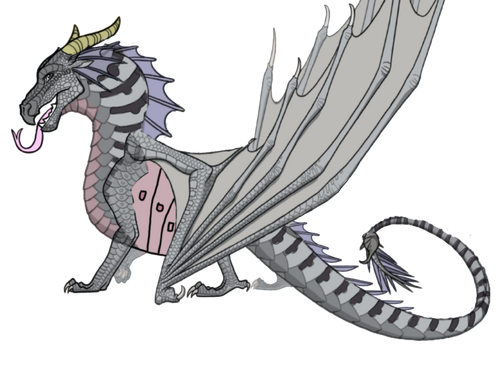 Grima is a hybrid of all tribes. He has MudWing horns, SeaWing underbelly, RainWing ears and ruff, NightWing head, a SandWing barb, an IceWing tail combined with the barb, SkyWing wings, SilkWing feet, HiveWing stripe patterns, and LeafWing spikes.

Grima is shown to be very brutal and violent, certainly to scavengers and weaker dragons. Wanting to kill them all, he is usually very keen on his plans.

A couple thousand years ago, there was a SkyWing scientist named Forneus who fell in love with a NightWing. However, sometime later, the NightWing died for an unknown reason, causing Forneus to go into a rampage. He created Grima, although he just called it "Creation", but took it way to far. He took a great risk using Divine Dragon blood to make Creation his ultimate creation, and he called it Grima. To make Grima, Forneus in total used herbs, nectar, scavenger and dragon fluids, animus magic, animus genes from Forneus's own blood, and Divine Dragon blood that sealed inside a concotion for 40 days, and Grima was born.

Grima has the abilities of every single tribe in Pyrrhia and Pantala, causing Grima to be a Mary Sue. He is so giant that whenever he roars, it is most likely to break hundreds of scavengers' eardrums at once if they are nearby. Thanks to the animus genes and animus magic he was given by Forneus, Grima also uses animus magic. In the past, he used animus magic too much, causing him to go even more psycho and power hungry.

Hackberry: He doesn't truly appreciate her. Why? Because she's weak to him. He believes that there can be much better dragons unless if she proves herself worthy.

Icana the ice/rain hybrid: He's not sure. Is she worthy?

Grima from Fire Emblem, which (this) Grima is based off of 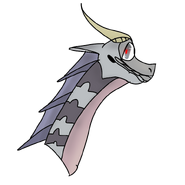 By Sunset!
Add a photo to this gallery
Retrieved from "https://wingsoffirefanon.fandom.com/wiki/Grima?oldid=2045212"
Community content is available under CC-BY-SA unless otherwise noted.