students at her former school

Gracieux is a thin, elegant TempestWing with long spines, slightly twisted horns, and piercing blue eyes. The first word that comes to mind when she walks into the room is graceful. She has solid colored wings from distant hybrid ancestry, and her wing membranes are slightly odd. She has a thin scar on one wing, but it looks natural like a stripe. Her scales are dark purple-red, contrasting her eyes. Her talons fade into black, with a small scar from when she was learning how to figure skate. Her spines and underbelly are black.

Gracieux, or Grace as her friends call her, is complex. She can be calm and trusting with one person, then turn around to say some snappy comment to a dragon getting on her nerves. She is usually friendly, but if she's having a bad day she can be hostile. She is known throughout the town as a very stubborn dragonet with a bright future ahead in figure skating. Her determination is s large part of how she has gotten in her sport. She is sometimes called anti-social or negative, but she's really a social dragon.

Gracieux has no Storm Sense or Spark powers, but she can still charge electricity. She is usually pretty charged up, but when she is training for a competition she will sometimes neglect to recharge.

She is smart, clever, and calculating. She uses her senses to observe her surroundings and she can also manage to be a few steps ahead of many dragons. She has an ability to know what a dragon will say next by watching their reactions and body language.

Grace is a good figure skater, who also knows how to turn her graceful spins and twirls into powerful kicks and punches. She can be out in the ice for hours on end and never get tired (if she is fully or mostly charged).

Gracieux was born to a 1/4 SkyWing 3/4 TempestWing father, Flameshatter, and a full TempestWing mother, Rain Song. She was born in Skybreak. She got her love of the cold from growing up on the snowy peaks. One winter, when she was only 2, was so harsh that most prey died in the relentless blizzards. Rain Song died of starvation. Soon after, Flameshatter went off into a blizzard and was never seen again.

Gracieux stayed in the town, sleeping on the streets and surviving off of the food that the citizens of the town gave her. One day not long after her father's disappearance, she found a frozen pond. She stepped out onto the ice and fell in love. She began to twirl across the smooth ice. Dragons who passed stopped to watch. This dragonet was only two, yet her raw talent was remarkable. For many days she danced on the ice, swirling, spinning, leaping, and twirling. One dragon, Crowcall, was going to Saltwind and offered to take Gracieux with her. Then the next chapter of her life begun.

Crowcall was kind, but raising a dragonet was not an easy task for the 10 year old. The teen got a place for the two of them to stay, and Grace was entered in school. She got good grades, but the students were cruel to her. They called her a lowlife, a hopeless orphan, a useless wretch. She hated school so much that she begged CC to pull her out. The black dragon complied, and Gracieux's life became a little bit better. In the daytime CC was off selling freshly baked breads and desserts, so Gracieux had plenty of time to explore the town. She found an icy lake and began to dance. Her talons eagerly walked her through the old spins and leaps, her wings drifted elegantly through the air as she twirled across the ice. Once again, dragons came to watch.

Soon dragons would toss bone chips and gems onto the ice. One dragon in particular would always pay attention to her on the ice. An IceWing named Moir would comment on her moves, and his advice helped her keep improving. She got better every day, and with the help of Moir she was soon one of the best skaters in the tribe. She practiced during the day while Crowcall was at work, and she spent the evenings with her guardian and adopted mother.

One day as she was practicing, she met a SandWing named Kostomarov. He had drums from the desert, and his voice was stunning. He made music for her to dance to. Her skating got even better. Her graceful swirls matched perfectly with his songs. Then, to challenge her, he sung faster songs. She danced to them, rapidly leaping and twirling. Every so often he would switch up the tempo, and she would change the style of her skating.

Then, when she was five years old, one of CC's customers was angry that he had found traces of dragonbite viper venom in his bread. Crowcall promised that it was a mistake, but the grumpy SkyWing refused to back down. He shot a burst of flame at CC, stabbing her before running away. Outraged, Gracieux slashed the attcker's snout as he was running away. The SkyWing was caught and put in prison, and Crowcall was sent to the hospital, where her burns and stab wounds got better.

Shortly after CC got out of the hospital, the group moved to a city on the eastern coast of Pyrrhia named Stonewell. Crowcall got a fresh start, and everyone fit it great with the town. Since it was warmer there, there wasn't much ice, but Gracie quickly adapted her skating moves into dance moves, and dancing became her new performance style.

Daily life became better for Gracieux after that. She skated by day and spent time with her adopted family at night. Moir became alomost like a father, Kostsomarov was a brother, and Crowcall was her mother. She was happy. And she truly belonged.

"My family is different. But they aren't weird. And anyways, who gave you permission to judge me?"

"You think I really care if you think I'm weird? "

"If I'm anything, I'm determined. Some might even call me stubborn." 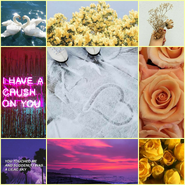 Aesthetic by MKDragonet
Add a photo to this gallery
Retrieved from "https://wingsoffirefanon.fandom.com/wiki/Gracieux?oldid=1845018"
Community content is available under CC-BY-SA unless otherwise noted.