Start a Wiki
image used in the coding is free-to-use, but credit to bady qb (photographer)

this character was made by wings-of-bloodfire. do not tamper with the page.

G r a c e w e a v e r
Although born as the second daughter of Queen Stormcaller, Graceweaver ascended the throne when her older sister, Rainspinner, opted to become the governor instead after their mother's murder. The young queen was betrothed to Blazecaster, son of a noble and elite DriftWing family, and became mother to his dragonets -- enough heirs to keep the kingdom running for a long while. However, it became apparent that her mate was not faithful, sneaking off to see a palace handmaiden named Nightpaver. The handmaiden was never heard from again, and many of Graceweaver's subjects suspected that she had her killed or exiled to keep her mate in line.

Queen Graceweaver is a large DriftWing, even by her tribe standards. She is taller than her older sister and possesses a “no-nonsense” aura. Her wings are large to accommodate her sheer size, although they are long and somewhat narrow like any other DriftWing. The queen has short, blunt claws and an impressively long tail. Graceweaver does have an elegant aspect to her, hence her name. She is very pretty and she uses it to her advantage.

She has pale gray, almost silvery scales with darker gray topscales. She has a black mottled spot pattern: the traditional DriftWing royal face markings and eye-to-snout stripe. The queen’s underscales and horns are as white as fresh snow. Her eyes are a bright aqua and glitter like jewels. Her sail, wings, and tail-fin are a greenish-aqua with a pale green stripe. She has teal fur behind her legs.

The DriftWing has a purple tattoo on her right shoulder that signifies her position as queen.

Graceweaver, being the queen, wears an expensive collection of jewelry and attire. She doesn't usually wear a crown, preferring to wear a draping "headdress" that consists of one large pearl that rests on her forehead accompanied by dark strings of black and white pearls. She also likes to wear poofy boa-like scarves and the occasional black vest. She isn't a big fan of wearing gold, preferring to use gold for money instead of turning it into jewelry. She also has a collection of tail rings, and likes wearing bracelets. She almost always wears some sort of earring.

The DriftWing queen could be described as sassy, self-confident, full of herself, or stuck-up. She appears that way to onlookers, although dragons close to her know better. Graceweaver can’t help it; she was raised as a self-critic and strived for perfection every day.

Graceweaver is not stupid like Blaze. She may be concerned with being the perfect queen, the perfect mother, and the perfect wife, but she does rule soundly. She struggles to find the perfect balance between raising her family and running her kingdom alongside her sister.

She can be surprisingly cold and heartless, especially when it comes to protecting those she cares about or her legacy. Graceweaver is fiercely protective of her dragonets and would not hesitate to break her moral compass for their sakes. When she found out about Blazecaster’s wandering eye, she scared him into submission. The female DriftWing rival was never seen or heard from again, and many suspected their queen killed her.

Firebreath
Queen Graceweaver can breathe fire. Like all DriftWings, her fire changes color with her environment. She hardly uses her firebreath since she doesn’t need to fight. It’s also frowned upon for a queen to start a fight or use any sort of weapon.

Heightened Hearing
Graceweaver has a heightened sense of hearing, greater than that of scavengers and most other dragon tribes, only beat by SwiftWings. Her kids have learned that they cannot keep secrets from their mother.

Tucking
She can tuck her body in a ball, her back fin jutting out as a "shield" of some sort. Her wings can curl around her sides to protect herself.

Graceweaver was born to Queen Stormcaller and King Cliffbender (though deceased) of the DriftWings. She was the secondborn female heir--the first being her older sister Rainspinner. The two perfect princesses were signs of prosperity and beauty to their subjects.

Everything turned for the worst when Stormcaller was found dead in her chambers. It was later discovered that she had been poisoned. Everyone was in frantics. With no father since birth, the two daughters felt fear settle in. They were orphans.

It was decided that Rainspinner would be the new queen, since she was the eldest sister. This caused some unhappy muttering among citizens, as Rainspinner wasn’t elected the traditional way. She was not very old when she ascended the throne, and did not rule very long. When the governor retired, Rainspinner jumped at the opportunity, opting to be governor instead. Graceweaver became the queen with her sister as the governor.

However, when Stormcaller was still alive, she had made arrangements for the Cinder noble family’s son, Blazecaster, to marry Rainspinner. The eldest daughter refused when she became governor, and the two worked out an arrangement. Blazecaster would marry Graceweaver, the to-be queen, instead.

One time while hunting, the second princess stumbled upon a NightWing trespassing in DriftWing land. Instead of turning him in, she opted to be friends instead. See, Grace did not have a lot of friends due to be isolated a majority of the time. The NightWing took her offer, and the two became friends.

The two grew up, meeting each other occasionally to play and just chill. Grace wanted someone to vent to, and this NightWing was the perfect source. Eventually, the second princess fell for him.

Unfortunately for her, she had agreed with her sister to marry Blazecaster of the Cinder family. She wouldn't go back on her promise, especially not for her beloved sister's happiness. Graceweaver brought her sister with her to one of her hangouts, and the NightWing, Rivereyes, became smitten with Rainspinner.

The princess (soon-to-be-queen) became officially betrothed to Blazecaster a while later. She didn't love him; he was sleazy and not very nice. His arrogance and scorn irritated her, and she wished for the days with Rivereyes. Graceweaver was set off when word spread about her fiancee having an affair with a seamstress. She quickly sent the seamstress to execution. She did not know about their invalid egg together; Blaze quickly dumped his egg on the streets before his betrothed could find it. He knew in her state, she would most likely smash it.

After the incident, Blazecaster was kept under careful watch. She was crowned Queen of the DriftWings, and her official marriage was a week later. The ceremony went smoothly; no one objected their marriage (although Rainspinner did not look pleased about the king’s earlier behavior).

Over the years, he became cold and disinterested in his wife and offspring and often disappears for long periods of time. The queen busies herself with paperwork and running the kingdom to forget about her family issues. She tries to be a good mother to her kids, especially since they are practically fatherless. Blazecaster was not very prominent in their childhood.

Graceweaver is grooming her eldest son, Stormcaster (named after her mother and Blazecaster), to be the next DriftWing king. 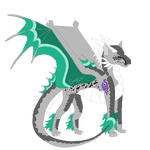 copperwingz
Retrieved from "https://wingsoffirefanon.fandom.com/wiki/Graceweaver?oldid=2147133"
Community content is available under CC-BY-SA unless otherwise noted.