this character belongs to PomegranateTheRainWing854

The fact that time passes

"Gaining answers only opens up new questions, an infinite spiral. Or, should I say, a fractal. Oh, moons, POMEGRANATE, YOUR PUNS ARE CONTAGIOUS!"

Fractal is an IceWing who attends Jade Mountain Academy in the Silver Winglet. She is friends with Pomegranate the RainWing and has a girlfriend named Dolphin the SeaWing. Before she attended Jade Mountain, she was a pretty much normal IceWing living a three-hour flight away from the Great Ice Cliff. She was constantly craving knowledge and information, and went exploring so often that eventually asking her parents became nothing more than a formality. Once she went to Jade Mountain and became in a relationship with Dolphin, she asked for a five-day leave to get a moon globe for her love as a present.

Fractal is constantly craving knowledge and studying any unknown she can find. She is incredibly patient and focused once there is something she decides she wants to know, because then she will know it, regardless of how long it takes her, and nothing will distract her. She is easily distracted if she is not investigating something and she finds something to investigate. There is no greater satisfaction for her than finding an answer to a question that took her a particularly long time. She is calm an collected.

She is a pale, light blue with light grey underscales and silver wing membranes. Her icicle horns stick more upward than the typical IceWing, like hair affected by static electricity. She has larger than average wings and a more flexible than average neck. Her body is muscular and compact.

Dolphin: Dolphin is her girlfriend. They study and investigate questions together. They sometimes make riddles for each other to answer.

Pomegranate: Fractal, Dolphin, and Pomegranate are kind of in a "gang" together. It is not a polymorus relationship, despite them all being females attracted ot females. It manages to be surprisingly not-awkward. Pomegranate and Fractal sometimes talk about philisophical ideas as well.

A typical IceWing by Joy Ang 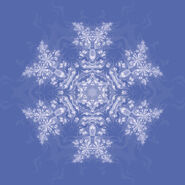 A fractal snowflake which is where her name originated 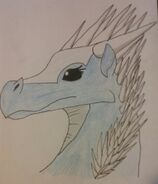 By Aryafire, Thank you so much!

Flight Rising by Sierra sakura! Thank you it looks so epic!
Add a photo to this gallery
Retrieved from "https://wingsoffirefanon.fandom.com/wiki/Fractal?oldid=2237900"
Community content is available under CC-BY-SA unless otherwise noted.