please do not edit the page unless told so! belongs to sorapaw! 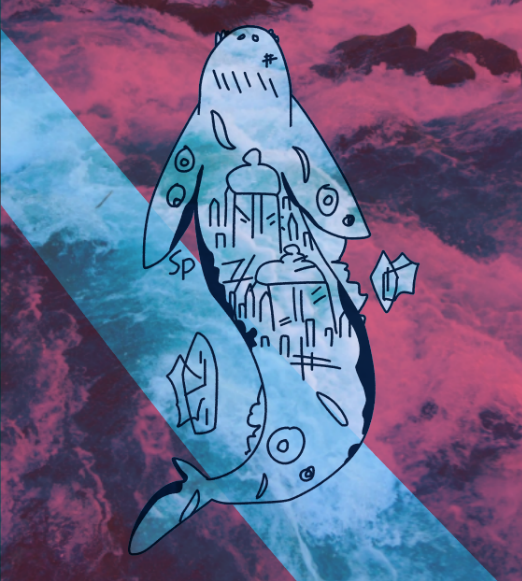 A TOWN/AUish thing BY SORAPAW!!!!!!!!!! no touch pls. you can have an OC here but they have to fit within the guidelines (unless they are an outsider who has moved here). make sure to ask me before making!!!

The town is set upon a layer of caked dirt and sand that ended up on Finnerbreak's back. The houses are giant, 300 ft. tall, blue and white towers. There are many rooms within these large house-towers that the Finners live in. The streets are lined with flowers and plants, and there are many agricultural fields where the houses are not. Sailors in ships sail alongside Finnerbreak, sometimes leaving to get supplies and returning to the great whale.

Almost everyone within Finnerbreak is a MudWing mutt. They are thinner than usual MudWings, and typically taller than them as well. They can have ridges, ruffs, or normal back-scales. They usually have a brown or purple color, but there are also have yellow, green, or pink scales. The only exception for this is outsiders, those who land on Finnerbreak and choose to stay. About 1/2 of the population has wings, as Finners do not typically need them as they travel bipedally more. Many Finners also wear more clothing than the typical Pyrrhian or Pantalan.

Lady Mirror - The "Queen". She has a special connection to Finnerbreak and can speak with him. She is a dark purple Finner with pale blue and red triangular markings. Wears a dark red cape and light green dress.

Sir Caantine - The royal advisor to Lady Mirror. He is a light green Finner with dark red-brown dots and a SandWing ruff. Wears a chain-mail suit of armor made from tough fish scales.

Madam Laurel - The lead Sailor. She is a dark green Finner with orange-yellow swirly patterns. Wears a black and pale blue sweater and carries a giant fish hook everywhere.

Nell - The Lady-in-waiting after the recent Trials of Speech, a dark purple-brown Finner with no wings, a SwiftWing mane on her tail and head that is platinum and mint colored, strawberry-lensed glasses, and a pale yellow shirt with several gay badges and a cacti badge.

Jay - A SeaWing mutt with purple/light blue scales, SeaWing fins, jade-colored eyes, and one wing. This Finner likes to wear aesthetically pleasing t-shirts, and has piercings on her horns. She runs a local and small Candy Factory and likes to do charcoal paintings.

Alabaster - A Mud/Sea/Rain hybrid Finner who comes from an extremely wealthy household. She has the body of a MudWing and the elegant, sloping head of a RainWing, as well as RainWing frills. Her scales seem to shimmer and shine like glass, due to treatments that she uses on her scales. She loves flowers and came to Finnerbreak hoping to live like a god. She currently owns a well-doing shop.

Flora - A wingless, Mud/Rain, chubby Finner who's scales are amber hued with hints of silver, periwinkle, and blush rose. This Finner is slightly rebellious and a constant party animal. She loves the sea and is a gardener. She loves dancing, having fun, and someday she wants to settle down with someone.

Gruff - A male Mud/HiveWing Finner with a slightly chunky, MudWing-ish build. He is wingless, docile, easygoing, and can be kind of edgy sometimes. He has HiveWing stripes and enjoys gardening, fishing, and doesn't have many friends. This Finner is currently single as well.

Marie - A female Finner with pale brown scales and dark yellow/tea green markings. She has large, white wings, and is a high-class Sailor. She is extremely talented and is said to become the next Sailing Leader. Socket is her husband.

Socket - A male SandWing/RainWing mutt with bright yellows, teals, and oranges as colors. This Finner is a farmer who usually wears a light grey-blue sweater and lots of red and blue socks. He's very silly, has lots of friends, and has the ability to grow some of the best produce in Finnerbreak. Marie is his wife, and Tallkin is his brother.

Unmei - A rebellious Finner who is a street artist. She is a fullblood TempestWing and has both of her wings. She is grumpy, sneering, and quiet. She doesn't interact much with other Finners and has a slight hatred for Nell, Socket, and the others.

Sunna - A plant witch who left Finnerbreak on a boat made of bones after fighting Nell. She is pale magenta-brown with many bright yellow markings, and a HiveWing ridge. She has teal wings and wears a dark witch hat as well as a beautiful flower crown. She also sometimes is seen in a dark blue hood.

Tallkin - Sunna's boyfriend who left on the boat with her and died on the trip. He was a dark blue Finner who wore silver jewelry and a black hood. He was also Socket's younger brother.

Finnerbreak was founded a hundred years after Darkstalker was sealed underground by Clearsight. It is said that all of the animus magic in the area opened a rift within the animal Deities of Pyrrhia, who sent down one of their half-gods, the Demigod of Creatures of Snow. From the rift fell Finnerbreak, who is said to have resembled an Ice/MudWing hybrid.

Several MudWing war prisoners (to the SeaWings) were sent to investigate when the SeaWings spotted the giant whale. But they never returned, and these dragons became the first generation of settlers. One of the MudWings, a female, found herself to have a special connection to Finnerbreak, and so the term "Lady" was established.

The settlers decided to name the town Finnerbreak, after the whale in which it was set upon. They called themselves the Finners. Over time, they expanded and created ships from the blue driftwood. The barnacles on Finnerbreak's back spouted seeds, which the Finners planted to create plants and food. Fishers sat upon his back and swooped into the water when they spotted a fish.

Over time, more and more dragons, both Pantalans and Pyrrhians, started to crash onto Finnerbreak's huge back, creating the mutt-dragons that can be seen today, even if most of the population resemble MudWings.

They began to create clothing and walked bipedally every once in a while, and began to lose their wings over time. They established five groups, The Royals, who lead the other three smaller groups, as well as the main leaders, The Fishers, The Farmers, and The Sailors, as well as the Townsmen, who had more obscure jobs, like teachers and weavers. The Townsmen currently do not have a leader, as they have more than one specific job in their reign.

As of now, most Finners prefer to wear a certain level of clothing. They have huge, blue, wooden towers that have many rooms that are rented to individuals and families. They have many beautiful plants and streets made from large stone-like barnacles growing on Finnerbreak's back. They have blue docks and ships along Finnerbreak's body as well.

The Five Groups have stayed nearly the same, with a few changes being made to allow for a few more Royals. There is also a chance that the "Lady" will be a male, called the "Guard", but most are female.

Finnerbreak has also gotten older, but does not show any sign of being close to death at all. The current Lady, Lady Mirror, says that Finnerbreak believes he is only a fourth done with his mortal life, even after thousands of years already.

As of now, a future Lady has been selected, the maid/student Nell. After completing the Trials of Speech (see below), it was determined that she can speak with Finnerbeak naturally. There have also been a few exiles, such as the exile of Sunna and Tallkin.

The current Lady will stand next to one of the currently age 6 dragonets and the dragonet will try and speak with Finnerbreak. When one does, the Lady will be able to hear Finnerbreak's response as well, which will confirm the newest Lady or Guard who will take the current Lady's place when she passes (or when Finnerbreak requests a new Lady).

The top of the Pyramid is the Royals, the Lady in particular holding all power (below Finnerbreak himself, of course).

The Fishers are the second most important, and then The Sailors. After that, The Farmers, and The Townsmen.

Thank you for reading through the page!! Remember to please contact Sorapaw if you wish to make a character who lives in Finnerbreak!

Retrieved from "https://wingsoffirefanon.fandom.com/wiki/Finnerbreak?oldid=2070023"
Community content is available under CC-BY-SA unless otherwise noted.