Start a Wiki
This cute Alan Walker fangirl is the main sona of LunaTFoxy. Other ppl stay away. If you use her without Luna's permission, then GET READY to BE DELETED by CHARA! Or get nuked. It doesn't matter.SPECIAL THANKS TO MY NAMSAKE LUNA-THE-NIGHTWING THIS FOR THIS AWESOME CODING!

~eternal silence of the sea

Fadedwalker, or Fade, is a female NightWing-RainWing hybrid. She is the main sona of Whajje on Deviantart (LunaTFoxy). The picture name is missing a d.

She belongs to the Aquamarine Winglet in Jade Mountain Academy.

She is the Protagonist of Faded.

Fade is mainly purple and black. She has 2 NightWing horns, 2 RainWing horns and a RainWing ruff, much like how Espeon has 4 ears, although she does not have a split tail like the Espeon. She has silver NightWing scales on her black under wings like scattered stars.

In her spectral form though...she is the same color all over: pale transparent lilac. Even her pupils are gone.

Don't remind me,
I'm a chickadee in love with the sky.
But that's clearly not a lot to crow about.
'Cause when the stars silhouette me,
I'm scared they'll forget me and flicker out.

Fade belongs to the Aquamarine Winglet in Jade Mountain Academy along with her half-sister Brightness and her boyfriend Superultra.

Brightness prefers to sleep on the moss bed.

So Fade has the the RainWing hammock. She likes it pretty much.

Flamethrower the SkyWing is the bad-tempered battle training teacher.

~Under the bright but faded night

You set my heart on fire

~Where are you now?

Where are you now...

Her mother is a Rainwing named Rainer.

Her half-sister is Brightness the Sand/Night dragon.

She is best friends with Firefly Night, the 8th student of the Aquamarine Winglet.

She is currently in love with Superultra, a LeafWing-RainWing hybrid and the RainWing of Aquamarine Winglet.

Fade is very shy to outsiders compared to other dragons. She also has terrible stage fright, getting the jitters every time she performed. She changed the word "fight or flight" to "flight or fade", meaning both her name and her shyness.

But when her friends are threatened by powerful foes, Fade would do anything to save them, except for fighting though... Fade just uses her other form to distract the attackers away, for they do no harm to her. She tries the best she can.

She was born under 1 full moon, but because she is a hybrid, she has 2 powers.

She could see the future, but her visions were only 50% correct. At night, however, her visions became 75% correct, then resets to 50% when dawn rises. But her visions almost (never) come to her, so she pretends she doesn't have them.

Fade's second power belongs to her RainWing side: turning into a transparent pale lilac spirit "Spectral Fade". She uses her second ability way more than her first one, hence she often hides away.

Spectral Fade can see and talk to ghosts and spirits. But no normal dragon could hear her talk.

When Fade gets stressed, she almost always gets "The Jitters", where parts of her flicker between Spectral form and normal form. The jitters last for a few minutes, and nobody notices them because they don't care.

Fade is currently in love with Superultra. Although Waverly and Swiftlet love to make rhymes about them, Fade doesn't mind it all. She is ready to do anything for him.

Fade and Firefly Night are best friends forever. They hatched on the same cliff in the same nest, but Firefly hatched one year early. They study together.

Fade and Dreaming are good friends.

Fade thinks that her half-sister is overprotective, but she likes her.

Fade is aware of the SkyWing.

Fade is concerned about Firefly and Sine's relationship. She is worried that Firefly might not keep up with Sine because she has very very very bad math.

Fade thinks that Waverly is annoying. 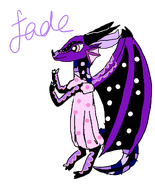 Fade as a human by Luna in GL. 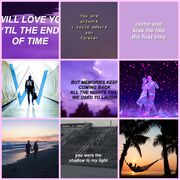 Fade and Superultra aesthetic by Wolves.

First ever FR ref by User: QueenPeril My Queen! Version 1. 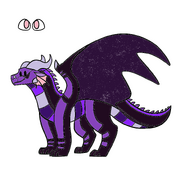 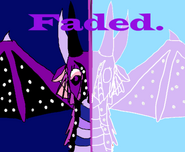 Fade on the cover of Faded, her two forms split in the middle
Add a photo to this gallery
Retrieved from "https://wingsoffirefanon.fandom.com/wiki/Fadedwalker?oldid=2150379"
Community content is available under CC-BY-SA unless otherwise noted.