this character belonged to Pom, but now belongs to NHickey26 on DeviantArt. You can find Pom's coding format here.

Dolphin is a SeaWing who attends Jade Mountain in the Silver Winglet. She is friends with Pomegranate the RainWing and has a girlfriend named Fractal the IceWing. Before she attended Jade Mountain, she was the daughter of a palace servant named Abyss. Abyss was a Pearl Gatherer for Queen Coral and allowed Dolphin to come with her while she was pearl gathering. One day while this was happening, Abyss was summoned to a meeting with the queen about something to do with jewelry, Dolphin couldn't hear the full summons because her aquatic skills were not very good at the time. Dolphin was not allowed to come and did not know the way back to the Deep Palace, so Abyss promised to be back for Dolphin in five hours or less, then left with the messenger. Dolphin was not good at hunting for fish and was hungry. She looked below her and saw kelp plants. Having seen other dragons around the Deep palace eating it occasionally, she reasoned that it was edible and swam down to try a piece. She tasted it, and it was wonderful in a way she had never before experienced. She began eating more and more and once Abyss came back for her she was sufficiently satisfied. she still ate fish, of course, but from then on kelp was a great snack for her.

Dolphin is rational, logical, and intelligent. She is amazing at solving riddles and is known for thinking that knowledge and learning comes first. She is not good at being social, and that is why she gets along with Pomegranate and Fractal. They bond over social awkwardness. Dolphin is more emotional than Fractal. ((The answer is "a scavenger"))

Her scales are a blueish-turquoise color with bright blue underscales and light turquoise light-up scales/membranes/webs. She wears a pearl bracelet on her left foreleg and a necklace with a pearl pendant with stripes on it. She has unusually large back spines. She is long and loosely built.

Fractal: Fractal is her girlfriend. They investigate and study together. Fractal sometimes makes riddles for Dolphin to answer, and vice versa.

Pomegranate:  Dolphin, Fractal, and Pomegranate are kind of in a "gang' together. It is not a polymorus relationship, despite them all being females attracted to females. Dolphin is amazed at how not-awkward it manages to be.

Creative: They kind of know each other through Pomegranate, but they're not what you would call friends.

The necklace that Dolphin wears by me 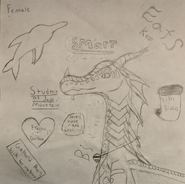 Cringy Headshot by me

A typical SeaWing by Joy Ang 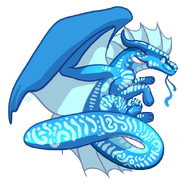 By Resa the Stormtrooper, thanks so much!!!!!!

Ref by me
Add a photo to this gallery
Retrieved from "https://wingsoffirefanon.fandom.com/wiki/Dolphin_(PomegranateTheRainWing854)?oldid=2237899"
Community content is available under CC-BY-SA unless otherwise noted.