This OC is the property of RandomWeirdoDragon! Do not steal, copy, or trace any aspect of this character or the art of them.

Deimos is a relatively compact dragon, with a muscular build and a whiplike tail. He has unusually sharp claws, and his scales are an extremely pale white color with the faintest hint of blue. His eyes are an intense teal color, and his underbelly is an even lighter shade of off-white. While his claws are a bit longer and sharper than normal, though only by a barely noticeable amount.

Unfortunately for his otherwise-flawless features, Deimos bears a set of three claw-like scars slashed across the left side of his face, from just above his eye down to just below his bottom lip. These scars have caused much of his upper lip to be gone completely, exposing his teeth and gums, and much of the area around his eye is damaged, making it a miracle he can still see out of it. He wears a roughly crafted metal mask to hide these disfiguring marks, which can make it increasingly difficult to tell what his emotions are. Additionally, Deimos has a scar slashed across his neck and another across his tail.

Deimos carries himself with a mixture of pride and menace, making him a difficult dragon to approach. After all, with his intimidating demeanor, and masked scowl, he’s hardly a friendly face. His fighter’s stance lets anyone attentive enough to know that he wouldn’t hesitate to attack if necessary, and he carries his head high with an air of anger and pride.

Deimos is an especially fierce opponent, a deadly enemy in battle, and a dragon that many would pay handsomely to have on their side. He’s a decent strategist, but he would rather be fighting in a battle than planning for one. This causes him to often act rashly, acting first, and flying into a rage when anyone dares to challenge him. He tends to be extremely closed off and doesn’t share much about himself to anyone. Unfortunately for him, this causes him to be quite the loner, apart from the few allies he hasn’t driven away yet.

Additionally, he isn’t exactly what one would call empathetic, preferring to ignore his own emotions and disregard those of others. He is trying to fix this, though it isn’t too high on his priorities list. The only reason he even bothers with it is that one of the only dragons he’s allowed himself to grow close to, Tidalwave, critiqued this habit.

Despite all of his flaws, Deimos does have a few redeeming qualities. While he can be temperamental, closed off, and cold, he can also be fiercely protective of the few dragons he cares for and would do anything to save them, including give his life.

Deimos was hatched and raised under the strict training regimen that the other IceWings went through. He was mocked for his family’s’ lower ranking, but he ignored it, quickly excelling through the circles. In a mock battle after reaching third place in the second circle, his sister was killed in an unfortunate accident. Unable to dodge her opponent’s blow in time, Icefloe died on the end of a spear. Deimos still struggles to remember what happened, how the dragonet had ended up bleeding and near death. He was dragged to the IceWing queen, covered in blood that was both his own and the dragonet’s, the left side of his face burning in pain where the dragonet had fought back and mauled his face and cut his neck. He was allowed to be patched up, though only barely, and was promptly banished from the kingdom. Not knowing what else to do, Deimos fled to hide in the town of Possibility, his barely patched wounds hindering his ability to see, let alone fly through the pain. He was found by a healer who was able to stitch it up, but it was too late to make the wounds have any resemblance of normality, and he was left with his disfiguring scars. He purchased a cheap mask from a nearby blacksmith to conceal the scar and hid at a nearby inn to recover. 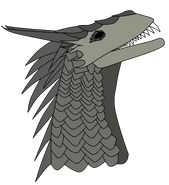 Old art by RWD
Add a photo to this gallery
Retrieved from "https://wingsoffirefanon.fandom.com/wiki/Deimos_(RWD)?oldid=2378454"
Community content is available under CC-BY-SA unless otherwise noted.