Dawn is quite pretty. But, she doesn't think so.

Dawnbreeze is a snowy white colour. Her spikes that run down her back are a shimmering gold. Her transitional scales area shocking yellow. Her ear is blueberry blue. The membranes of her wings are black, with light purple to dark purple markings. The underbelly of this dragoness is purple and blue, in a kind of fading/stripe pattern. She has a purplely pink marking running down the middle of her snout. She has hardly any muscle. She is small and meek. She is short, and not queenly.

Dawn has a history all twisted together, instead of tied together neatly.

Dawnbreeze started as a strange egg, she was very small and was white with purple stripes. When she hatched, everyone seen how she was tiny. Almost no one in her family respected or loved her. But, she loved and respected them. At 5, she started to leave her home to look out at the outdoors, she wore nice jewelry. She came upon a gang of rude, mean, cruel TempestWings. Their leader was a female, and wanted the jewelry of Dawnbreeze. So, they dueled with the poor defenseless dragonet. Marsh Fighter, their leader put in her favorite skateboard. Dawnbreeze didn't want to duel, but the group forced her. They forced her by blackmail. So, she put in her least favorite necklace, a silver chain with small emeralds hanging from it. Then the fight started. Dawn then realized she couldn't absorb enough electricity. She lost the duel. She came home beaten up, she could hardly walk. She also came home missing a necklace. But, she took a skateboard of lesser value to the gang. She tried going back to the outdoors again, this time she was 7. Also, she had trained hard. But, she was still weak. Dawnbreeze went to the forest this time. There she met Featherdust. They became friends. She always snuck out of her home to see Feather. When she would go to the forest she also made friends with the birds. On Featherdust's 10th birthday Dawn gave him the skateboard from years and years ago. He loved it. When they both got to 12, they started to go out into the towns together. Dawn always made Feather look like a spark because he is an Aviwing. So, Featherdust made her look like a TempestWing. Then,they would go out into public and pretend they are mates. They both love each other, but wont admit it. 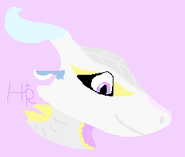 Dawnbreeze by Burgundy
Add a photo to this gallery
Retrieved from "https://wingsoffirefanon.fandom.com/wiki/Dawnbreeze?oldid=786371"
Community content is available under CC-BY-SA unless otherwise noted.