This page may contain profanity, violence, mild gore, or other forms of mature content.

Can insane dragons have goals?

Has a small electrical charge, but it's not as powerful as a normal Tempestwing, glow scales 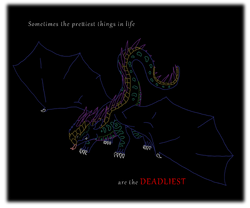 Current is a very unique hybrid. He has a dark, navy blue base color with aqua green Seawing glow scales with a dark purple underbelly. His green scales usually pulse dimly in the dark, making him look eeree. He also has a Tempestwing headcrest and spines, and his eyes are bright green. The headcrest and spinal scales are yellow orange, an odd trait that mysteriously appeared, with a green edging to them. His horns and spines gradate from purple at the base to a light red to the tips. The beautiful things in nature are most often the most dangerous...

Current is certainly a character. He is very homicidal, and has a hard time resisting killing everyone that breathes in his general direction. He tends to be smiling a lot, unnerving many dragons around him. He acts flamboyantly, and wildly gestures when he speaks, which pairs with the creepy smile. When he's quiet, his eyes seem to be piercing into your soul and deciding how to kill you.

During a terrible storm, a lost Seawing was blown north towards the Skywing kingdom. She swam along the coastline, hoping for some familiar coastline, but got none. Eventually, she found a land full of strange dragons she wasn't familiar with. Out of curiosity, she ventured out of the water and wandered into this new kingdom. There she found love: a Tempestwing with a big heart and a caring mind. She stayed in the newfound kingdom, and eventually with her eggs.

When Current hatched, his parents noticed something was off immediately. Instead of the wild, playful glint his brother's eyes had, there was a cold, hard steel in Current's. Growing up was a parent's nightmare. He screamed, he bit, he scratched, he fought, he bullied; even his older brothers were afraid of him. As soon as he turned 7, Current began to figure out how to discharge electricity like a Tempestwing can. Adding to the insanity he already created, he now shocked, stunned, and actually incapacitated other dragons by electrifying pressure points. Albeit his electricical release wasn't as strong or as controlled as normal Tempestwings, Current quickly picked up the best locations to electrify dragons.

The Tempestwing was standing where Current can overhear, talking about the amount of hybrids occuring recently. They wanted hybrids to leave the Tempestwing kingdom to make room for pureblood Tempestwings. Any normal hybrid would have just walked away or argued with them, but Current rocketed onto the dragon and ripped out their throat. He cut open the other dragon's throat as well, leaving their bodies where they lay. Of course, when the public heard about this, the kingdom went nuts. The queen ordered him to be jailed, and sent out a search party to capture the rogue hybrid. When they found him, he never hesitated on attacking the group head on. A 10-year-old dragon cannot take on a group of specially trained palace guards, however, Current somehow managed to kill one and maim another before he was subdued. He is currently jailed in the Tempestwing dungeon, and occasionally, if he can, attempts escape and tries to brutally take down the entire palace guard.

Retrieved from "https://wingsoffirefanon.fandom.com/wiki/Current?oldid=1403403"
Community content is available under CC-BY-SA unless otherwise noted.