- respect me this page is short
- at least for me

The Dutch rabbit, also known as Hollander or Brabander is easily identifiable by its characteristic colour pattern, and was once the most popular of all rabbit breeds. However, after dwarf rabbits were developed, the popularity of the Dutch rabbit dwindled.

Cuni is a NightWing, although she isn't an entirely normal one. She's unusually small and a little chubby, a very round, healthy looking dragonet.

Her scales are a slightly boring shade of black, although it seems to be healthy, somehow, a rich shade with little variation. Her underbelly is the same color, interestingly.

Except it isn't. On her stomach, between her front and back legs, there is a very sudden stripe of white. It goes across like a streak of paint, very sudden and pure.

Her wings are gray, a medium shade with a slight hue of blue. Speckles of white cover it, maybe a little large and spaced apart.

Cuni has brown eyes, almost greenish in shade. They're set large in her head, bright and curious.

Cuni is a sweet dragonet, kind. She's more innocent, too young or perhaps simply oblivious to all the problems in the world.

She's on the quiet side, although playful. She enjoys doing a little bit of jumping around, and seems to be extremely bouncy somehow, light on her feet despite her chubbiness.

Cuni always cares for others. She has a strong sense of empathy, able to tell when someone else is hurting a lot. She tries to be comforting in the silent way, just being close and letting the other dragon know she's there.

However, she's bit... cowardly. Cuni doesn't really like to take academic risks, she'd rather stay with what she knows. She it a bit more ready to play recklessly, although there is a point where she will stop.

Cuni is, generally, an innocent, playful dragonet who hasn't seen the worst yet.

Cuni was born in the rainforest. To a father with a hacking cough and a mother with a smile that never seemed to be full. They had to survive through the volcano and the shame of having a RainWing queen.

Perhaps other dragons would have tried to impress their children with NightWing culture, in the hope that the tribe would still live on, even under RainWing rule. However, they tried something... different. Just to give their dragonet the best childhood she could have.

Cuni was a bit... odd, almost immediately. She was unusually chubby, her scales almost soft, and that bright band of white across her stomach... However, her parents didn't mind, for they weren't focused on how she looked.

It was how she felt that mattered.

The little NightWing went to a school, one that had both RainWings and NightWings. No one really bothered her. She wasn't exactly hiding that stripe of white, but she was just... young and adorable. The worst she really experienced was being squished uncomfortably.

At one point, she was considered almost... popular. Not in the way of the girls who consider themselves superior. Instead, it was the type where she had a deep well of friends.

She made positive relationships surprisingly quickly. Perhaps it had something to do with her big brown, smiling eyes, or the way she managed to push conversation out of others in a soft way.

She lived a pretty happy, simple life. Her parents watched out for her, her friends were positive, and she was yet to reach the part of her life where everything got... messy.

Then her little sister was born.

Orycta just... appeared, suddenly joining the family, and all of a sudden everything seemed a little more squished.

The little dragonet was even smaller, and Cuni's parents immediately stated coddling her. Even Cuni's friends seemed a little more interested in her little sister, hugging the young dragonet and screeching about her adorableness.

Cuni was a little... envious at first. She was suddenly the second best, behind her younger sister in just about everything. And the NightWing had been there first. She was... annoyed.

However, at one point... she found herself okay with it. Her little sister was just fine, a surprisingly good, if immature companion. And perhaps Cuni had enough time in the spotlight.

She decided that she was okay with her new place a second best. And Orycta shouldn't be a rival, but a sister and a friend.

Skyfall: Cuni's father. He's always watching out for her, perhaps a bit overbearing, but she doesn't mind. He's a very good dragon, and that's really what matters.

Shimmerscape: Cuni's mother. She loves her mother very much. Shimmerscape is caring, although she's easily emotional and protective. They have mutual love, and that's enough.

Orycta: The little dragonet is... a little annoying. However, Cuni's used to it, and the little NightWing is always willing to listen to Cuni's grips. She isn't that bad.

Friends: They're... great. Cuni loves chattering among them, and has a tight knit group that doesn't have much toxicity. She spends about 50% of her time with them. 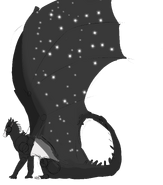 epi
Add a photo to this gallery
Retrieved from "https://wingsoffirefanon.fandom.com/wiki/Cuni?oldid=2144395"
Community content is available under CC-BY-SA unless otherwise noted.