Coypu is a MudWing who attends Jade Mountain in the Quartz Winglet. Before she attended Jade Mountain, she was a Bigwings to a troop that hatched with only three sibs; Egret (PomegranateTheRainWing854), Caiman, and herself.

Coypu is brave and loyal, but can be impulsive at times. Luckily, she has her sibs, who she listens to when they have suggestions. She is pretty extroverted and friendly, and hates to be alone for long. She tries to take control of every situation, and wants things to not be chaotic.

Coypu is an obvious bigwings. She is tall, muscular, and compact. Her wings are slightly larger than an average MudWing's, which makes sense considering her build. She is a reddish-brown with orange underscales and wing membranes. Her back spines and "markings" are a slightly darker orange.

Egret (PomegranateTheRainWing854): Finds him cute (like an adorable little brother) and wants to help him not be so self-concious.

A typical MudWing by Joy Ang 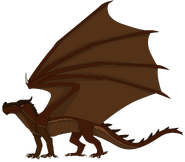 By Dewdrop the Suchomimus!
Add a photo to this gallery
Retrieved from "https://wingsoffirefanon.fandom.com/wiki/Coypu_(Pom)?oldid=2048695"
Community content is available under CC-BY-SA unless otherwise noted.