This character belongs to Winter; do not edit without permission.
Feel free to suggest ideas or things to add.

Cowry is an adventurous female SeaWing dragonet, who is attending the Academy, being part of the Sapphire Winglet. Cowry loves to read stories about adventurers, prophecies and magical objects. Her dream is it to be at least once part of a great prophecy or some world saving action. She is one of the main characters for my planned story, Wings of Fire: Symbol of Four.

Cowry has sapphire blue scales, and underscales of a slightly greenish blue colour. She has teal eyes. Her horns are short and slim, slightly curved, and dark blue in colour just like her back scales and the spikes on her back. Her glow marks shine with pale blue colour. The markings are mostly round and have soft edges. Cowry is wearing a golden pendant, which she got from Hurricane. The pendant has a blue gem embedded in it. The type of the stone is unknown.

Human!Cowry is a young adolescent with short straight hair that reaches her shoulder. Her hair is dark brown with sapphire blue tips. Her eyes are dark teal and her skin brown. She wears traditional SeaFolk clothing in blue and teal colours.

Cowry is a high spirited optimistic dragon, who doesn't like to worry about the past - things that happened cannot be changed, but the future can be. She is selfless and righteous, but also naive and stubborn. She can be careless and is easily trusting of others. She also loves taking risks and would follow a shady figure for fun.

If one interacts with her for at least a certain period of time, and it was a more or less positive interaction, she may start to consider that dragon a friend. The word "friend" is sort of like "good dragon" in her mind. If she considers someone a best friend though, that means that she highly values that dragon. It is kind of a compliment to be her best friend.

Cowry is naturally friendly and accepting. She is curious, and loves to read and learn. She has a bubbly personality, and always wants to see new things. Being alone is not very good, and she is scared of losing what is dear to her. The thought of being alone and lost also scares her.

How the two met is uncertain. It probably was a short meeting, but it was long enough for Cowry to start consider the grumpy IceWing a friend. When both of them happened to be assigned into the same winglet at the academy, Cowry started to renew their "friendship" with her old acquaintance.

It is implied that the two dragonets had met through their parents. Hurricane, who had barely any friends, immediately accepted Cowry's request to be friends. Hurricane was the one who gave Cowry her pendant, and she cherishes it a lot.

The two are similar minded individuals, which makes them get along really well.

Cowry's mother worked for the royal family at the palace. The family had it good most of the time, living in the wealthiest part of the city. Cowry's father often visited various places, and brought scrolls from everywhere for his daughter. She got fascinated by the adventures of the protagonists, which made her wish to become just like them.

Cowry is now 4 years old. She gets invited to go to the newly opened Academy after seeing a prospect for it. While she is very exited about it, she is also hesitant, because it would mean to leave the Sea Kingdom, and with it her friends and family. On the upside going to school won't only teach her new things, but also bring many new friends, many of which are of different tribes. She had only seen a few IceWings and RainWings before, given that she and her family generally stayed underwater in the capital of the city, where even if you dived up you wouldn't really meet a lot of dragons that aren't SeaWings.

The school is finally starting and she gets to see a lot of different dragons. Among the crowd is actually someone she knew: Blizzard, the IceWing. She is quick to approach him. Blizzard doesn't immediately recognise her though.

♛ Art by the creator ♛

Edited fullbody ref by Winter314; Original base by Joy Ang 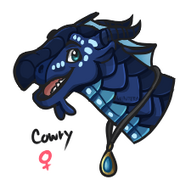 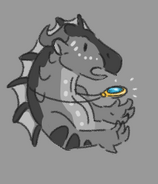 Magical Amulett
Add a photo to this gallery

♛ Art by others ♛

By Verglas the IceWing
Add a photo to this gallery

Retrieved from "https://wingsoffirefanon.fandom.com/wiki/Cowry?oldid=2190694"
Community content is available under CC-BY-SA unless otherwise noted.