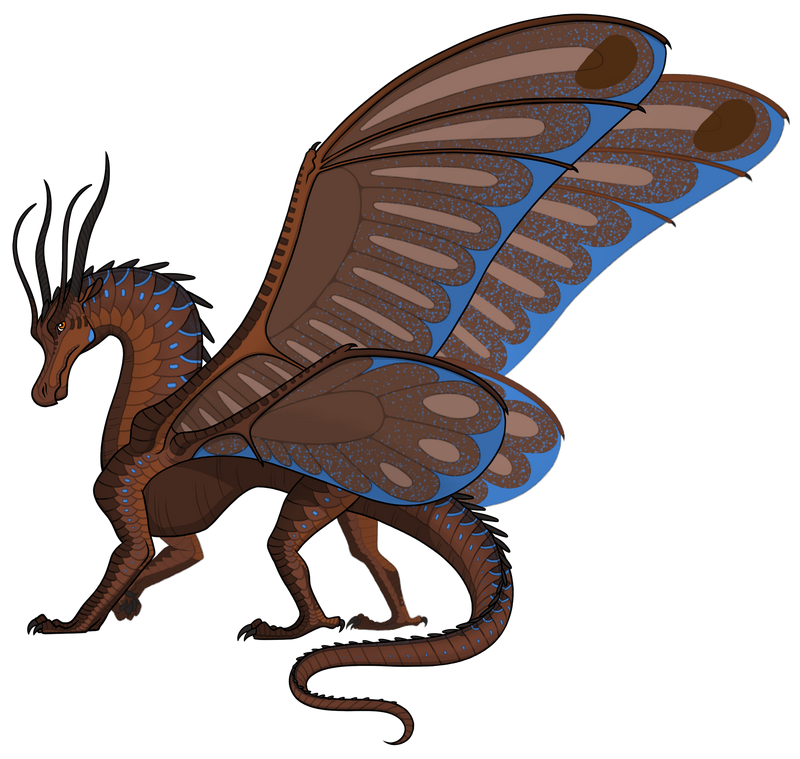 Kindred-Heart, thank you so much! It's amazing!

To free the other SilkWings from the rule of the HiveWings

A secret hideout in Cicada Hive

"My name may be Common, but I'm certainly not."

Common's appearance definitely lives up to her name. She is very hard to spot in a crowd because of her ordinariness. She is a small, thin dragon, but not enough to stand out.

Her scales are medium brown with dark brown underscales and top scales, and her horns and antennae are a very dark brown, almost black. Her eyes are a fiery orange.

Her wings are a drab brown with a single small eyespot on each top wing, at the edge of the wing between the top of the wing and the wing finger below it.

The only non-drab thing on her apart from her eyes is a smattering of shiny blue scales on her top scales and the bottoms of her wings.

Unlike her appearance, Common's personality is not similar at all to her name. When in public, she acts like it is. In the wide-open, dragon-filled space of the Hives, she acts like the typical SilkWing: Pushover. Shy. Nice. About as much willpower as a flat pancake.

Little do most dragons know, this is a front for her true personality.

Common is actually a spunky, rebellious dragon while she is in the privacy of the Chrysalis. She stands up for herself and what she believes in, and is quick to defend her friends when they're hurt, emotionally or physically. She can be overly aggressive at times, usually when she or her friends have been insulted, but is usually kind to those who believe in her cause.

She wants other SilkWings to stand up for themselves, too, and stop being a tribe mostly made of pushovers. She makes fast friends with other SilkWings who aren't pushovers, such as Danaid and Swordtail (although she doesn't actually know either of them).

Common is also very observant and quick to flee or warn her friends if she senses danger. She can pick up information and store it for a long time, even little details, but only if she cares. If she doesn't care about something, she is quick to forget it.

Talking Trees (not written by me! This wonderful story is by Gøssamer!)

Common makes a brief cameo in Talking Trees as a part of the audience to the Leanira show near the beginning.

Retrieved from "https://wingsoffirefanon.fandom.com/wiki/Common?oldid=1873901"
Community content is available under CC-BY-SA unless otherwise noted.